"Who do you trust? Me? I'm giving away free money, and where is the Batman? He's at home washing his tights!"
―The Joker to Gotham's citizens at the parade[src]

After he promised to give away millions of dollars in cash, the Joker stole the Balloons that were intended for the 200th Anniversary Parade.

The Joker put his own plans into motion to upstage Gotham City's canceled anniversary celebrations with a grand spectacle: a nighttime parade at which he would dispense $20 million in free cash. Vicki Vale and Alexander Knox were there to cover the pandemonium, and they noticed strange tanks on the balloons. In the middle of his generosity, the Joker gassed the crowd. Batman arrived in the Batwing, snatched the balloons away, and carried them out of the city. Furious, the Joker shot Bob, his number one Goon. Batman returned to make a strafing run on the Joker, who responded and shot down the Batwing with an insanely long-barreled revolver.

In Sam Hamm's drafts the money was revealed to be fake, featuring the Joker's face on it as he jokingly alluded to earlier at the Flugelheim. The comic book adaptation depicts this, as it based on that version of the story. 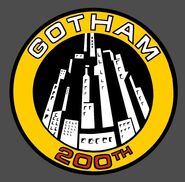 Filming the parade sequence.
Community content is available under CC-BY-SA unless otherwise noted.