Duane R. Shepard Sr. (voice)
Aaron Cash is one of Arkham Asylum's toughest security guards. Cash's left hand was replaced with a metal hook after it was severed by Killer Croc. Cash has since harbored deep fear and hatred for Croc.

One of the most senior and respected guards at Arkham, Aaron Cash is only afraid of one inmate - Killer Croc, who severely wounded Cash once during a riot at the asylum. Cash remains determined, however, to keep the asylum's inmates under control and to conquer his fears of Croc. His fateful encounter with the villain happened when a team of four other Arkham security guards were transferring Croc through the asylum. He had been struck with several tranquilizer darts, but these had worn off. Attempting to escape, Croc barreled through his guards and charged through Arkham's facilities. He had been shackled on his arms and neck, but this did not prevent him from causing much damage. Two of his guards were already down, and the others were desperately trying to fight back with their nightsticks. One of them frantically screamed for backup: "All hands! It's CROC! Tranq wore off during lockdown. Hurry!!" Croc tossed his guards through the air like a rag dolls with a bestial roar of fury, and then lunged for Aaron Cash, who happened to be in the wrong place at the wrong time. As another guard responded to the alarm, he knocked over a doctor, whom Cash bravely attempted to defend from Killer Croc. As Cash fought off the villain, the doctor's cries for help distracted him, allowing Croc to gain the advantage and tear into Aaron's left arm.

Although Croc was finally overpowered by the asylum security force and pacified, Cash was rushed to the hospital in critical condition, losing a lot of blood. After replacing his hand with his trademark prosthetic hook, Aaron remained demoralized and idled for several weeks of recovery. His usually ordered life became disrupted and disorganized. After going through a brief depression, Cash was recalled to duty at Arkham by the asylum's administrator.

He once shared a somewhat tense romantic relationship with psychiatrist Anne Carver. Carver was later murdered by an inmate named Jane Doe. During the chaos of the events surrounding Arkham Asylum: Living Hell, Cash refused to desert his post and bravely defended the asylum in the midst of the dangerous situation. Cash remains a senior member of the security staff at Arkham Asylum.

Aaron Cash has reappeared twice during the Battle for the Cowl storyline, and in 'Arkham Reborn'. He survives when a new Black Mask blows up Arkham Asylum and looses its insane inmates into the streets. Cash returns to his post as the institution is rebuilt by Dr. Jeremiah Arkham.

Cash losing his hand and deciding to return to work 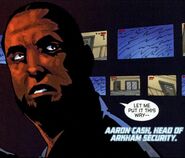 Retrieved from "https://batman.fandom.com/wiki/Aaron_Cash?oldid=218148"
Community content is available under CC-BY-SA unless otherwise noted.