One of the most senior and respected security guards at Arkham Asylum, Cash is only afraid of one inmate - Killer Croc, who severely wounded Cash once during a riot at the asylum, biting off his left hand. Cash remains determined, however, to keep the asylum's inmates under control - and to conquer his fears of Croc.

Cash is neither seen or mentioned in Arkham Origins but underneath the GCPD building in a sewer system with hidden police offices, a photo of Cash and his family is on a shelf of a stand, (the same picture seen on his desk in Arkham Asylum and again in Arkham City).

When Cash was a rookie in the GCPD, Lieutenant Gordon introduced him to Batman.

Cash and his partner were investigating a lead to the killings in the order of St Dumas and when they arrived, they had found Azrael, armed with a sword surrounded by scared children. Cash's partner, thinking he is the killer, told Azrael to step back when Azrael did not comply, he was shot. Cash's partner then told Cash to get the kids out of the building. While escorting the kids Cash forgot a child and when he came back for her saw his partner burn Azrael’s body. After the incident it was revealed that Azrael was not the killer and that the real killer had been found dead from a stab wound. Cash's partner then resigned from the police. This event would haunt Cash for years.

After a few years, Cash took up a job as a guard at Arkham Asylum.

Cash was one of the many guards present at Arkham, when the Joker was recaptured by Batman. He operated the weapons scanner during his arrival and presented much displeasure at having him return. When the weapons scanner ended up detecting a lot of armaments in the room, Cash ordered for Joker to be searched again to be sure, although he was then told that the weapons weren't actually on the Joker (it was implied that the scanner accidentally detected Batman's armament). During the Joker's takeover, Cash made his way to the Medical Facility where the room he was in filled with Joker gas. Cash and a doctor survived the attack by locking themselves in a nearby control room. Batman made his way into Patient Observation, seeing two thugs by the window with one of them contacting Joker that Cash and Kellerman are locked in. He then tells Joker that a thug named Razor didn't manage to get out in time. Possibly expecting this, Joker replied: "Oh, that will teach him to dillydally." He told them to not let anyone out of the room, including Razor. The thug on the radio said he was slowing them down anyway. Batman wasted no time in taking out the thugs, which provoked Cash to laugh and say "Go get them, Batman." After beating the thugs, Cash explaines that there was an alarm in Medical and that he saw Kellerman lying on the floor and helped him out. After realising Cash couldn't get the ventilation system working, Batman opened a vent above the room which lead to the larger room filled with gas. Here he activated the ventilation system, ridding the area of Joker gas and saving the two of them. Cash regrouped with the rest of the Medical staff and agreed to escort Dr. Penelope Young to the Arkham Mansion in order to find her notes. Inside the mansion, however, Cash and Young were ambushed by the Joker's goons. Cash told Dr. Young to flee as he and Zach Franklin held off the goons. The two were inevitably taken hostage and interrogated on the whereabouts of Dr. Young. While several armed thugs patrolled the room, two of them held Cash at gunpoint with assault rifles taken from other guards they had killed and beat him brutally. One of them struck Cash with his gun, but Arkham's toughest security guard barely flinched. At this, another goon urged, "Hit him again! Harder!" Aaron was struck again, but he only growled, "You're gonna need more than that." The thug finally said with exasperation, "Why, you...Get Joker on the radio. Tell him that [Cash] is not talking." The other henchman was more persistent however, towering over Officer Cash as he demanded, "Tell us where [Dr. Young] went! Tell us....or we'll cut off your other hand." His additional threat was responded to by Cash's unimpressed reply: 'Do what you want...I'm not talking." "Sure you will. Harley Quinn is on her way up here soon. She knows ways to loosen your tongue. And you don't want to find out how she does it!" "She can do her worst. I'm not talking. Period!" Cash even went so far as to taunt and push his captor further: "You want me to talk? Make me!" Affronted and frustrated, the inmate retorted, "I can sit here all night and watch you bleed. Why defend her [Dr. Young]. She would not help you." Turning their attention away from Officer Cash momentarily, the two goons began talking among themselves: "Cash stays here. He's ours." "That guard's gonna pay for taking my stuff when I got transferred here."

Shortly afterwards, however, Batman arrived on the scene, rescuing the two guards and learning Dr. Young's location from Cash. Both men regrouped with Kevin Liew and another security staff member in the mansion when Poison Ivy's plants took control of the island. The group was trapped inside the mansion, with the third member of security killed by the mutant plants. Batman returned to the mansion in order to learn the whereabouts of Killer Croc from Cash, after retrieving the information, Batman instructed that Cash stay put until Poison Ivy was defeated. Cash ultimately survived the attack on Arkham and returned to his post after the Joker's defeat. In the end before returning to his post, he is seen being examined by a doctor in the Medical Facility.

When Quincy Sharp, under Hugo Strange's suggestions, enacted Arkham City, he was forced to let an inmate, Jimmy Briggs, be taken to Arkham City, even though he knows he's not dangerous and in fact was one of the more exemplary inmates. Jimmy Briggs attempted to beg him not to let him be sent there, but Cash could only tell him in a defeated tone that the situation is out of his hands.

Following the opening of Arkham City, Aaron Cash found himself out of a job (as he and the other Arkham guards were replaced by Strange's brainwashed TYGER operatives). He was also troubled by his memory of witnessing Quincy Sharp's scrawling his final Chronicle of Amadeus Arkham on the floor of the cell block control room via the Asylum security monitors (this occurred during the events of Batman: Arkham Asylum, but Cash's knowledge of it wasn't revealed until Arkham City) and couldn't shake the feeling that there was something seriously wrong with the now Mayor Sharp. With no other career options available, and a suspicion that he had seen Hugo Strange once before at Arkham Asylum (seeing as how he was a security guard who failed to stop a mass breakout), he reluctantly accepted the job of running and providing protection to a small medical team charged with providing assistance to any resident of Arkham City who needed it. Cash choose an abandoned church near the Solomon Wayne Courthouse to serve as Arkham City's Medical Center and where his medical team would be based. Knowing that Strange was only providing minimal amount of medical assistance to placate those campaigning against Arkham City (such as Bruce Wayne and Commissioner Gordon), Cash was forced to beg for equipment and additional medical supplies. The first donation from Bruce Wayne (who unknown to Cash was actually his old friend & ally Batman) himself, who supplied a series of security shutters to keep the medical team and their patients within safe, along with cutting-edge body armor and medical supplies. However this didn't sit well with Strange (as their mission clashed with his plan to kill Arkham City inmates via security Protocol 10) as he knew that Batman was aiding them through his civilian identity (possibly wanting to prevent Batman from turning church into a potential stronghold for either the medical team or the Dark Knight himself), Strange locked down all supply routes, effectively shutting the medical team off from the outside world (resulting basically in Cash and his team becoming prisoners within the city, despite not being criminals or inmates themselves.)

Cash is joined by fellow former security members William North, Anne Bishop, and Eddie Burlow. However despite the church security systems and their high-tech weapons they once again found themselves at the mercy of Harley Quinn and the rest of the Joker gang, until Batman (once again) stealthily took down the minions after Quinn left them in charge of holding off Batman. Aaron Cash also professed his belief that Batman is probably the one who stands the biggest chance at putting down Arkham City, and tries to bolster the rest of his teammates morale. Unfortunately, shortly thereafter, their troubles would end up getting worse when the Riddler forced Burlow to allow him to capture everyone in the church with the threat of killing them should they refuse. Cash himself was transferred to the Riddler's main headquarters alongside several doctors, and were forced to walk on a specific path, with the threat of blowing them up by explosive-rigged helmets if he or one of the medics were to stop or attempt to escape. When informed there is no one inside the church by a patrolling TYGER helicopter, Hugo Strange orders his men not to lift a finger to help them and left Cash (and his people) to die.

Eventually, Cash gets his revenge when Batman managed to infiltrate Riddler's main headquarters and captures the Riddler, where he forces Riddler to walk with the threat of detonating the explosives (knowing full well that the explosives were actually deactivated and thus not even a threat). Cash informs Batman he will make Riddler run around all night and when Nigma figures out he's been fooled he will take him back to the church and throw him in a cell.

Later on, after Batman has saved Cash and the medical team from Riddler, a large amount of inmates attack the church looking for revenge against Quincy Sharp. While the inmates break down the doors, Azrael comes to their rescue, making himself known to the Medical team first. Cash explains his experience involving Azrael to Vicki Vale. Meanwhile the inmates finally break through the first door only to find the second door to be protected by a blast door. The inmates then call on Bane who they convince that there is Titan in the building. The guards try to fight Bane off but are unable to stop him. Azrael then arrives to their rescue taking out some inmates then confronting Bane himself who throws Azrael aside. Cash then jumps to Azrael’s defense and even scratches Bane in the face. Bane in anger nearly kills Cash but Azrael jumps to his rescue and defeats Bane by cutting off his venom tank. Azrael then calls Cash 'rookie', a nickname his partner Michael Lane used to call him. After defeating and capturing Bane, Azrael and the rest of the staff fight off the remaining inmates who flee in terror. Azrael then leaves, with Vicki Vale saying how Cash has some interesting friendships.

At some point, Cash ended up transferred to the GCPD. He proceeded to aid Batman in his missions against Scarecrow. 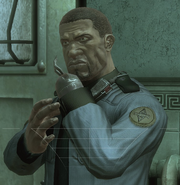 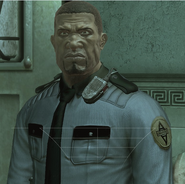 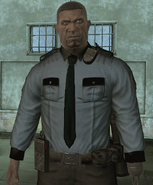 Retrieved from "https://batman.fandom.com/wiki/Aaron_Cash_(Arkhamverse)?oldid=165311"
Community content is available under CC-BY-SA unless otherwise noted.