Abuse is a fictional character in the DC Universe. Colin Wilkes was an orphan abducted by the Scarecrow and rescued by Batman. Colin was injected with venom and inhaled fear gas and became disoriented and attacked his hero, Batman. Colin later discovered that the chemical reaction of the venom and fear toxin allowed his body to change at will, and he was inspired to become the vigilante Abuse, watching over street kids and orphans like himself. After several team-ups, he became best friends with Damian Wayne.

Colin was a ten year old orphan with a history of claustrophobia, chiroptophobia, abandonment issues, paranoia and violence. He had spent time in several foster homes, and underwent therapy sessions at the Children's Hospital. He was introduced to superheroes by George, a janitor at one of the orphanages he grew up in. He started collecting newspaper clippings, which was everything he had ever owned, along with his teddy bear Rory.

The Scarecrow abducted Colin and experimented on him with a synthetic Venom, hoping Batman would not fight children. But, realizing that despite Colin's grotesque appearance he was a child at heart, Batman used his batrope to stick Colin's teddy bear to Crane causing him to attack Scarecrow instead of Batman. In the end, Batman prevents Colin from killing the Scarecrow by cutting his venom lines. Scarecrow was arrested, and Colin was moved to a hospital.

After the hospital, Colin was placed in St. Aden's Orphanage. He was still suffering from side effects of the Venom-treatment, and when he concentrated, he could activate it, changing into a giant behemoth. He decided to use this nearly indestructible form to fight crime, but knew he didn't look the part. He donned a trench coat and a hat, and ordered custom-made brass knuckle dusters that carried his new name: Abuse.

Though his first superheroing involved stopping robberies, he later turned to something bigger when he found children's bodies in the river. After investigating Humpty Dumpty's connection, he teamed up with Damian Wayne to take down the cause of the bodies: an illegal fighting ring for children, operated by Mr. Zsasz. Robin and Colin took him down, and shut down the operation. As a sign of gratitude, Robin gave Colin the Cycle of Abuse, a mortortricycle, because he thought Abuse looked stupid walking with his trench coat. 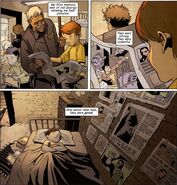 Young Colin at the orphanage 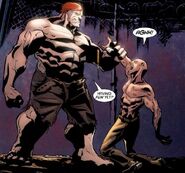 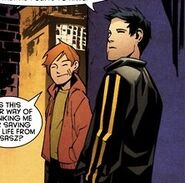 Colin hanging out with Damian
Add a photo to this gallery
Retrieved from "https://batman.fandom.com/wiki/Abuse?oldid=153251"
Community content is available under CC-BY-SA unless otherwise noted.