Batman (1960s series)
Batman: The Movie
Batman: Return of the Caped Crusaders
Batman vs. Two-Face
Alfred was Batman's, butler, friend, and guardian after his parents' death.

Alfred is Bruce Wayne's faithful butler, and is the only person who knows Batman, Robin, and Batgirl's secret identities. Alfred keeps himself busy with his duties at stately Wayne Manor, but he is often required to answer the Batphone. From time to time, he can be found dusting equipment in the Batcave, and when the Caped Crusaders' investigation enters one of his many fields of expertise, he will gladly lend a hand. Alfred is extremely knowledgeable in matters of clothing and foodstuffs, and he is also an amateur mechanic, fencer, meteorologist, and painter as well as being an expert marksmen with the short, long and cross bow; indeed, in his youth he was referred to as the William Tell of Liverpool. On extremely rare occasions, he is required to go out into the field. Before Robin was old enough to drive, Alfred would put on his own eye-mask and drive the Batmobile if Batman was unavailable.

Previous to working for the Wayne family, Alfred was an employee of the Earl of Chutney. Over the years of service to Bruce Wayne, Alfred has accumulated some modest savings, some of which he has invested in the stock market.

He also had his own mode of transportation, the Alf-cycle, a regular bicycle with runners so that Batman could be brought into town if the Batmobile was stolen or out of commission. Its features include the Two-way Alf-radio, which provides a direct communication link to the Batmobile in case of emergency. When away from his cycle, he could use a hidden transmitter in his handkerchief to communicate with the Batcave.

Alfred also sometimes goes undercover in the cause of justice. Some of the alternate persona he uses are: 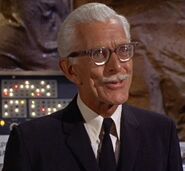 Alfred wearing a mask under his glasses 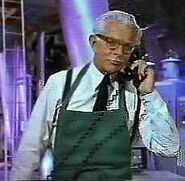