"I have no wish to spend my few remaining years grieving for the loss of old friends. Or their sons."
―Alfred[src]

Alfred Pennyworth was the butler to the Wayne family and lifelong caretaker of the orphaned Bruce Wayne. Alfred remained his loyal confidant when he began vigilantism as the Batman.

Alfred Pennyworth was raised in England. He had a brother named Wilfred, and a younger sister named Margaret Wilson. For a time, Alfred served as a butler at Buckingham Palace.

Alfred eventually came to live in Gotham City, and was employed as a butler by Dr. Thomas Wayne and his wife, Martha.

Alfred served the Waynes ever since Bruce was a child. When Bruce's parents died, Alfred raised him, and became more like a father figure than a butler.

Alfred supported Bruce's decision to become Batman and helped him on a few occasions. He also continued to give Bruce guidance, even when he was Batman. When The Joker began to terrorize Gotham, it was Alfred who helped Bruce deduce who he was, and helped him identify the deadly toxins in Joker's household products. When Vicki Vale came into Bruce's life, Bruce was confused about telling her that he was Batman. Through Alfred's wise words, Alfred convinced Bruce to do so — although it was Alfred who eventually told Vicki.

After Batman defeated the Joker, a new threat arose to their attention - The Penguin.

The Penguin was an orphaned child because his parents had found his deformed features repulsive and they tossed him into the sewers. The Penguin then arose from the sewers and becomes Gotham's new Golden Boy. Then, the Penguin decided to run for Gotham City Mayor.

Alfred and Bruce didn't believe that was Penguin's actual goal, so they researched his background. They discovered that the Penguin's true intent was to kidnap all of Gotham City's firstborn children and toss them into the sewer just as his parents did to him.

During all of that, there was Catwoman, who roamed around Gotham. Catwoman destroyed Shreck's, snooped around Batman, and tried to romance him. Meanwhile, Bruce tried to romance Selina Kyle, who was lowly assistant to Max Shreck. Alfred seemed somewhat relieved that Bruce had found someone after Vicki left.

After the Penguin was stopped, Catwoman was presumed dead after she electrocuted herself and Schreck to death. But while Alfred drove Bruce around in Gotham, Bruce saw Catwoman's shadow and tried to find her in vain. Upon returning to the car, Alfred tried to cheer up the downfallen Bruce and said: "Merry Christmas Mr. Wayne." to which Bruce replied: "And good will toward men.....and women." Then the Batsignal went off, Catwoman arose, and looked at it.

Alfred still served Bruce. When Dick Grayson came to live with them at Wayne Manor, Alfred perhaps saw a little of Bruce in him and offered him guidance. While Bruce was out one night, Alfred helps Dick settle in. After he picked up Dick's bike helmet, Alfred noticed a robin that was airbrushed on its surface. Dick said that he got the name after he saved his brother's life and quoted: "I flew in like a robin." When Dick discovered that Bruce was Batman, he wanted to help although Bruce declined. Through Alfred's help and design, Dick became Robin, and Batman then accepted him to the team.

Alfred, after years of service to Bruce, was stricken with a rare disease. His niece, Barbara Wilson, came to visit him at Wayne Manor, and intended to take him away in the belief that Alfred was only a servant to Bruce. However, Alfred assured Bruce in a later conversation after Bruce learned of his illness that Alfred's only regret in life was that he had never been able to assist Bruce in his crusade in person, and concluded that spending his life tending to heroes had been a worthy one. As Alfred's condition worsened, it was revealed that he was suffering from MacGregor's Syndrome and that the only person who could cure it was Dr. Victor Fries, aka Mr. Freeze, who was dedicated to curing the disease as it was the same one that his wife, Nora, suffered from.

As Batman and Robin searched for Freeze, Alfred told Barbara to give his brother, Wilfred, a disc, and said: "Only family can be trusted". Through Barbara's computer skills, she learned of Bruce's and Dick's alter egos and decided to help them. After Barbara infiltrated the Batcave, a computer-generated simulation of Alfred revealed that, anticipating her interest in helping his charges, Alfred had already created a suit for her, which allowed her to become Batgirl. Once Batman defeated Freeze, he was able to convince the former doctor to provide the cure, and introduced it into Alfred's system.

The next morning, Alfred was cured, warmly thanked Bruce, Dick, and Barbara for all their efforts in saving him, and Batgirl joined the team. 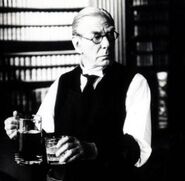 Alfred with Selina Kyle.gif
Add a photo to this gallery

Alfred assisting the formation of the Dynamic Duo in the Batcave.
Add a photo to this gallery

Alfred shows to Bruce "the cave beneath the cave" (deleted scene).
Add a photo to this gallery

Alfred with Bruce.
Add a photo to this gallery

Retrieved from "https://batman.fandom.com/wiki/Alfred_Pennyworth_(Michael_Gough)?oldid=206364"
Community content is available under CC-BY-SA unless otherwise noted.