Anatomically, the amygdala refers to the bundle of nerve cells in the brain that control emotional associations of many kinds. Aaron Helzinger's amygdala cluster was removed in an attempt to cure him of his homicidal rage (apparently by a doctor who did not understand the difference between the amygdala and the hypothalamus). This procedure resulted in Amygdala becoming exceedingly angry and was the opposite of what the surgery was supposed to achieve. Easily led due to his childlike nature, Amygdala has been the pawn of a number of Batman villains, but when properly medicated, he can be peaceful.

Amygdala first appeared in Shadow of the Bat #3 in 1992 during the story arc of the four-parter Batman: The Last Arkham which began the new line of comics. In the issue, Amygdala was forced to attack Batman by the maddened asylum administrator Jeremiah Arkham,who had decided that new inmate Batman needed to "be taught a lesson". Responding to hoots from other inmates, Arkham insisted that "this is a scientific demonstration, NOT a public spectacle". Reluctant to fight someone who was truly mentally ill, Batman fought for his life nonetheless and put down his attacker as painlessly as possible. Batman subdued Amygdala, but was then forced to face more inmates, including the Joker, Two-Face, Mad Hatter, Black Mask, Cavalier, and Egghead.

Amygdala later appeared in Part 2 of the year-long story arc Batman: Knightfall, which also saw other characters introduced in Batman: The Last Arkham return to the comic book universe, most notably Mr. Zsasz and Jeremiah Arkham. In Knightfall, when Bane and his associates unleashed the asylum's inmates into the Gotham streets, Amygdala found himself paired with the Ventriloquist, who found that his looming shadow gave him instant credibility: ("You're laughing at my little friend? NOBODY laughs at my LITTLE FRIEND!") Batman intercepted Ventriloquist, but was promptly attacked by Amygdala. As Ventriloquist escaped, Batman was once again forced to subdue the giant with a blow to the base of the skull and the villain no longer took part in Knightfall.

Imprisoned temporarily at Blackgate Prison (Showcase '94 # 3), Amygdala was included in a baseball game between the Arkham inmates and the other Blackgate prisoners.

"But your STRENGTH is UNMATCHED! You will be our star hitter!"

It all came down to this: "The bases are loaded -- and it's Amygdala at the bat." Taunted by the other team, Amygdala took off after them -- bat in hand. In the wake of the ensuing riot, all the inmates were confined to their cells.

Amygdala reappeared in 1995's GUY GARDNER: WARRIOR # 29 prior to being engaged in another riot at Arkham Asylum during the Neron-induced madness (UNDERWORLD UNLEASHED: BATMAN - DEVIL"S ASYLUM # 1). He came narrowly close to killing Jeremiah Arkham in the melee before guards overpowered him with tazers.

Aaron's violent outbursts continued for a time (as seen in flashback in Batman Villains Secret Files# 1) but eventually, Helzinger began responding to treatment and his last reported flare-up (Batman # 550) was attributed to an unprovoked attack on his cell.

Thanks to an implant, Amygdala was released from Arkham, moving south to Bludhaven. Aaron took an apartment in a building managed by Bridget Clancy in Nightwing #17, where Dick Grayson (Nightwing) was residing. Initially caught off guard by his new neighbor, Dick soon welcomed him to the building.

Aaron's new life hit a snag almost immediately when tremors from the Gotham earthquake damaged the apartment and he and his neighbors were sent out into the streets. When the owners announced their intention to condemn the structure, Aaron was invited to take part in a tenants' uprising but he demurred: "I am not allowed to get into confruth -- con-fron-TASHUNS, Mr. Law. The doctor told me that. Yes." In the end, the building was purchased by Haly Enterprises, secretly owned by Dick Grayson, and the residents got free room and board in a downtown hotel until it was rebuilt.

After Dick's apartment was rebuilt, He lived in the hero's apartment building, living in a spacious basement quarters and got a job as a warden in Lockhaven Prison. When Blockbuster was in the process of breaking Nightwing down both physically and emotionally, he blew up Grayson's apartment complex with Amygdala inside. Amygdala survived, but was heavily traumatized by the death of his friends.

In the Infinite Crisis storyline, Amygdala joined Alexander Luthor, Jr.'s Secret Society, having turned back to crime in order to survive. He has recently been seen in the 2008 mini-series Gotham Underground, drinking in the Penguin's Iceberg Lounge. 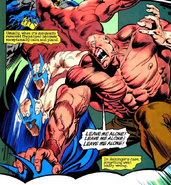 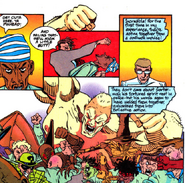 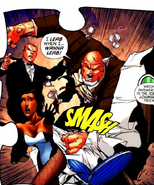 Add a photo to this gallery
Retrieved from "https://batman.fandom.com/wiki/Amygdala?oldid=214065"
Community content is available under CC-BY-SA unless otherwise noted.