Anthony Garcia was elected as mayor of Gotham City following the recent mayor Manning's assassination at the hands of the hitman Deadshot. Starting his term in office on a platform overseeing the GCPD's and new district attorney Harvey Dent's efforts of ridding the city streets of organized crime, he was even impressed on seeing Batman as useful for helping enforce the law in such task, but had a task force within the police department investigate the vigilante's theatrical taste and true identity as a means of learning something about him.

After Dent instituted a RICO case against the entire mob via a plea bargain from Lau, Garcia, although shocked at the unorthodox maneuver, nonetheless accepted it after Dent explained that the plan would work, because the mid-level mob members can't get out of jail, and even the higher ups will have to plead for minimal sentencing and thus have to endure some jail time even if they do ultimately end up getting out, though he did warn Dent that the only reason the whole plan might fly is because the people like Dent, and it's also a double-edged sword because that means if it fails, it's on him, and that there will be plenty of people who will be after him such as politicians, journalists, cops, anyone whose budget may get lighter as a result of Dent's plan, and that if they dig up any skeletons in Dent's closet, or any bad things he might end up doing afterward, it will result in all 549 criminals that were imprisoned being released back on the street, and ominously implying that they might at the very least end up having to resign from their respective positions in office if not be forced out, just before Brian Douglas' corpse is knocked against the window, startling him.

He was chosen to be personally assassinated by the Joker during Commissioner Loeb's memorial service. Lt. James Gordon pushed Garcia out of the way, and was struck in the back.

For all of Gordon's diligent work, and as top candidate to succeed Loeb, Mayor Garcia appointed him the new commissioner in the MCU's jail.

Eight years after the death of District Attorney Harvey Dent, Mayor Garcia is rumored by a Congressman to be planning on retiring Commissioner Jim Gordon from his position in the force due to the time of peace. Following Gordon's hospitalization by Bane, Mayor Garcia attended a football game, where Bane initiated a "revolution" in Gotham. It started by setting off a bomb in the private booth where Mayor Garcia and several other politicians were viewing the game from and the blast killed all of them within. Even up to his death, Garcia never knew the truth about Harvey Dent. The truth of Harvey Dent's actions were eventually revealed by Bane himself, who stormed Blackgate prison, and read documents obtained from Jim Gordon which is a written confession by the police commissioner as well as a letter of resignation. In the past, Garcia was determined to never repeal the Dent Act while in office, but it is unknown if he would have done other-wise if he had known what Harvey Dent has done before his death. 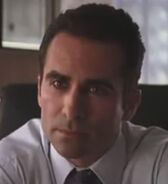