Gotham City
Axis Chemicals was a chemical plant in Gotham City. It was where Jack Napier was submerged into a vat of toxic chemicals, and was transformed into the Joker.

The plant was one of several organizations alleged to have ties to Gotham mob boss Carl Grissom, and was a frequent target of investigations by the GCPD. Grissom, worried about the continued police presence exposing his empire, sent his hitman Jack Napier to destroy any evidence of Axis Chemicals' ties to Grissom. The operation was actually part of a scheme by Grissom to have Jack and his men killed in revenge for Jack having an affair with his mistress, Alicia Hunt.

When Jack and his men arrived at the plant, the group went into the main office and broke open a vault that contained the incriminating documents. After his men removed the locks that secured the vault, Jack glanced at what appeared to be a smoke-like gas coming out of the files, indicating that they were already destroyed much earlier. Realizing that his operation was a set up, Jack warned his men to keep an eye out for anything suspicious.

At that point, the GCPD, led by Lieutenant Eckhardt and Commissioner Gordon arrived, who was tipped off by Grissom after sending Jack and his men to Axis. The gang opened fire on the police, and Napier made a hasty escape. Batman soon arrived and assisted the police by stealthily taking down several of Napier's men.

Napier turned up several of the plant's machines to dangerous levels to try and create enough chaos to escape, and inadvertently caused several of the vats to fill up with an uncontrolled mixture of hazardous chemicals. Napier made it up to the final gantry, just beyond which was the exit door. Free to escape, Napier prepared to kill Commissioner Gordon. Batman soon stopped him, but Bob put Gordon at gunpoint - which forced Batman to let Napier go. Napier did not leave, but first shot Eckhart in revenge, which killed him, then he attempted to shoot Batman. Batman deflects the bullet into Napier's face, and caused him to tumble over the side. But rather than fall, Napier grabbed the gantry. Batman tried to pull him up, but couldn't, and Napier plummeted into the vat of chemicals below. He sank into the green slime, quickly disappeared, and was presumed dead by onlookers.

Commissioner Gordon ordered his men to get Batman. However, Batman threw a smoke bomb and disappeared into the pipe works. Batman watched over Axis, and was lit from behind with the luminous Axis sign. After Batman left, a deathly white hand rose from the murky wastewater underneath the plant's drainage pipes, and several playing cards floated to the surface. The chemical submersion had changed Napier's appearance with emerald green hair, chalk white skin and red lips and thus began the origin of one of the most dangerous criminals Gotham would ever know.

The Joker used the factory as his primary base of operations and started tainting chemicals produced by the company.

Batman realized that the only way to stop the Joker's master plan was to destroy the nexus of the poisonous products - Axis Chemicals. Batman controlled the Batmobile via the communicator to drop an explosive device at a certain point in the facility, setting off a chain reaction that destroyed the most of the structure. The explosion took with it the tainted products and a few members of Joker's gang that had stayed behind to repeatedly fire at the armored vehicle with handguns. Joker fled in a helicopter adorned with his logo. A majority of his men remained at large to take control of the bicentennial parade.

While the external set was a model, many internal shots of of the factory were shot within the closed Acton Lane Power Station, which was originally a coal-fired power station near Wembley in West London, commissioned in 1899 and closed in 1983. The cast and crew complained about the conditions of the building, including asbestos issues which were only partially taken care of prior to filming. There were also catwalk sets built in Pinewood Studios, the section where Jack Nicholson sees Batman for the first time was on a set.

A miniature of the building was built by Derek Meddings' studio based on illustrations by Nigel Phelps. A miniature batmobile was also used during the explosion.

Original sketch of the factory by Nigel Phelps, while it still bore the Apex Chemicals. 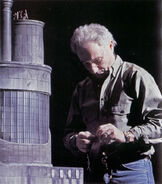 Derek Meddings tends to the miniature.
Community content is available under CC-BY-SA unless otherwise noted.
Advertisement