Teleportation
Enhanced Strength, Stamina, and Speed via the Suit of Sorrows
police and military trained tactician

"I bring a message. Dark days are coming, Batman. The prophecy is coming true. You are the warrior who will close the gates of hell. You are the one who will save this day and in doing so events will occur that you cannot stop. From the ashes of Arkham, the fires will rage and Gotham will burn. And you, you will burn too."
―Azrael[src]

Azrael appears in Batman: Arkham City and Batman: Arkham Knight. He watches Batman and can be found around the city leaving the Dark Knight cryptic clues. Throughout the game, his bio is labeled "Unknown", but once every one of his challenges is complete, his bio is completely unlocked, revealing this incarnation is indeed Michael Lane. In the sidequest involving Michael, he is labelled as "The Mysterious Watcher".

Born Michael Lane, Azrael was once a police officer based in Gotham City. His first appearance in the Batman series was in March 2009, in Azrael: Death's Dark Knight no.1. Lane was once part of an initiative to create "the ultimate crime fighter," however it turned him into a criminal. Once captured by Batman, Lane confessed his sins to a priest of the Order of Purity. He was then recruited to "fight evil as their crusader Azrael" while wearing the Suit of Sorrows and using the Sword of Sin. The Suit of Sorrows will defeat Lane if he does not keep his soul pure.

As Bruce Wayne is entering Arkham City, Azrael can be seen watching him on a roof top nearby, he vanishes when you get closer to him.

Batman encounters Azrael (birth name is Michael Lane) many times throughout the game, where he gives cryptic statements before disappearing and leaving an ambiguous symbol. He appears to be stalking Batman (hence, the side mission title "Mystery Stalker"). Once all the symbols are collected, they form a map of Azrael's location, leading Batman to the Gotham Cathedral. At the church, Azrael reveals that he has been sent to observe Batman, believing he is a warrior foretold by an ancient prophecy.

He reveals he was sent by the Order of St. Dumas to deliver the prophecy to Batman, claiming he is Gotham's only hope. He tells how Gotham City will burn, and that Batman is the "warrior" who will save Gotham, but will fall in the process. Batman remains skeptical of Azrael's prophecy, claiming he does not believe in fairy tales, but Azrael holds firm in his belief, telling Batman the message has been given and promises the Dark Knight that they would meet again before vanishing into the night.

Later on, after Batman has saved Cash and the medical team from Riddler, a large amount of inmates attack the church looking for revenge against Quincy Sharp. While the inmates break down the doors, Azrael comes to their rescue, making himself known to the Medical team first. It is later revealed that Cash knows Azrael from back when he was a rookie. Cash and his partner were investigating a lead to the killings in the order of St Dumas and when they arrived, they had found Azrael, armed with a sword surrounded by scared children. Cash's partner, thinking he is the killer, tells Azrael to step back when Azrael did not comply, he was shot.

Cash's partner then told Cash to get the kids out of the building. While escorting the kids Cash forgets a child and when he comes back for her sees his partner burn Azrael’s body. After the incident it was revealed that Azrael was not the killer and that the real killer had been found dead from a stab wound. Cash's partner then resigns from the police. Meanwhile the inmates finally break through the first door only to find the second door to be protected by a blast door. The inmates then call on Bane who they convince that there is Titan in the building.

The guards try to fight Bane off but are unable to stop him. Azrael then arrives to their rescue taking out some inmates then confronting Bane himself who throws Azrael aside, Cash then jumps to Azrael’s defense and even scratches Bane in the face. Bane in anger nearly kills Cash but Azrael jumps to his rescue and defeats Bane by cutting off his venom tank Azrael then calls Cash 'rookie', a nickname his partner Michael Lane used to call him. After defeating and capturing Bane, Azrael and the rest of the staff fight off the remaining inmates who flee in terror. Azrael then leaves with Vicki Vale saying how Cash has some interesting friendships.

"Dark days are here, Batman. The prophecy has come true. From the ashes of Arkham City, the fires are raging and Gotham is burning. I can see that same fire in your eyes. Before this night is through, that fire will consume you."
―Azrael[src]

Azrael returns to Gotham nine months after Arkham City's closure and the Joker's death and cremation, in the wake of Scarecrow and the Arkham Knight's attack on Gotham City, informing Batman that these events are what the prophecy was referring to. To gain the Dark Knight's attention, Azrael ignites flaming bat symbols on rooftops throughout Gotham and proposes to Batman that he must be the one to take his place should Batman die or retire. Batman, intrigued by the proposition in light of his current circumstances, puts Azrael through a series of tests to determine if he would be a worthy successor.

While the warrior proves his abilities time and time again, Batman and Alfred later learn that his purpose is far more insidious as the secret organization he works for, the Order of St. Dumas, seeks to seize complete control over Gotham and institute Azrael as its new protector. The organization has dedicated its life to protecting the city for over five centuries, since its formation from a splintered group of the Knights Templar during the Crusades, abducting warriors to be trained as their protectors and slaughter all who are viewed as evil, and hoarding knowledge away by capturing great world thinkers. However, with the emergence of Batman, the Order knew that the hero would need to be neutralized, especially since they believed his moral code of never killing would spell disaster for the city.

To this end, the Order recruited an army veteran and dismissed Gotham police officer, Michael Lane, who suffered a severe breakdown in the wake of his wife, son, and two siblings' deaths, as well as unstable experiments he underwent for a special military program. The program was meant to breed a suitable warrior to replace Batman, but the experiments caused Lane to suffer a psychotic breakdown and begin to target Batman, who eventually neutralized the former officer. Guilt ridden and dismissed from the force, Lane confessed his crimes to a priest, who was actually an agent of the Order and believed Lane to be an ideal fit for their next warrior.

Lane was inducted into the Order and underwent several operations, the most pivotal of which was his brain being implanted with a device that influenced his actions subconsciously via markers, derived from the Order's sacred language (similar to the marks that comprised the messages Lane left around Arkham City for Batman), being placed throughout his memories. The markers detailed a message, which altered Lane's behavior and motivations subtly, from Azrael's masters to learn everything he can about the Dark Knight in order to effectively kill him when the prophecy came to fruition, making Lane little more than a puppet to the secret society.

Lane would then don the Suit of Sorrows and the Sword of Sin, sacred artifacts created during the Crusades, becoming known as Azrael, the title given to every individual chosen to don the suit and battle injustice for the Order. With enhanced strength and agility from both his previous experiments and the suit, the new Azrael was then sent to watch Batman for years, learning his fighting style, secret identity, and his moral code in order to replicate every move and gadget within the hero's arsenal to successfully replace him. When Arkham City was announced, the Order knew that the events within the prison would spark a prophecy long foretold in their secret society of Gotham eventually burning, preparing for such a day, and sent Azrael to meet Batman and begin to gain his trust.

Only through this method would Lane become close enough to kill Batman and take his place as Gotham's protector. However, when Batman learns all of this at Oracle's clock tower, Lane follows him and makes the ultimate choice to believe Batman or give into the Order's manipulation and kill the hero. If Lane attempts to kill Batman, the hero will defeat him, destroy his sword, and lock him up in the GCPD. If Lane refuses to kill Batman however, he will overcome his masters' control, destroys the sword himself, accepts Batman's hand of friendship, and leaves to neutralize the Order of St. Dumas once and for all, closing the book on the mysteries of Azrael and the Order.

In the end, the prophecy turned out to be correct, further reinforcing the supernatural properties the organization seems to possess, as the events within Arkham City, namely Joker's death, enabled Scarecrow to consolidate the criminal underworld into one, massive campaign on Gotham. However, the end results were not what the order had envisioned as Batman himself indeed "burned", but only as a figure of terror in the eyes of criminals after his identity was revealed, as Bruce Wayne lived on and reestablished himself to continue protecting Gotham as a much more terrifying and unseen figure.

It can be assumed that, similar to his comic book counterparts, Azrael's betrayal and actions against his former masters would eventually lead to the destruction of the secret organization once and for all and Lane would go on to protect Gotham through the same moral code as Batman.

Depending on which choice he makes, Azrael would either live up to batman's legacy and become a crimefighter or be imprisoned with the same criminals he sought to bring to justice. 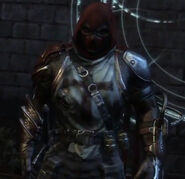 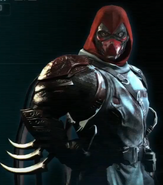 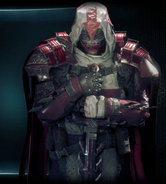 Add a photo to this gallery
Retrieved from "https://batman.fandom.com/wiki/Azrael_(Arkhamverse)?oldid=226413"
Community content is available under CC-BY-SA unless otherwise noted.