"So Batman can't help me? Fine. Let's see what Batgirl can do!"
―Barbara Gordon[src]

When the renegade artificial intelligence HARDAC attempted to replace the most influential members of Gotham (including James Gordon, Mayor Hill, and Detective Bullock), Barbara was one of the few who initially felt something was wrong. Using a few skills she picked up from her father, Barbara managed to help Batman save everyone.

Barbara Gordon takes after her father, James Gordon. Like the Commissioner, Barbara is a skilled crime fighter dedicated to wiping out Gotham City's lawbreakers—but not as a police officer. When Commissioner Gordon is framed by the notorious villain Two-Face, Barbara dons a bat costume and finds that the uniform fits her better than she had first imagined. Whether they like it or not, Batman and Robin soon realize that they have a new red-headed ally in the form of Batgirl. In her daily life, Barbara is a student at Gotham State University. Her academic skills are matched only by her gymnastic ability, which she utilizes to her full advantage as Batgirl. Batman and Robin learn to trust and rely on Batgirl's contribution to eradicating Gotham's criminal element. Unbeknownst to either, Barbara and Dick Grayson also dated.

Early on, Batman deduced the masked red-head who fought so hard to clear Commissioner Gordon could only be Gordon's daughter, Barbara. Barbara was also found to be the only organ donor (either living or dead) to Nora Fries, Mr. Freeze's wife, and she was kidnapped. However, Dick Grayson was present during the kidnapping, and though he failed to save Barbara, he was aware of Freeze's plot. Batman and Robin managed to interrupt the operation before it took place; the battle that ensued caused Freeze's lair to explode. Batman, Robin, and Barbara were able to evacuate Nora and Koonak in time, but Freeze had fallen into the fiery blast and was assumed dead. In actuality, he and his polar bears survived. In Gotham, Nora was cured.

When Dick Grayson left Gotham, Batman found himself calling on Batgirl to work with him on special cases. Eventually, Batman told Batgirl the secret of his dual identity and granted her free access to the Batcave and all its technology. The Batcomputer quickly became her domain and now she even surpasses Batman, Robin and Nightwing in cyber-expertise.

Barbara lived in a private townhouse near Gotham's trendy Park Ridge. A service lift in Barbara's bedroom closet ran down to the secret basement where Barbara stores her Batgirl crimefighting gear. In addition to costumes and weapons, the basement also serves as garage for Batgirl's highly-advanced Batcycle, a gift from Batman.

Her double life as Batgirl sometimes puts Barbara at an emotional crossroads. As the daughter of the Police Commissioner, Barbara was raised with respect for law and order, but her actions as Batgirl technically label her a vigilante. If Batgirl were ever caught and unmasked, the scandal would certainly destroy Commissioner Gordon's career. Still, Gotham is a city that breeds an extreme kind of criminal and extreme crimefighters are needed to handle situations regular cops can't. Barbara believes the good she does as Batgirl is worth the potential risk to herself and her father. She often takes on some of Batman's dangerous villains including Harley Quinn, Catwoman, and Poison Ivy. She is great friends with Kara In-Ze, also known as Supergirl, and has teamed up with her in the past, most notably when Livewire escaped and joined forces with Poison Ivy and Harley Quinn. Yet, later on, when her then-boyfriend, Dick Grayson, learned of her identity as Batgirl and got into an argument with Batman that he left Gotham and became Nightwing.

As her career in Gotham went on, Batgirl had an ongoing rivalry with the villainesses Harley Quinn, Catwoman, and Poison Ivy. She went on to play a central role in the mystery surrounding the disappearance of all of the men in Gotham City, an event that briefly brought her into conflict with the Gotham City police force, who had been taken over by a robotic duplicate of her father, and forced her to ally with her enemies. Eventually, she tracked down the true culprit, Dora Smithy, and defeated her in a final struggle at an abandoned ice cream factory, rescuing her father and ending the mayhem.

Batgirl was also with Batman when Tim Drake was kidnapped by the Joker and tortured into becoming a "son" of the Clown Prince. While Batman took on the madman, Barbara confronted Harley Quinn. In the fight, they fell off a cliff, and though Batgirl tried to get Harley back to safety, she fell into Arkham Canyon.

Barbara was the last of Batman's partners to relinquish their roles. She was also the girlfriend of Bruce Wayne for an undetermined period. She would eventually become police commissioner as her father had been. Over the years, she lost touch with Bruce Wayne. According to Barbara herself, the fact that Bruce Wayne's drive wouldn't allow him to "settle down" from his life of crimefighting eventually drove a wedge between them; the intimate relationship was terminated after a time. She eventually went on to marry District Attorney Sam Young. Whether or not she told her husband about her time as Batgirl is unknown.

Initially, Barbara was distrustful of the second Batman, Terry McGinnis; this distrust was stressed when Spellbinder used his technology to make her believe that Terry had killed Mad Stan. She also expressed a measure of resentment towards Bruce for not talking Terry out of becoming the latest Batman. At first, she strictly refused Batman's help and warned him to stay out of police matters. But she eventually formed a mentoring relationship with Terry, even helping him on occasion, especially when the Joker returned and had attacked Bruce in the cave. As she was one of the few people who knew Bruce's secret and who could be trusted, she was presumably, the person Terry contacted after Bruce was hurt and she may have helped him treat Bruce. As Bruce recovered, she briefly took over Bruce's role, sitting behind the mainframe in the Batcave providing guidance to him in the field. Barbara has since welcomed Batman back to fighting crime. When Barbara's husband District Attorney Sam Young was targeted by the assassin Curaré, both she and Terry stopped her. She saved Terry's life by throwing a discarded batarang at the killer, amazed she still "had it".

Barbara came into the line of fire again when Dr. Cuvier attempted to have her husband killed, leading to a melee in her home with Cuvier's minions and a mutated, out-of-control Batman. After Terry was returned to normal and Cuvier was defeated, Barbara personally encouraged Terry (who had recently avenged his father's death) to give up his life as Batman. However, Terry was undeterred, and answered that the small rewards were sometimes the best.

In the comics we learn that not only did Barbara becoming romatically involved with Bruce but became pregnant with a child. She discovers this soon after Dick Grayson comes back into her life. Barbara would eventually lose the baby break up with Dick and meet Sam Young soon after.

In the comics, Barbara Gordon is one of six women to have held the title of Batgirl. In the DCAU, the title is hers alone.

The original Bat-Girl was Bette Kane, the niece of Batwoman, who served as her aunt's "Robin". Barbara Gordon was the second, the niece/daughter/adopted daughter of Commissioner Gordon, after she was popularized by the 1960s Adam West TV series. In Batman: The Killing Joke, she retired from the Batgirl mantle after the Joker shot her in her spine and left her paraplegic. She currently operated as Oracle.

Batgirl in Batman: The Animated Series.

Batgirl in The New Batman Adventures.

Barbara after training with Bruce.

Barbara Gordon in Batman Beyond. 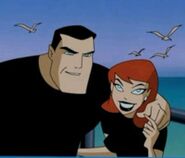 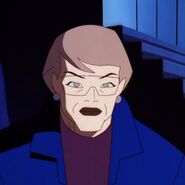 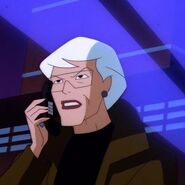