Batman
The Bat-Glider is an airborne vehicle used by Batman. Inspired by Leonardo da Vinci's glider designs, it is used by Batman to glide through the sky without being noticed. It is typically used on stealth missions instead of the Batplane or Batcopter. In recent years, the Bat-Glider's functionality has been merged with Batman's cape.

The Bat-Glider is usually depicted as a traditional hand-glider that Batman uses to navigate the night skies. The user can changes its direction can be changed by pivoting their body in desired direction and shifting his weight appropriately. A number of modifications and additions have often been made the Bat-Glider, including motorized engines and reinforcing from gunfire. Some versions are built into the Batsuit or incorporate it's cape as the Glider's material. Members of the Bat-Family, including Nightwing and Robin, have been given their own to use.

During his first year of operations, Batman utilized a hand-glider. He was known to have used one occasion, using it to get to Carmine Falcone's penthouse without being noticed. By the time Dick Grayson had joined his operations as Robin, Batman had abandoned the vehicle, instead utilizing either the Batplane or Batcopter. However, they were able to create one from scratch whilst trapped in fifteenth Italy, using it to rescue Superman.

Batman would also use a new Bat-Glider to capture Kite Man, during which it was destroyed. From that point onwards, he would occasionally use the vehicle or perform silent surveillance on Gotham's criminals. Dick Grayson would also integrate a Bat-Glider into his arsenal as Nightwing, often using it as his form of aerial travel. He also utilized it after taking on the Batman identity after Bruce's apparent death. 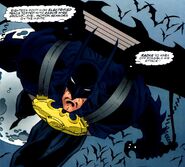