Batman
Robin
Batgirl
Oracle
Nightwing
Jean-Paul Valley
A batarang is a bat-shaped throwing weapon used by Batman. These are the most basic and commonly used items in his arsenal. A vast array sizes and types have been designed, some of them razor sharp. They can also be used as grappling hooks when attached to Batropes.

Though they are named after boomerangs, batarangs have become more and more like shuriken with time. The earliest versions were of scalloped, metal boomerangs which were used to attack opponents and returned to the thrower. Variations of batarangs include those which are able to be opened and closed (presumably so they can fit into Batman's utility belt), those which can be explosively charged and those which are electrified. A grappling hook made out of a batarang and a rope was common until Batman began using grappling hook pistols. There are also the remote controlled Batarangs.

Nightwing uses his own modified version of a Batarang, which he often refers to as "Wing-Dings", shaped after a bird. Batgirl (both Barbara Gordon and Cassandra Cain) and the current Robin also use Batman's batarangs, but the latter also possesses his own 'R'-shaped shuriken. Robin has also referred to his weapons as "Birdarangs" on occasion.

The original concept of the batarang was developed by writer Gardner Fox in Detective Comics #31 (Sept. 1939). They have since become a staple of Batman's arsenal, appearing in every major Batman television and movie adaptation to date. Following the backlash against the camp Batman television series, the franchise has avoided the overuse of the "bat-" prefix, other than the Batcave and Batmobile. Though shown prominently, the batarangs are very rarely referred to by name.

In the movie adaptations of Batman, the batarangs shown match the adapted Bat-logo of the respective movie franchise. Batman Returns also featured a computerized version which could be programmed to fly after specific targets. Batarangs are frequently featured in Batman video games as basic projectile weapons. In Batman: Arkham Asylum and Batman: Arkham City, batarangs are essential for numerous tasks. Along with a basic batarang Batman can also use a remote-controlled variant and a sonic batarang used for distracting hostiles. 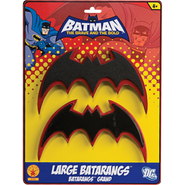 Batman: The Brave and the Bold Batarangs 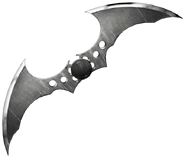 An explosive batarang in Young Justice 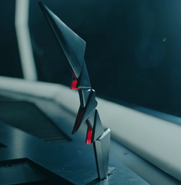 Titans Batarang
Add a photo to this gallery

Retrieved from "https://batman.fandom.com/wiki/Batarang?oldid=231562"
Community content is available under CC-BY-SA unless otherwise noted.