"That Batcave of yours is just one big toy chest, isn't it?"
―Max Gibson[src]

The Batcave is the secret headquarters of Batman, consisting of a series of subterranean caves beneath the residence of his secret identity, Bruce Wayne.

Discovered and used long before by Bruce Wayne's ancestors as a storehouse as well as a means of transporting escaped slaves during the Civil War era, Wayne himself rediscovered them when he fell through a dilapidated well on his estate. Much like Superman's Fortress of Solitude, the Batcave serves as a place of privacy and tranquility where Batman can be himself.

Upon his initial foray into crime-fighting, Wayne used the caves as a sanctum and to store his then-minimal equipment. As time went on, Wayne found the place ideal to create a stronghold for his war against crime and has incorporated a plethora of equipment as well as expanding the cave for specific uses.

The cave is accessible in several ways. It can be reached through a secret door in Wayne Manor itself, which is located in the main study, behind a grandfather clock. The panel unlocks when the hands of the clock are set to the time that Bruce Wayne's parents were murdered: 10:48. Alternately, the study entrance has been shown to be behind a bookcase which slides to the side when a secret button is pushed, revealing the "Bat-Poles," which allow Bruce Wayne and his ward to change into their Batman and Robin costumes en route as they slide down to the cave. There is also an entrance under Bruce Wayne's chair in his office in Wayne Enterprises, as shown in Batman Forever. In Batman Begins the cave is accessible through a secret door disguised as part of a large display case and unlocked by pressing a sequence of keys on the nearby piano.

Another secret entrance, covered by a hologram or a camouflaged door, allows access to a service road for the Batmobile. Another alternate entrance is a dry well- which was actually the hole that Bruce fell into when he originally discovered the cave as a child- highlighted especially during the Knightfall storyline. At one point, Tim Drake and Dick Grayson use the dry well to get into the cave, which they had been locked out of by Jean-Paul Valley during his time as Batman, with Bruce using it himself during his final confrontation with Valley to force Valley to remove his armour in the confined space.

The Batcave serves as Batman's command center, where he monitors all crisis points in Gotham and the world.

The cave's centerpiece is a supercomputer whose specs are on par with any of those used by leading national security agencies; it permits global surveillance and also connects to a massive information network as well as storing vast amounts of information, both on Batman's foes and his allies. A series of satellite link-ups allows easy access to Batman's information network anywhere in the globe. The systems are protected against unauthorized access, and any attempt to breach this security immediately sends an alert to Batman or Oracle. Despite the power of Batman's computers, the JLA Watchtower is known to have more powerful computers (composed of Kryptonian, Thanagarian and Martian technology), and Batman does occasionally use them if he feels his computers are not up to the task; on occasion, he also consults Oracle for assistance.

The Batcomputer is generally considered to be one of the world's most powerful supercomputer systems (albeit, unknown to everyone aside from Bruce Wayne, Alfred, and a few select others), as Alfred Pennyworth is able to program a replication (his "brain algorithms") of himself that can be conversed with.

The Batcave also has a collection of ancient armor due to Batman's study of military history. It includes outfits worn by European Knights, Desert nomads, and Samurai warriors throughout the centuries.

Additionally, the cave contains state of the art facilities such as: crime lab, various specialized laboratories, mechanized workshops, personal gymnasium, a vast library, parking, docking and hangar space (as appropriate) for his various vehicles as well as separate exits for the various types, trophies of past cases, a large bat colony, and a Justice League teleporter. It also has medical facilities as well as various areas used in training exercises for Batman and his allies.

The cave houses Batman's vast array of specialized vehicles, foremost being the famous Batmobile in all its incarnations (mostly for nostalgia as well as for contingencies, as all are serviceable and in excellent working condition). Batman keeps a fleet of regular cars of various models and utility vehicles such as an ambulance as well when the Batmobile would be too conspicuous for a mission. Other vehicles within the complex include various motorcycles, and various air and watercraft such as The Batplane, a single occupant supersonic jet.

Another vehicle found in the Batcave is the subway rocket, first used during the time when Jean Paul Valley was substituting for Bruce Wayne after Bane had broken his back. It let Batman get into Gotham City very fast, and could electronically clear a path via the Gotham Rail system. The cave is sometimes powered by a nuclear reactor, but most often by a hydro-electric generator.

Batman later incorporated safeguards against earthquakes and even nuclear catastrophe, outfitting the cave as a virtual bomb shelter or an enhanced panic room.

It is rumored that the world's last Lazarus Pit was constructed inside the Batcave, although the validity of this claim is suspect.

Memorabilia: Three memorabilia items often seen in the cave are a defunct full-size mechanical Tyrannosaurus Rex, an equally large U.S. penny and a Joker playing card. The T. Rex comes from an adventure on "Dinosaur Island"; the penny was originally a trophy from Batman's encounter with a penny-obsessed villain named the Penny Plunderer. Other "keepsakes" in the cave include Two-Face's original coin, Deathstroke's sword, the shroud of the Mad Monk, a collection of the Penguin's deadly umbrellas, a Joker laughing fish, one of Harley Quinn's popguns, a Scarface dummy, Bane's mask and Venom tank, Mad Hatter's top hat, the Red Hood's domed helmet and original costume, Maxie Zeus's lightning weapon, and an over-sized collection of bowling ten-pins.

Trophies held in the DCAU continuity within its future and in Earth-12 as-well as other Batman Beyond aligned continuities.

In Batman & Dracula: Red Rain, Batman destroys the Batcave in order to eliminate Dracula's followers; having lured them into the cave after a prolonged pursuit through the sewers, he sets off explosive charges to destroy the Batcave's walls at the moment the sun rises, destroying the vampires within it, before setting off additional charges to destroy Wayne Manor in order to preserve his secrets. Following this, Batman relocates to a cellar beneath a brownstone owned by Alfred Pennyworth, which serves as a lair/laboratory for Batman after he has transformed into a vampire, his new wings meaning that he no longer needed a place to keep larger equipment such as the Batmobile. Although Wayne Manor collapses into the remains of the cave, part of the tunnel system is still intact, with the now-vampiric Batman establishing his lair there after he succumbs to his vampire side, the interior now including a deep chasm within walking distance of the areas where Batman kept the giant penny and the Batmobile when he was human. At the story's conclusion, Commissioner Gordon sets off explosive charges to destroy the cave's roof, letting the sun into the cave once again in order to destroy the monster that Batman has become once and for all.

In the alternate reality of Flashpoint, the Batcave- here used by Thomas Wayne rather than Bruce- is far smaller and more run-down than the traditional version, containing merely a couple of tables for Thomas to work on his equipment and a medical area, with a conventional computer in the upper manor, reflecting Thomas's more brutal and solitary M.O. as Batman as opposed to the more sophisticated training undertaken by his son[1].

In the 31st century, the Batcave has been long abandoned, although Cosmic Boy, Saturn Girl, and Lightning Lad briefly infiltrate the cave while looking for evidence that Krypton existed to counter the xenophobic claims of the Justice League of Earth that Superman was a human given powers to fight against aliens[2]

In a possible future, Bruce Wayne has used a machine to download his memories and training- up to the point where he witnesses the bat and makes his vow to become Batman- into a series of clones of himself, each one aged to a point where they can act as Batman for around twenty-five years before they need to activate the new clone. By the time that the tenth generation clone is created, the Batcave has become a vast workshop, including a flying Batmobile, a robotic shark as a trophy, and costumes in glass cases, but the older Batman informs the new one that the contents of the cave will be burned upon his death so that the new Batman can make room for his own things while using the recorded memories to keep track of anything important from the past.[3] 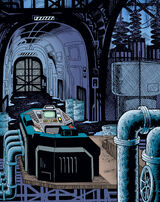 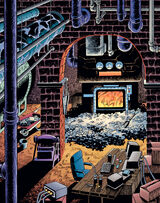 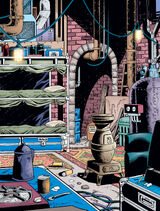 The Batcave is the best example of the comics being directly influenced by the new ideas presented in outside media adaptations, first appearing in the 1943 serial starring Lewis Wilson. 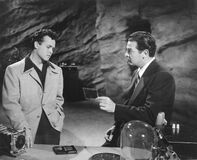 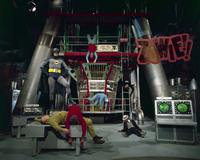 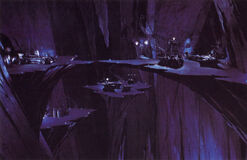 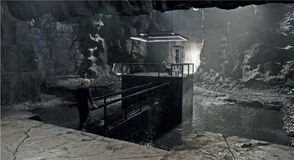 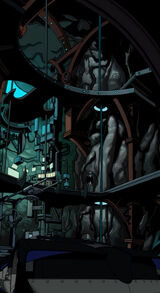 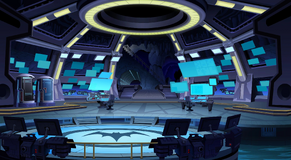 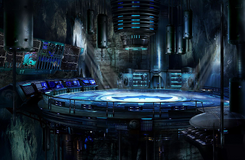 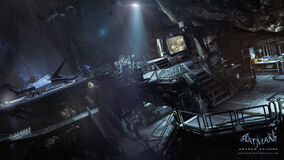