The Batcave was Batman's underground base of operations, and secondary home where he could find solitude.

Bruce first discovered the cave system below Wayne Manor when he fell into them as a child, and returned to the caves after his decision to model his crime fighting persona after a bat. Initially only using the caves to store his equipment, Bruce eventually constructed a secret headquarters within the caves to better operate independently and in secret.

The first section of the Batcave that was shown in Batman was Bruce's computer work station, which he used to view recordings that were made of various conversations within Wayne Manor during a charity ball. The cave was later fully revealed when he, as Batman, brought Vicki Vale to the cave in the Batmobile following an escape from the Joker and his Goons at the Flugelheim Museum.

Accessed via a retractable wall along a country road, the Batmobile was parked on a turntable platform that overlooked a man-made abyss of concrete and pipes, and the Batcave's power switch was located next to the platform. Several ramps wound through the cave from the platform, which lead to Bruce's elevated work station, the vault that held the original Batman armor and various other unspecified machinery. An additional work station was also shown, and possessed analysis equipment while Bruce attempted to locate Joker's headquarters.

Like the Batsuit, the Batcave underwent an update since its previous appearance in Batman. Stretched across a large chasm, Bruce spread his work stations over various rock platforms, the primary of which held his main computer work station, which was stretched out across two large circular terminals. Across from the primary platform was the Batmobile's "docking area", which acted as its parking and repair area after Batman narrowly escaped a potential trap by the Penguin. The vault that held the updated plated Batsuits was carved into one of the cave walls, with a draw-bridge-like door that allowed or disallowed access to the vault from the cave's primary platform.

The cave was shown to be accessible via a large staircase or via a hidden chute in an iron maiden, which was activated by throwing a small switch that was hidden in a fish tank replica of Wayne Manor in the manor's foyer.

The Batcave was accessed through a rotating wall in Wayne Manor's silver closet, the only room in the mansion that was kept locked. The cave could also be reached via a secret tunnel system from Bruce Wayne's Office at Wayne Enterprises, through which he rode down in a capsule.

In addition to the standard housing of the computer and equipment, the cave was originally intended to play a larger role in that film. Alfred revealed a second level to the cave, and an amnesia stricken Bruce explored the cave in order to jog his memory after an attack by Two-Face. Those scenes, however, were cut from the final film. The cave was also shown to have a canal inside of it, which provided access to the sea for the Batboat and the air for the Batwing. The cave featured a rotating turntable that rose out of the floor that held the Batmobile, and a large dome-like structure where Bruce's traditional Batsuits were stored.

A secret workbench area Sonar Batsuit prototype was kept under a tarp.

The Batcave featured a multitude of flashing lights, that were mostly in neon. On the whole, that Batcave was similar to that in Batman Forever, only it was more garish in its decoration. A capsule that contained Robin's Redbird rose out of the floor, and a long tunnel lined with neon lights lead out of the cave. The turntable that held the Batmobile returned, but was a more elaborate fashion.

Nigel Phelps sketch of the Batcave.
Add a photo to this gallery 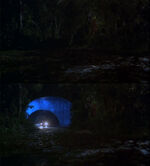 Add a photo to this gallery
Retrieved from "https://batman.fandom.com/wiki/Batcave_(Burtonverse)?oldid=220607"
Community content is available under CC-BY-SA unless otherwise noted.