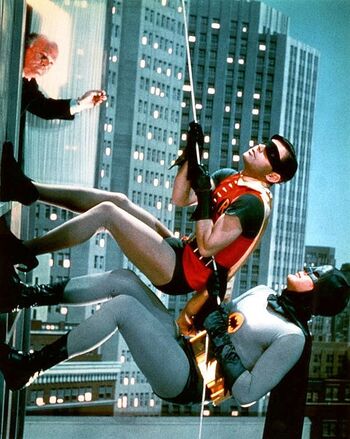 A staple of the Dozier Batman series was Batman and Robin using their Batropes to climb up a building to get the drop on various villains. As the series progressed however, the villains began to expect it and had traps set up near windows the Dynamic Duo would likely enter from.

A hallmark of the Batclimbs were celebrities appearing out of windows and speaking to Batman and Robin. These moments were considered out of canon of the episode. Characters such as Lurch (from the Addams Family), Colonel Klink (from Hogan's Heroes) and the Green Hornet and his aide Kato (from The Green Hornet) were known to appear. Many of these were filmed out of sequence with rest of the show and were done when the actors could fit it in.

In the episode The Color of Revenge of Batman: The Brave and the Bold a Batclimb was featured as part of Batman and Robin's assault on Crazy Quilt. This is in keeping with the series various references to the 1960s Series.

The first issue of Batman '66, which is based on the former television series features a Batclimb with a guest appearance by Dracula.