The Batgyro was not only Batman's first aircraft, but also his first bat-styled vehicle before even the Batmobile. It is similar to the Shadow's autogyro, a noted influence on the character. Later Batman took to using more hi-tech Batplanes and Batcopters.

The Batgyro was first used in traveling to the Monk's Hungarian castle to rescue Julie Madison. 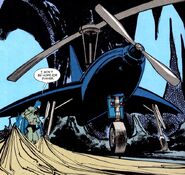 A Baygyro appeared again in Legends of the Dark Knight #8

Retrieved from "https://batman.fandom.com/wiki/Batgyro?oldid=205046"
Community content is available under CC-BY-SA unless otherwise noted.