76 minutes
Batman: Assault on Arkham is a direct-to-video animated superhero film under the DC brand. It takes place in the same universe as the series of Batman video games created by Rocksteady Studios, two years before Batman: Arkham Asylum. It was released on August 12, 2014 and rated PG-13 for violence, sexual conduct, and language.

Gotham is in great danger when the government assembles a group of villains — code named the Suicide Squad — and forces them to break into Arkham Island to retrieve top secret information stolen by the Riddler. Things take a turn for the worse when one of the Squad members (Harley Quinn) frees the Joker, who is intent on blowing up the asylum and Gotham City. Batman must use his wits and strength to thwart the wicked plans of the Joker and the Suicide Squad.

Batman has to act fast to locate the bomb and contend with not only the Joker and the Riddler, but also with Task Force X, also known as the Suicide Squad, composed of Deadshot, Killer Frost, Harley Quinn, Captain Boomerang, King Shark, and Black Spider, who are themselves trying to foil the Joker's bomb plot as well as retrieve critical data on the Suicide Squad that he stole. The Suicide Squad, likewise, also has to deal with internal friction within the group as they attempt to complete their mission. 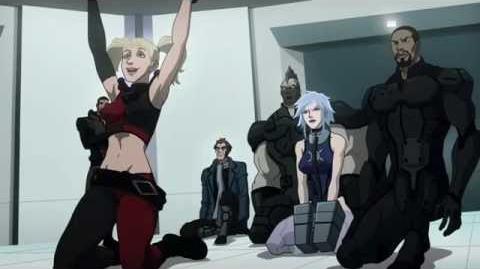