Batman & Mr. Freeze: SubZero
Batman: Mask of the Phantasm is a DC animated feature film released in 1993 and set in the same continuity as Batman: The Animated Series.

During a conference of crime bosses held in a Gotham City skyscraper, gangster Chuckie Sol is killed by a mysterious cloaked figure, known as the Phantasm. Shortly after, Batman bursts in on the meeting and is blamed for the murder. City Councilman Arthur Reeves tells the media that Batman is an irresponsible menace, then attends a party at the mansion of billionaire Bruce Wayne, Batman's alter-ego. Reeves jokingly taunts Bruce for having allowed an old girlfriend, Andrea Beaumont, to get away.

In a flashback to fifteen years ago during Bruce's college days, Bruce is seen meeting Andrea in a cemetery while visiting his parents' grave. At this point, Bruce has vowed to avenge his parents' murder by dedicating his life to fighting crime. Later, wearing a ski mask, Bruce thwarts an armored car robbery. However, when Alfred asks how the fight went, Bruce is discouraged that the robbers considered him a clownish vigilante at first, and realizes he needs to adopt a persona that will strike fear into the hearts of wrongdoers. While he is laying the groundwork for crime-fighting, Bruce is also dating Andrea, and doing things with her such as visiting a future exposition, which contains a car prototype that catches Bruce's eye. He also meets Andrea's father Carl Beaumont, who is a businessman and Arthur Reeves, who worked as Beaumont's legal adviser at the time. In his study, while talking to portraits of his parents, Bruce wonders what his parents really want for him; to avenge their deaths as a crimefighter or to continue the Wayne bloodline by marriage and fathering children? Later, Bruce tells Alfred he has made his choice: he will abandon his crime-fighting career and focus solely on his work at Wayne Enterprises, and has also bought an engagement ring for Andrea. However, Andrea mysteriously leaves Gotham with her father, ending her engagement to Bruce in a Dear John-style letter. Believing that he has lost his only chance of having a normal life, Bruce proceeds with his other choice, to avenge his parents' murder and spare other families his pain. After seeing a bat fly in the night sky, Bruce realizes he has the perfect image of terror for wrongdoers, and finally dons the mask of Batman.

In the present, the killer finds and kills another gangster, Buzz Bronski, who is killed at the graveyard shortly after mourning Chuckie Sol. Batman discovers evidence linking the two murdered gangsters; they were both lieutenants of retired mob boss Salvatore "Sal" Valestra. Valestra himself, despite already close to dying from old age and lung cancer, fears that the killer has a pattern, and that he is next on the list. He seeks the Joker, with whom he had a prior working relationship, and offers him a large sum of money to assassinate Batman for him. Unfortunately, he foolishly trades one assassin for another; rather than going after the killer, the Joker kills Valestra with Joker Venom instead. The Joker then sets up a trap for Batman, planting Valestra's boobytrapped corpse in a chair in Valestra's living room while monitoring via a camera. He then suddenly realizes Batman is not the killer when he sees a hooded figure with a skull mask triggering the bomb, but the Phantasm survives by jumping out the window. Batman, who is nearby and is attracted to the scene by the explosion, tries to catch the Phantasm, but is hindered by the Gotham Police who still believe that he is the killer and attempt to apprehend him for the string of assassinations while the Phantasm escapes. Rescuing Batman in her car, Andrea explains that she and her father had been hiding in Europe, from the Valestra mob, to whom he owed a lot of money. Carl Beaumont eventually repaid them, but that did not satisfy them; they were angered by the fact he skipped town on them and wanted "payment in blood". Batman believes that Andrea's father may be the killer.

The next day, the Joker approaches councilman Reeves at his office, explaining that the killer is someone else than Batman. When Reeves coincidentally mentions that Andrea is back in town, the Joker suddenly realizes who the killer really is, and poisons Reeves with Joker gas before leaving. At the same time, Bruce Wayne studies an old photo of the Valestra mob together with Carl Beaumont when he recognizes one of the men in the background - it is the Joker (prior to his accident) who was then Valestra's bodyguard, enforcer and hitman. Batman then sees Reeves, who is now under treatment for joker poisoning at a hospital. Interrogating him, Batman learns that Reeves was the only person in Gotham Carl Beaumont stayed in touch with after fleeing to Europe, and that Reeves sold information on his whereabouts to Valestra to pay for his election campaign. Valestra then sent his hitman (the future Joker) to Europe to assassinate Beaumont. Disgusted with Reeves, Batman leaves without offering him an antidote. Making out the puzzle, Batman goes to Andrea's apartment, but she isn't there; instead, he is almost killed by another bomb trap set by the Joker. Realizing the bomb was meant for Andrea and not for him, Batman now understands who the Phantasm really is.

The Phantasm confronts the Joker in his hideout, which is the abandoned future exposition that Andrea and Bruce visited years ago. During their fight, the skull mask is lost and reveals her as Andrea, who is intent on avenging her father's death by killing the mobsters to whom he owed money and whom ordered Beaumont murdered. In the middle of their struggle, Batman arrives. Bruce begs Andrea to give up her desire for revenge but she refuses stating that Joker and Valestra ruined her chances with Bruce and that he himself is constantly fighting for revenge. Andrea then vanishes and Batman battles with the Joker in a miniaturized replica of Gotham City. After a protracted battle which injures both of them badly, the Joker surrenders to Batman, but Andrea shows up again, determined to finish what she started. She picks the Joker up and both of them vanish in the confusion of fire and smoke with the Joker laughing maniacally, with Batman barely escaping through a waterway while a series of rigged explosions goes off.

Back in the Batcave, a heartbroken Bruce receives consolation from Alfred, stating that Andrea was obsessed with revenge and murder and no-one could have helped her. Bruce finds the locket with a photo of himself and Andrea in the cave. Meanwhile, Andrea stands on the deck of an ocean liner, alone (the fate of the Joker is not explained). The final scene shows Batman now permanently alone standing on top of a building, still in grief. The Bat-Signal emerges in the distance and Batman flies into action to continue his crusade against crime. 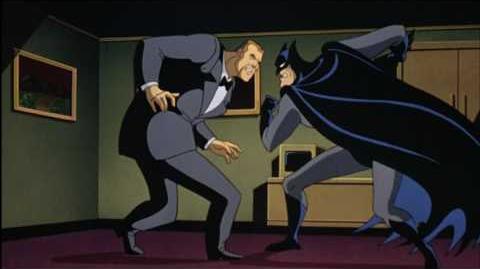 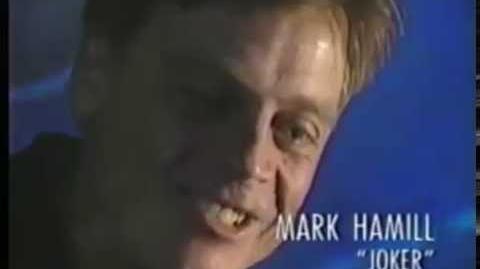 The Making Of Batman Mask of The Phantasm