Batman: Return of The Caped Crusaders

Batman: Return of the Caped Crusader is an animated feature film based on the original 1960s series.

It was created as a celebration of the show's 50th anniversary.

At stately Wayne Manor, Bruce Wayne and his ward Dick Grayson watch their favorite show The Gotham Palace. During the programming, a band that was supposed to play on the show is revealed to be hidden and replaced by four of the Dynamic Duo's greatest villains Joker, Penguin, Riddler, and Catwoman. Bruce and Dick suit up as Batman and Robin and head towards the Gotham City Police Department, where they receive a riddle from Commissioner Gordon and Chief O'Hara.

They discover that the crooks are robbing the Acme Atomic Energy Laboratory of the Replication Ray that was invented by Dr. Nichols. The Replication Ray has the power to make a perfect duplicate out of anything. After a brief fight, the criminals manage to escape Batman, but leave behind a clue that leads the caped crusaders to their lair in an abandoned TV dinner factory. While discussing what to do with the Replication Ray, Catwoman reveals her plan to make Batman join their side with a scratch from a substance called "Batnip". After Batman and Robin break in, they are defeated by the criminals and trapped on a frozen food tray heading towards a large oven. Catwoman uses her Batnip on Batman, but he is supposedly unaffected by it. The two escape the trap after the villains leave the factory.

Back at stately Wayne Manor, Bruce starts showing signs of aggression after Aunt Harriet nearly discovers the Batcave. He blames Alfred for the incident and fires him, leaving the butler to wander on the streets homeless. After days of not finding Joker, Penguin, Riddler and Catwoman, Batman figures out that the four crooks are no longer on Earth and have hijacked a space station. The two heroes go into space with the help of their Bat-Rocket.

At the space station, Joker, Penguin and Riddler betray Catwoman as they do not trust her to be on their side due to her feelings for Batman. They try to throw her out into space. She is rescued by the Dynamic Duo and aids them in defeating her former allies for revenge. Batman savagely beats the three men and recovers the Replication Ray, but Catwoman escapes in an escape pod in the process.

After the mission, Dick expresses concern towards Bruce for his behavior in the space station and at the Gotham City Police Department (where he left when Gordon was not looking without a word). Bruce kicks Dick out of the house and takes a break from being Batman, resulting in a crime spree in Gotham City.

A few weeks later, Batman returns to the Gotham City Police Department and blames the police for the increase in crime. He uses the Replication Ray on himself to replace Gordon and O'Hara as police commissioner and police chief respectively.

Batman soon replaces most of the government, jobs, and citizens in Gotham with his replicas and plans to take over the world. Dick realizes that the Batnip had a delayed effect on Batman and was slowly making him more evil over time. He then suits up as Robin and goes to Catwoman's lair to request her help in curing Batman which she agrees to do as she thinks the effects of the Batnip were more severe than she had planned.

The two take the Catmobile to the Bat Cave, where Catwoman attempts to give Batman the antidote, but Batman anticipated it and took the Bat Anti-Antidote. Batman defeats the two in a fight and leaves them to die in the Nuclear Reactor, but they survive thanks to Robin's Bat Anti Isotope Spray. Knowing they cannot take on an army of Batmen by themselves, Robin and Catwoman arrange the prison break of most of Batman's rogues gallery from Gotham State Penitentiary, like Archer, Black Widow, Bookworm, Clock King, Egghead, False Face, King Tut, Louie the Lilac, Mad Hatter, Minstrel, Mr. Freeze, Sandman, Shame, and Siren by claiming to Warden Crichton that the ball and chains and pickaxes are not in good shape. This resulted in the replaced versions carrying the villains out of the prison. While a prison guardtells Warden Crichton that Joker, Penguin and Riddler did not escape, the three of them mysteriously turn into a pile of dust.

The two confront Batman and his army on The Gotham Palace set, but they still lose even with the help of the criminals. Before Batman kills Robin and Catwoman, a disguised Alfred arrives and gives Batman a strong enough antidote to counter the Bat Anti-Antidote. Batman returns to normal, and the rest of his clones turn to dust as the Replication Ray was not strong enough to make perfect clones. Joker, Penguin and Riddler never planned to duplicate Earth.

Batman realized that his behavior change was used as a distraction by Joker, Penguin and Riddler, and that the ones they arrested were fake copies. Joker had spiked the Batnip Catwoman was using. The real ones were using the opportunity to rob the Gotham Art Museum. Joker, Penguin and Riddler just wanted to get Batman out of the way first. Batman, Robin, and Catwoman (who came as vengeance for what they did at the space shuttle) chase them to Penguin's blimp, where the villainous trio is defeated after they are knocked off the blimp to a safe location to be arrested. Catwoman tries to escape with the stolen paintings, but Batman recovers them. Unwilling to be put in a cage again, Catwoman allows herself to fall into a smokestack.

Bruce and Dick then throw Aunt Harriet a surprise birthday party acting as if that is the secret they have been hiding from her. During the party, Bruce and Dick are called away by the Bat Signal. 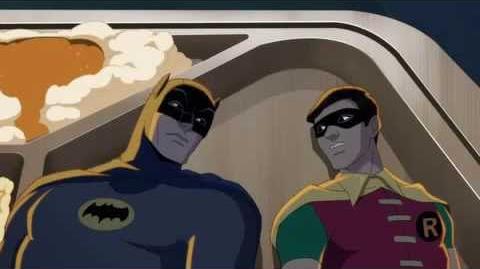 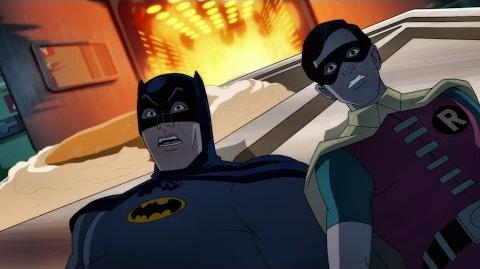 Joker, Penguin, Riddler and Catwoman
Add a photo to this gallery

Retrieved from "https://batman.fandom.com/wiki/Batman:_Return_of_the_Caped_Crusaders?oldid=198339"
Community content is available under CC-BY-SA unless otherwise noted.