Batman: Return of the Joker

This is about the video game. You may be looking for the direct to video film Batman Beyond: Return of the Joker, or the video game adaptation of the film itself

Batman: Return of the Joker

Batman: Return of the Joker (also known in Japan as Dynamite Batman) is a video game released in 1991 as an follow-up to Sunsoft's first Batman game for the Nintendo Entertainment System and Game Boy. In 1992, the game was remade for the SEGA Genesis (also known as Mega Drive outside North America) titled as Batman: Revenge of the Joker. A SNES version was also considered. The SEGA version was never released in Europe and Australia.

In the Game Boy version you could choose between the first three stages, but you had to finish them all before confronting Joker in the final stage.

The ending of the games varied: In most versions (ie, the NES, Game Boy, and SEGA versions), the ending has Joker falling down after Batman did catastrophic damage to it, with Batman fleeing the doomed island on the Batwing. In the cancelled SNES version, a narration pops up stating that the good citizens of Gotham City can sleep easy thanks to Batman stopping Joker and locking him away, before it ends ominously with Joker's laughing head behind bars and then showing the bars damaged (heavily implying that the Clown Prince of Crime has escaped yet again).[1]

Taken from the NES Game Manual:

"Precious metals are mysteriously missing from Gotham City mines. One of these metals has a highly toxic composition which is used to build explosives for missiles. Gotham City police have exhausted their resources and frantically call to Batman for help. He knows this scheme can only be the insane workings of one criminal mastermind... The Joker has returned!

Batman must follow the trail leading to The Joker's secret hideaway before it is too late! It won't be easy though. The Caped Crusader must use his new arsenal of weapons to defeat The Joker's evil henchmen and rely on his acrobatic strength and wit to overcome the obstacles that block his way.

Gotham City is relying on you to stop the Return of the Joker!"

Back cover of NES version 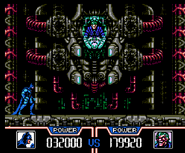 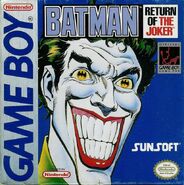 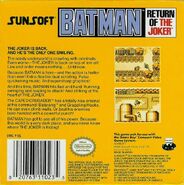 Back cover of Game Boy version 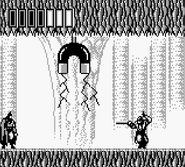 Batman: Revenge of the Joker for the Sega Genesis

Back cover of the Sega Genesis version