Batman Wiki
Register
Don't have an account?
Sign In
Advertisement
in: Batman: The Brave and the Bold, Animation, Animated Shows
English

Diedrich Bader
Wil Wheaton
Greg Ellis
Zachary Gordon
Tom Kenny
John Di Maggio
James Arnold Taylor
Batman: The Brave and the Bold is the name of an animated television series based in part on the comic book series of the same name. It made its debut on November 14, 2008 on Cartoon Network.

Based on The Brave and the Bold, the series consists of Batman teaming-up with several other DC heroes.

Each episode of Batman: The Brave and the Bold features main character Batman teaming up with other characters from the DC Universe to thwart villains or solve crimes. Beginnings usually have a small introduction and are usually not related to the remainder of the episode. The show is split into two parts: A small adventure right before the theme song, and the main adventure right after that. The teasers also help to test whether or not if the particular guest character would draw viewer interest enough to get a full story dedicated to said hero.

The show has no overarching story, instead having most episodes stand alone. For the most part, the villains faced in the series are not part of Batman's rogues gallery, though a few of his famous foes have appeared, most prominently The Joker, Penguin, Catwoman, Two-Face, and the Scarecrow. (Others in Batman's rogues gallery such as the Riddler, Poison Ivy, and Mr. Freeze have only made brief cameos on the show.) The non Batman specific villains that are featured prominently in the series have been readjusted to be Batman focused, such as the Gentleman Ghost being created due his capture (and subsequent execution) by the results of a time traveling Batman rather than maintaining his printed page history and background.

The show is purposely lighter in tone than previous Batman series, such as the critical and fan favorite Batman: The Animated Series, depicting the Dark Knight more lighthearted and playful with a "dry, ironic wit." reminisant of Adam Wests portryal. While the tone is light, the series is not afraid to touch on the subject of death, retelling the murder of Batman's parents and showing several deaths in the show including Bruce's and Joker's.

Show creators have purposely chosen to go with "lesser known" characters, forgoing the likes of Superman and Wonder Woman to highlight lesser known "A-list" characters (though Superman is indirectly mentioned several times). In many instances, the characters are those that were repeatedly teamed with Batman in the 1970s run of the Brave and the Bold comic book, such as Green Arrow, Wildcat, Plastic Man, and even the Joker; thus, all of the characters have a look and feel very akin to either their Golden and/or Silver Age incarnations. In keeping with this approach, while the show has featured major heroes such as the Green Lantern and the Flash, it consistently focuses on the lesser-known individuals to have carried the names, such as Guy Gardner and Jay Garrick, rather than the more popular, better known Hal Jordan or Barry Allen. Additionally, Batman's alter ego, billionaire playboy Bruce Wayne, has appeared as an adult once during the series, and in situations where Batman is unmasked, the show goes out of its way to keep his face hidden.

A common theme in the series is references to 60's Batman series with characters from the show and general tropes such as the Batclimb being shown. It also features numerous forgotten or overlooked aspects of the character's history from vintage comics that have never been touched on in other animated shows.

Announced characters for this show to date include: 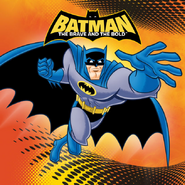