Batman: The Brave and the Bold - The Videogame

Much like every episode of the television series, every level of the Wii version of the video game begins with Batman having a battle against a teaser villain. The only ways the levels of the DS version of the game play as if they were real episodes of the show are that each level has a title screen and, like in the Wii version, the characters are voiced by the same people who voice them in the cartoon.

Both versions of the game have Batman team up with another hero to defeat the boss, or villain of the level. In the Wii version, the game supports drop-in/drop-out two-player co-op. Each level has two characters(one of them Batman). Every playable character has several special abilities that are used to beat criminals. They are also both able to summon another hero to appear and defeat all enemies on screen. The game even features animated cutscenes to carry out the plot of the levels and make the levels seem more like actual episodes of the TV Show. The DS version, while sharing many similarities with the Wii version, is drastically different. Here, the only playable character to also appear in the Wii version other than Batman is Blue Beetle. The DS touch screen is used to enable the player to switch between different weapons and switch between Batman and the guest hero of the level. It is important that the player use both characters as many of the levels will have obstacles that cannot be passed by one hero, or requires both heroes to work together. The call-in heroes from the Wii version are replaced by a team-up attack. To activate the team-up attack, the player has to work up a combo by attacking enemies repeatedly. When the combo has reached at least 10 hits, an icon depicting Batman and the guest hero in a dramatic position will appear on the touch screen. Tap it with the stylus and Batman and the other hero will combine their abilities to clear the screen of enemies and take away some chunks of health from the bosses. Batman also has a variety of gadgets. He starts the game with a batarang, but gets more weapons by completing levels.

If the DS version of the game is connected to the Wii version, Bat-Mite becomes a playable character. His abilities include dropping health items and power-ups and throwing bombs and anvils at enemies. 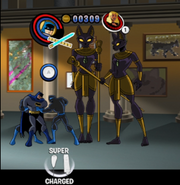 Batman fighting thugs.
Add a photo to this gallery 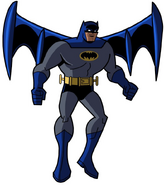 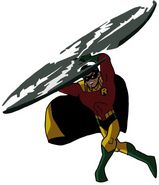 Retrieved from "https://batman.fandom.com/wiki/Batman:_The_Brave_and_the_Bold_%E2%80%93_The_Videogame?oldid=212575"
Community content is available under CC-BY-SA unless otherwise noted.