Over time the storyarc has been retitled by DC as The Dark Knight Returns in modern trade paperbacks.

The Dark Knight is set in a dystopian near-future version of Gotham City. The year is never specified, though it has been a full decade since the last reported sighting of Batman. Society has lost faith in the functioning of justice, and the current American President, named only Dickard, and whose appearance seems to be a reference to Ronald Reagan, constantly tries to keep the social order with optimistic discourses, while the Cold War is still ongoing. Virtually all superheroes, with the exception of Superman, have been forced by governmental authorities into retirement or otherwise driven away by a distrusting populace. Bruce Wayne has voluntarily retired from crime fighting following the death (under unspecified circumstances) of Jason Todd, the second Robin. In the absence of superheroes, criminals run amok, and a gang called the Mutants terrorize Gotham City.

The return of an old enemy prompts a now 55-year-old Wayne to don the Batman costume once again. Despite Wayne's funding his rehabilitation, including plastic surgery to restore his half-disfigured face, Harvey "Two-Face" Dent has seemingly returned to crime. Batman apprehends Dent, but the populace debates whether Batman's brand of vigilantism has any place in society. The media plays a large role in DKR, with the narrative broken up by news reports and "talking head" editorials debating events in the story as they unfold.

After Batman saves her from a Mutant attack, 13-year-old Carrie Kelly buys herself a knock-off Robin costume, and searches for Batman to aid him. She finds Batman at the city dump, where he is fighting the Mutants. The Mutants' leader defeats Batman in combat, but Kelly distracts him and pulls Batman into the tank-like Batmobile . Kelly attends to Batman’s wounds as the vehicle drives toward the Batcave . Once home, Batman takes Carrie on as the new Robin despite his butler Alfred's objections. With the help of retiring Commissioner James Gordon, the Mutants' leader is allowed to escape from jail, and Batman beats him in a mud fight in front of the assembled gang, which then disbands as a result of his humiliation. Some former Mutants create a new gang, the "Sons of the Batman," using extremely violent methods (up to and including murder) to "purge" Gotham of its criminal element in what they see as emulation of Batman's actions.

Meanwhile, the return of Batman has caused one of his oldest and deadliest foes, The Joker, to awaken from a years-long catatonic state at Arkham Asylum . The Joker convinces his psychiatrist, Dr. Bartholomew Wolper, that he is sane and regrets his misdeeds. Seeking to discredit Batman, whom he has crusaded against in the media, Wolper appears with the Joker on a late-night show. While the police, now led by the anti-vigilante Commissioner Ellen Yindel, attack Batman, the Joker murders everyone in the television studio (including Wolper) and escapes. Batman and Robin track the Joker to a county fair, where Batman defeats Joker in a violent showdown. Batman stops short of killing the Joker; however, the Joker finishes the job himself, twisting his own broken neck, with the intent that the police will charge Batman with murder. Batman escapes, but not before another confrontation with the Gotham police, and a citywide manhunt is now on for the Caped Crusader.

After Superman diverts a Russian nuclear warhead which then detonates in a desert, millions of tons of dust and debris fill the atmosphere, and Gotham descends into chaos during the resulting blackout. Batman and Robin train former Mutants and the brutal Sons of the Batman in non-lethal fighting to stop looting and ensure the flow of needed supplies. In the midst of nuclear winter conditions, Gotham becomes the safest city in America; the U.S. government, seeing this as a credibility-undermining embarrassment, orders Superman to take Batman down. Having been warned of the government's plans by Oliver Queen, the former Green Arrow, Batman confronts Superman. Symbolically, their duel takes place in Crime Alley, where Bruce Wayne's parents were murdered decades earlier. Batman defeats Superman in a well planned fight, but dies from a heart attack immediately afterward. After his funeral, it is revealed that his death was staged as an elaborate ruse; Clark Kent attends the funeral and gives Robin a knowing wink after hearing Bruce's heartbeat as he leaves the grave site, suggesting his silent approval of what will happen next. Alfred destroys the Batcave and Wayne Manor and suffers a fatal stroke. Some time afterward, Batman leads Robin, Green Arrow, and the rest of his followers into the caverns beyond the Batcave and prepares to continue his fight. His plan, which will take years of training and studying, is to build an army, and to bring sense to a world plagued by something "worse than thieves and murderers". He decides that this will be a good life — good enough.

The original indicia of each issue states that the series was titled Batman: The Dark Knight. Several early collected editions also left out the words Returns from the cover title.

Batman: The Dark Knight is often heralded as one of the biggest influences on the Modern Age of Comic Books, alongside Alan Moore's Watchmen. The series notably revitalized interest in Batman, which had been waning since the 1970s. Although not the first Batman work to implement a darker tone, the series helped popularize grimmer takes on the character and move away from light-hearted approaches, which were heavily associated with him due to the popularity of the 1960s series.

Elements of Batman's costumes, specifically short ears on the cowl and pouch-based Utility Belt, would be adapted into other variations and artists' designs. The evaluation of the character's psychology would be in other works, including Grant Morrison's Arkham Asylum: A Serious House on Serious Earth. Original characters from the series, such as Carrie Kelley and the Mutants, have also appeared in the main-continuities and other depictions. Several art pieces from the series, notably Batman crouching on a line, have appeared throughout the franchise and promotional work.

Plot points from the series would also make it into DC's New Earth and Prime Earth, notably the death of Jason Todd. Several moments of Batman's origin, notably discovering the Batcave as a child and the pearls falling from his mother's neck, also originate from the series. The Exoframe Batsuit used in the battle with Superman has also inspired other armors used by Batman to fight superpowered enemies, such as the Thrasher Suit and Justice Buster Batsuit. Elements of the story have also appeared in works related to Superman and Green Arrow.

Tim Burton, director of the 1989 Batman film and Batman Returns, cited Batman: The Dark Knight as great influence on his works with the character. Joel Schumacher had also pitched a live-action adaptation of the series to Warner Bros. after finishing Batman Forever and the later cancelation of Batman Unchained. However, both times had the proposal shelved in favor of both Batman & Robin and Batman: DarKnight, respectively.

Christopher Nolan's trilogy of Batman films would take several influences from Miller's Batman: The Dark Knight. The most consistent over the films including the Tumbler (the films' version of the Batmobile) being a large military vehicle intended for warfare like the Riot Tank Batmobile used in the comic. The second film, The Dark Knight, also features a group of vigilante copycats similar to the Sons of Batman. The third film in the trilogy, The Dark Knight Rises, takes the most influence from the series and even lifts several plotlines. The most notable include a retired Batman returning to fight crime after years of absence, the GCPD learning of it when he intervenes in a car chase, his confrontations with Bane mirroring both fights with the Mutant Leader, and Bruce Wayne faking his death to find a life away from the cowl. Batman also uses a Mechanized Leg Brace to enhance his strength, having lost much of it over years of retirement.

The 2016 film Batman v Superman: Dawn of Justice also took heavy influence from The Dark Knight comic series, even featuring many visual and dialogue references to the series. The film's depiction of Batman also takes influence from the series' version, including the character being at middle-age, wearing a similar Batsuit design, and being depicted as more brutal and willing to use lethal force. The film also takes pieces of dialogue and moments are directly lifted from the series, most notably Alfred's concerns about the lack of future Wayne generations, Superman being weakened by a nuclear weapon's detonation, and the hostage situation from The Dark Knight Triumphant (though the film switches the toddler with Martha Kent and shows a decisively lethal outcome for the captor). The fight with Superman also takes many elements of the climax, such as Batman using an heavily-armored Batsuit, using ultra-sonic weaponry to cause a sensory overload, and using Kryptonite gas to weaken his opponent.

The 2019 film Joker also lifts the talk-show scene from the comic, with its host Murray Franklin being based on David Endocrine. The Riot Tank Batmobile also appears in new material filmed for scene for the director's cut of Justice League, appearing in the "Knightmare" post-credits scene.

The New Batman Adventures would adapt the second issue (The Dark Knight Triumphant) as a segment in the episode "Legends of the Dark Knight". However, the story was heavily condensed and the segment removes several moments to retain a family audience, such as Batman shooting a member of the mutants and the initial encounter with the Mutant Leader.

In The Batman animated series episode "Artifacts", a future version of the series' Batman bares a muscular similar to the comic's version, such as the muscular design, larger bat-symbol and use of strength-enhancing technology. The Batman: The Brave and the Bold also pays homage to The Dark Knight Returns in the episode "The Rise of the Blue Beetle!", with the cover appearing as a poster on Jamie Reyes' bedroom wall.

The entire series was adapted into an animated feature directed by Jay Oliva and released in two parts from September, 2012 to January, 2013. A combination of the two was released on October 2013.

In the TV series Gotham, the episode "The Gentle Art of Making Enemies" has a confrontation between Bruce Wayne and Jerome Valeska (the series' first incarnation of the Joker) take place in a Hall of Mirrors. The comic's depiction of the Joker was also used as influence for Jerome's brother Jeremiah Valeska, such as him being render catatonic and returning after Bruce's return ten years later. The Arrowverse also features a version of Batman based on the comic's version of the character, with references to antagonism with Superman and dialogue lifted straight from the series' climax.

The video game Batman: Arkham Knight features a version of the Batmobile that can turn into a riot-response tank similar to the series' version of the vehicle. The game implies the design was chosen due to something darker taking control of his psyche and influencing him to implement these. However, the riot-tank features of the Batmobile are decisively non-lethal, whereas the comic's is implied to be capable of deadly force but never used. 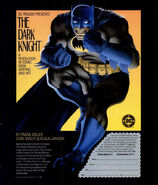