The Fire Rises is a free-to-play, browser-based real-time strategy game developed by Warner Bros. Games as a tie in to The Dark Knight Rises. The game was released on June 19, 2012.

In The Fire Rises, players take on the role of one of Bane's henchmen, tasked with looting and pillaging Gotham City on his behalf.

The game's objective is to loot as many valuables from several targets on the map while fending off waves of Gotham's security officers. As you steal more loot, new locations and crew members will become available. Each stage ends when the Gotham Police Department shows up in full force. Players lose loot for each crew member apprehended by the police. Bane gives players a countdown before the Gotham Police Department arrives, giving players the chance to make a last ditch effort to grab more goods or simply turn tail and run.

The game features eight crew members, each with their own strengths, weaknesses, and abilities. These crew members eliminate enemy forces with a variety of melee, mid-range, and far-range attacks or support allies with healing capabilities, demolitions knowledge, or quick capture speeds.

Batman: The Fire Rises features eight crew members. Their descriptions and abilities are described below.

Thugs are fast and are best for breaking into buildings and transporting loot. They can only attack in melee range and are therefor vulnerable to enemy gunfire. Thugs are available at Rank 1.

Enforcers are close to mid-range combatants. They can engage enemies with gunfire or in melee combat. Enforcers are available at Rank 1.

Hitmen are mid to far-range fighters. They exclusively attack with gunfire and are therefor vulnerable to melee attacks. Hitmen are available at Rank 1.

Saboteurs can throw Molotov cocktails to damage multiple enemies in one attack and set them on fire. They are also the only crew member able to rig cars to explode on command. The Saboteur is available at Rank 2.

Special Ability: Rig cars to explode
To rig cars to explode, players can click on the icon above any vehicle on the map. The Saboteur is unable to defend himself while rigging explosives, but can be called off the task to return fire. After a few seconds, the Detonate action becomes available, visible above the car. When detonated, the explosion will deal immense damage to all enemies, allies, and friendly turrets within its blast radius.

Masterminds are efficient mid-range fighters. They attack with a shotgun and, in addition to this, each Mastermind can place one turret on the battlefield.

Turrets are stationary, but their direction of fire can be rotated at any point in the game by clicking the turret and rotating its angle. The turret can fire on hostile opponents while this happens, allowing players to move the angle where necessary as enemies move in and out of firing range.

The Gunshot Doctor heals nearby allied units for a small amount of health over time. The Doctor does this passively and no ability has to be activated for this to occur. The Gunshot Doctor is available at Rank 4.

Catwoman is a unique crew member. While she cannot capture sewer covers, she can easily and efficiently eliminate several enemies. She is also capable of looting more goods than other crew members. Catwoman is available at Rank 5.

Only specially marked structures can be looted for goods. These structures are marked with an icon above them and glow red when the mouse hovers over them. The number of stars indicates the amount of loot the structure currently holds. This number will dwindle and turn grey as the loot is entirely removed. 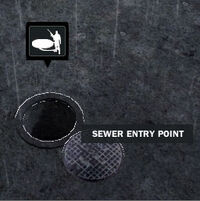 Sewer covers represent spawn and escape points for friendly units. Each sewer cover represents one location your crew members can spawn. The more sewer covers players have, the more units they can create simultaneously.

Sewer covers can be controlled by players or enemies. Covers with white icons above them designate player controlled locations; covers with red icons above them designate enemy controlled locations. To capture a sewer cover location, players select one or more units and click on the cover. It will take a few moments for units to seize locations and they will not defend themselves during this process. These units can be called off to return enemy fire.

A large portion of The Fire Rises gameplay requires strategic unit creation. To create crew members, players click on sewer covers they control and select which crew members they wish to create from a menu. Players can queue up to four units at once at each sewer cover. Unit creation features a progress bar to inform players how long it will take to produce this new crew member. Some crew members, such as the Gunshot Doctor, takes longer to create. 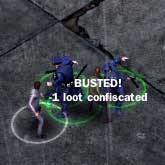 The Fire Rises features several unnamed enemy types. Basic security guards, like the Thugs, engage in melee combat while others fire guns from mid and far range. The deadlist enemy type is dressed in black, appearing similar to an officer in full SWAT gear. This enemy fires mid-range grenades at crew members dealing massive damage over an area. Lastly, police officers dressed in traditional blue garb appear when Bane's police timer runs out. These officers cannot be killed and will arrest all crew members they touch. Each arrest will subtract loot from the loot total. 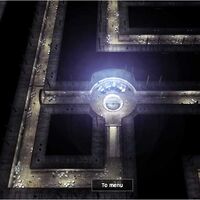 As loot is collected, the following ranks and rewards are unlocked.

Batman: The Fire Rises features four locations at launch, two of which are available now. The map of Gotham City covers three districts: Downtown, Midtown, and Uptown. The game currently features the Docks Uptown, the Construction Yard and Oil Refinery in Midtown and a Chemical Factory in Downtown.

The Construction Yard features three loot points. These include a crane and two small buildings. These structures do not have individual boxes to be carried out. Rather, each structure must be destroyed to immediately claim the loot. Their destruction is triggered when one or more crew members attempt to break in. After a relatively long period of time, the structure is demolished. Players must still retreat when all structures have been destroyed. If apprehended by police, crew members will still subtract value from the total loot collected in that location.

Retrieved from "https://batman.fandom.com/wiki/Batman:_The_Fire_Rises?oldid=127148"
Community content is available under CC-BY-SA unless otherwise noted.