Batman and Robin fight their four greatest foes; the Catwoman, the Joker, the Penguin, and the Riddler who have now joined forces and a have a dastardly plot to take over the world.

Big Ben Distilleries has a brand new invention, a 'dehydrator' with the capacity to dehydrate things such as grapes turning them into instant wine being transported to Gotham City via Commodore Schmidlapp's private yacht, however Batman and Robin get a tip that both the dehydrator and the commodore are in grave danger aboard the yacht and so they launch a rescue mission, ending with a decoy yacht, a clever holographic projection designed to distract the caped crusaders long-enough while the real yacht was being hijacked else-where being discovered, and Batman having a tangle with an exploding shark.

At a press-conference discussing the happening, Miss Kitka, a news journalist for the Moscow Bugle (secretly Catwoman in disguise) appears in a failed attempt to make Batman take off his cowl as-well as mock the vigilantes, Kitka leaves and reports back to her villain comrades as Catwoman at the lair confirming Batman survived the exploding shark attempt on his life.

After the conference has ended, Batman, Robin, Commissioner Gordon, and Chief O'Hara deduce that the one who set-up the tip could be one of the four most powerful villains ever, The Penguin, The Joker, The Riddler and Catwoman who are all on the loose and could of joined forces. Batman and Robin then leave to return to the Batcave.

At the Batcave the caped crusaders discover the source of the holographic projection of the yacht, an illegal bell-buoy and set off in the Batboat. Meanwhile Joker, Penguin and Riddler have deduced that the dynamic duo would investigate so they set off before them in Penguin's new pre-nuclear submarine. Whilst Batman and Robin find the lense in the buoy and examining it, they are trapped when Penguin activates a magnet in the bell-boy, which attracts the metallic objects in Batman and Robin's utility belts, then Penguin has Joker fire torpedoes at the bell-buoy, however using a device which reverses the polarity of objects Batman destroys the first two but is helpless against the last seeing as the device's batteries are dead luckily an unfortunate sea-creature gets in the way of the last torpedo, fooling the villains of the heroes' demise long enough for them to escape back to the docks.

At the docks Batman discovers that the Penguin under the alias, P.N Gwynne acquired the submarine from a Navy Surplus admiral who has such vehicles at his disposal, suddenly the Riddler shoots a missile into the sky from the submarine which reveals sky-writing, the sky-writing of another couple of riddles.

Back at Commissioner Gordon's office, Batman, Robin, the Commissioner and Chief O'Hara solve the riddles and are able to officially confirm Catwoman's involvement with Penguin, Joker and Riddler, realizing that they are plotting world domination. The heroes then depart for the Batcave.

Meanwhile, Penguin, Joker, Riddler and Catwoman are part of an organization known as the 'United Underworld' where they devise a new plan to kill Batman. They decide have Catwoman disguised as Miss Kitka lure a millionaire philanthropist back to her apartment where they will kidnap them both and then use as bait for Batman to come to the rescue only to fall prey to a death-trap consisting of Joker's jack-in-box and one of Penguin's exploding octopi, the chosen millionaire philanthropist is none other than Bruce Wayne, head of the Wayne Foundation and the plan is set in motion.

Miss Kitka visits Bruce Wayne at Wayne Manor where she confronts him with riddles that were left at her pent-house which is owned by the Wayne Foundation, she muses that the Riddler might have been behind it as he hates the Wayne Foundation and anything to do with it and seemingly her, as she may have stumbled on his master-plan Bruce and Kitka dismiss the riddles and set up a date for the upcoming evening as a part of Bruce and 'her' capture to lure Batman into a trap.

Bruce meets up with Robin in the Batcave as Batman and they solve the riddles left at Miss Kitka's Wayne Foundation-owned pent-house, revealing a threat on Miss Kitka's life as she has unwittingly stumbled upon Riddler's master-plan, or so it seems. However it proves to be all a trick arranged by the villains. Bruce and Kitka go out on the date later that evening and Alfred and Robin keep close watch from the Batmobile (via the micro-TV Batscanner) just in case Riddler tries to make good on is threat.

In a plot to draw the criminals out of hiding, Robin has Chief O'Hara flash the Bat-Signal to make it seem that he and Batman are racing to police headquarters, and so the criminals thinking that their out of the way, will come out onto the field to try and kill Kitka, only to been ambushed, apprehended and incarcerated, the plan however doesn't seem to work.

Back at Miss Kitka's apartment after the date has ended, the two start to get romantically involved and Robin honoring Bruce's privacy turns off the 'Bat-Monitor' monitoring Bruce and Kitka's every move, while being switched off, Penguin, Joker, Riddler and their pirate-henchmen, Bluebeard, Morgan and Quetch ambush and kidnap Bruce and Kitka. When Robin switches back on it seems too late to save Bruce and Kitka.

Bruce manages to escape the villains' clutches after he fools them into un-tying him, sadly without Kitka who was missing at the time (having changed into Catwoman before-hand).

Bruce along with Robin returns to the lair as Batman only to find a bomb, which Batman comically tries to dispose of to no avail (the places he wants to throw it containing nuns, marching band, lady with a pram, etc.). In the end Batman throws it into the air and shields himself from the explosion with some industrial iron pipes. After Robins reunites with Batman, they are confronted by the Penguin disguised as Commodore Smhidlapp, who manages to infiltrate The Batcave and rehydrate his five dehydrated pirate henchmen (seeing as he used the dehydrator on people instead of something alcohol-related before-hand, the result being every bit moisture in the person's body being extracted dehydrating them rapidly reducing them to a pile of dust). However since the hench-men were improperly rehydrated with tainted water, loaded with atomic waste, from the Batcave's water system (used to recharge their atomic pile) their biological structure is highly unstable and the slightest touch knocks them out of existence. The Penguin then hijacks the Batmobile in order to meet up with the other villains at the United Worlds building in a bid to dehydrate the United World's security council members, using the Dehydrator to hold the entire world for ransom. Batman and Robin in the Batcycle and Batcycle Go-Cart go to the Batcopter and take it to get to the United Worlds building before the villains do, from the submarine the Riddler fires one of his skywriting riddle rockets which coincidentally hits the Batcopter causing it to crash, Batman and Robin survive thanks to the copter's soft landing and run on-foot to the building, they arrive too late as the security council has already been dehydrated and the villains escape upon gassing the building's guards, fleeing in the submarine.

In the Batboat, Robin causes the submarine to surface with rounds of powerful Bat Charges and a large and fierce fist-fight ensues with our heroes being victorious, but Batman is left heart-broken upon discovering Kitka's true identity as Catwoman. All villains are left bound on the submarine drifting towards shore for the U.S. Coast Guard to come and collect and authorities to incarcerate, all is well until the captive Commodore Schmidlapp comes in, trips over and sneezes mixing the dusts that are the dehydrated members of the United World's security council together.

Back at the Batcave, using an elaborate filter Batman and Robin separate the mingled dusts. Robin requests to leave the dusts the way they are so the members of the security council will be rehydrated mixed between the races seeing how overt racism is in America and the rest of the world, this happening possibly setting an example. His requests are denied, however at the United Worlds building. However, they are soon in-fact ironically fulfilled in a way when the members of the United Worlds security council are rehydrated with mixed languages, Batman's final words on the matter are that he hopes that this 'Mixing of Minds' will do more good than harm, and as the countries of the United Nations rejoice for the security council being rehydrated but remain baffled at the change in the members, Batman and Robin climb out of the window of the United World building to an uncertain future. 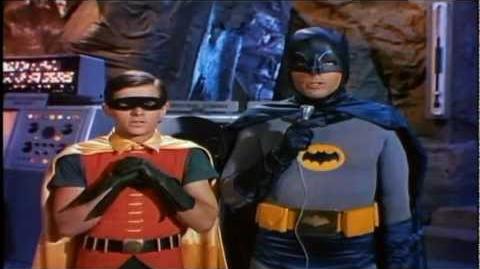 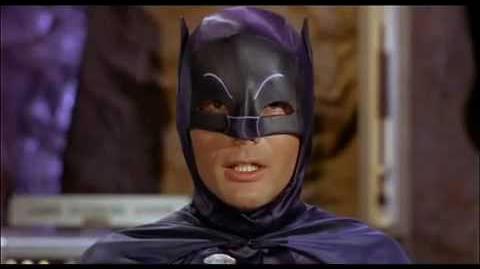 Dozier hired Leslie H. Martinson to shoot the movie who previously directed season one episodes The Penguin Goes Straight/Not Yet, He Ain't of the television show. Going with a tv director rather than a legitimate feature film director made it seamless with the series and kept costs down. Dozier also retained creative control and was hands-on producer, present throughout filming.