Batman: The Video Game is a video game inspired by the 1989 film Batman. The game was developed by Sunsoft and it was released in 1989 in Japan for the Famicom, but mouths later in 1990 was released in North America for the Nintendo Entertainment System and other mouths later in Europe. The NES version of Batman is a platform action game that features locations from the 1989 movie. It contains five levels culminating in a showdown with the Joker in the bell tower of Gotham Cathedral.

The game has a feature that was unusual to side-scrolling platform games at the time, largely to the NES itself. Unlike the other Batman game that was released for the Mega Drive/Genesis, Batman has the ability to wall jump, which is reminiscent of wall scaling in Ninja Gaiden. He is also able to use three projectile weapons: the Batarang, Batdisk, and Bat Speargun, which are powered by pellet cartridges.

The citizens of Gotham City are busy planning the city's 200th Anniversary Festival, but there is not much to celebrate. Crime and violence rule the city.

After Jack Napier falls into a vat of chemicals he became "The Joker", and now he has terrorized the population by spreading poisonous DDID Nerve Gas all over town.

The only man who can free the city from the Joker's evil clutches is one and only "Batman".

Batman recalls the Joker as the murderer of his parents when he was a kid, and Batman with full force has to defeat the Joker and save the good people of Gotham City and avenge his parents death.

Batman is armed with special weapons and acrobatic strenght. He must defeat different types of enemies and machines to come face-to-face with the Joker on the final battle in the Cathedral.

Batman has to face many villains in the game besides the Joker:

The prototype version of the game had some significant differences, such as a 1UP icon and entirely different cut-scenes. The cut-scenes are pixelated takes on Brian Bolland's panels in Killing Joke. The game's original last boss was Firebug and there was no Joker boss. Instead, Batman defeats the Joker in the ending cut-scene. The art and dialogue were changed from the prototype to the final version to better reflect the look and events from the movie.

The NES version has received positive reviews by critics and players. Allgame editor Brett Alan Weiss called the game "the best superhero game for the NES". The NES version is also considered by many players and reviewers to be one of the most difficult games ever released for the system.

The game is also remembered for having one of the best soundtracks for the NES history, composed by Naoki Kodaka. 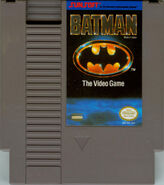 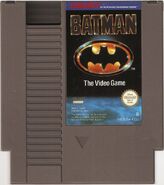 advertisement
Add a photo to this gallery
Retrieved from "https://batman.fandom.com/wiki/Batman:_The_Video_Game_(NES)?oldid=206479"
Community content is available under CC-BY-SA unless otherwise noted.