Batman & Robin
Batman & Robin is a video game inspired by the 1997 film of the same name. It was developed by Probe Entertainment and released in 1998 for the PlayStation. The cover features a photo of George Clooney in his primary costume taken by Herb Ritts.

The game was delayed a full year after the movie's release due to its ambitious open-world Gotham City environment, predating Grand Theft Auto III.

The PlayStation game uses elements of a Sandbox style game, such as real time events, traffic simulation and civilian population. The player can choose one of the film's three heroes, Batman, Robin or Batgirl. Each character uses a unique vehicle. Batman drives the Batmobile, Robin the Redbird motorcycle and Batgirl uses the Batblade. In the game, the player travels around Gotham City and completes various individual missions, such as preventing Mr. Freeze from robbing a bank. Most of the events are not triggered, instead each event occurs at a certain time. For example, Mr. Freeze's bank robbery occurs at 7 p.m. The player must find clues and discover the plot with the help of the Batcomputer. If the player cannot find enough clues, the event occurs, failing the mission. Some situations are derived directly from the plot of the film while others were conceived for the game.

Aside from the original PlayStation discs the game was made available on emulator sites in recent years. 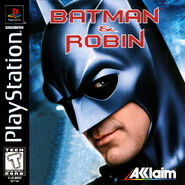 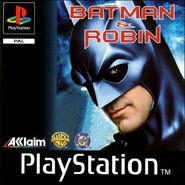 PAL region cover
Add a photo to this gallery
Retrieved from "https://batman.fandom.com/wiki/Batman_%26_Robin_(PlayStation)?oldid=228343"
Community content is available under CC-BY-SA unless otherwise noted.