Batman and Robin
The Batman is a 1943 film serial produced by Columbia Pictures. It serves as one of the first adaptations of Batman in other media, as well as the live-action debuts of him, Robin, Alfred and Linda Page. It is directed by Lambert Hillyer and written by Victor McLeod, Leslie Swabacker, and Harry L. Fraser. The cast stars Lewis Wilson as Batman, Douglas Croft as Robin, and William Austin as Alfred.

The film's plot dealt with Batman and Robin's struggle against Prince Daka, a Japanese spy who invented a device that turns people into pseudo-zombies.

The film was notably influenced by the wartime efforts of the United States government, due to production taking place in World War II. The plot of these serials adheres to common practices of U.S. wartime propaganda, as they were released during the height of American involvement in World War II. The plot also asserts that Batman and Robin are on special assignment for the U.S. military rather than vigilantes focusing on street-level crime. This was likely changed due to the Motion Picture Production Code used in Hollywood at the time, which forbade "heroic characters" taking the law into their own hands.

During pre-production, it was planned for the main antagonist to be the Joker, with Naish originally cast in the role. However, due to the wartime effort and changes made to "appeal to wider demographics", producers changed the villain to Prince Daka. Indications towards the originally intended villain can often be seen in the film, such as the costumes worn by Daka and the carnival lair. Had Joker been used, it would have been the live-action debut of character long before the 1960s series' version.

The serial, like most propaganda films from the time, has often faced criticism in subsequent years, often for its racist notions and language used. These can be seen in characters comments on Daka's "ethnicity" and alignment, including Batman himself. The film also features a notably comments in favor of Japanese-American interment, which was at its height during the time. Daka was portrayed by Naish, a Caucasian actor who wore "yellow-face" makeup while in the role. In subsequent rereleases and showings from the 1980s onwards, the racist dialogue has often been edited out or removed.

The serial is also notable for many production mistakes and plot holes. These range from Batman losing his cape during a fight in one shot, only for it to reappear in the next, and continuity errors, such as Chapter 1 mentioning that Batman operates in "Gotham City" but receiving a letter addressed to "Los Angeles" in Chapter 5. One of the most notable of plotholes is the transitionary cliffhanger between Chapter 5 and Chapter 6, where Batman survives a plane crash that kill two of Daka's henchmen. The explanation behind his survival is never given both on screen or the shooting scripts. 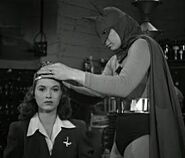