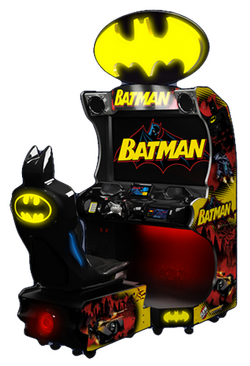 Batman is a vehicular combat game developed by Specular Interactive and distributed by Raw Thrills. The game was released as an arcade cabinet in 2013 and can be single-player or multi-player (if there is a linked cabinet).

In Batman, players can choose one of ten different Batmobile models from different versions of the character. The game consists of vehicular combat missions against the Joker, Bane, Mr. Freeze and their respective goons across Gotham City. One mission in each story sees the player fly the Bat from The Dark Knight Rises, released the previous year. The game features upgradable weapons such as Sky Drone, Batarangs and Battering Ram.

The game has a profile system for players to save their game progress and resume at a later time.

The ten different Batmobiles are:

The arcade cabinet for Batman consists of over 500 color shifting LEDs, a Batman-styled seat and steering wheel with force feedback, as well as a large glowing Bat emblem above the cabinet. Different on-screen action will trigger the various lighting effects and patterns of the cabinet.

Development for Batman started in 2011 at Specular Interactive and they worked with Warner Brothers to build all of the Batmobiles and the Gotham City environment. According to Steve Ranck, the Specular Interactive team spent a lot of time building Gotham City, which in this game "is nearly 10 square miles of various suburbs, unique neighborhoods, elevation changes, tunnels, bridges, hills, dirt roads, jumps, secret paths, etc.

Also according to Steve Ranck, the game contains 20 characters "with nearly 1,000 lines of spoken dialog, 3 fully animated boss characters" and 36 missions over 6 stages.

Batman uses licensed visibility software, Umbra 3, to handle the occlusion culling in its game. The system has been developed by Umbra Software.