Batman
Batman for the PC Engine is an action-puzzle game, developed by Sunsoft and released in 1990 only in Japan. For unknown reasons the game was never released in North America for the TurboGrafx-16. The game is based on the 1989 Tim Burton feature.

The game has action puzzle elements similar to games like Cratermaze and Bomberman, where the main goal is to collect certain objects to move to the next level. Batman uses his Batarangs to attacks the Joker's henchmen.

The game has 4 Levels, each one has 12 stages, the Cathedral Level only had one.

The PC Engine Version was originally going to be an Action, 2D Platformer just like the NES, Game Boy and SEGA Genesis/Mega Drive versions that Sunsoft worked previously, this prototype version was shown in a japanese gaming magazine. But for unknown reasons the game ended up being completely different, to be an Action, Puzzle game. And for other unknown reasons the game was only released in Japan. 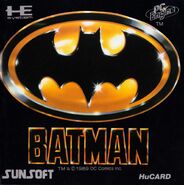 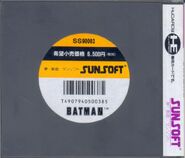 Card
Add a photo to this gallery
Retrieved from "https://batman.fandom.com/wiki/Batman_(PC_Engine)?oldid=215208"
Community content is available under CC-BY-SA unless otherwise noted.