"I don't care how many demons he's fought in how many hells. He's never fought us. Not us united."
―Bruce Wayne about Steppenwolf[src]

Batman is the alias and second identity of billionaire Bruce Wayne, son of Thomas and Martha Wayne. Becoming the Dark Knight, he waged war against crime in Gotham City.

Having witnessed his parents' death at the hands of a mugger as a child, young Bruce Wayne resolved to rid Gotham City of the criminal element that took their lives. With the aid of his butler Alfred Pennyworth, who operates mostly within the Batcave, Bruce became a mysterious caped crusader known as "The Batman". For years Bruce fought in his crusade, taking on a ward in Robin who helped him protect Gotham. However, through unknown circumstances, Robin was killed by the Joker, who left a taunting message ("Hahah, Joke's on you Batman") spray painted on his suit. Bruce would keep the Robin suit enclosed in a glass case found in the Batcave. This event led Batman to become much more brutal but continued his crusade on crime.

When the world was introduced to Superman, the Earth was invaded by General Zod and his Kryptonians, which led to a battle taking place in Metropolis. Arriving in Metropolis, Bruce Wayne tried warning his friend Jack to evacuate the Wayne Financial Building. However, while Superman was fighting Zod, Wayne's building was among the structures destroyed with at least one of Bruce's employees, Wallace Keefe, surviving but with the cost of his legs. After saving a girl, who lost her mother, Bruce held her among the collateral damage as he stared at Superman, who he made responsible for the countless deaths.

About two years later, Bruce went to a very dark place that was rooted in trauma. As Batman, he became more brutal on how he deals with criminals, and among his "new rules" branded at least one criminal. He was also determined to go to war against Superman, going through great lengths to stealing Kryptonite from Lex Luthor, who manipulated the two into fighting by kidnapping Superman's mother Martha Kent. Batman and Superman would initially fiercely battle one another, with the former wearing a armored exoskeleton suit as well as using a Kryptonite grenade launcher and spear. Before Batman can kill Superman with the spear, Superman urges Batman to "save Martha", whose name is also shared with Wayne's late mother. Lois Lane arrives and explains the situation, convincing Batman that Superman is not a threat. Upon learning of Luthor's plan, Batman helps rescue Martha while Superman confronts Luthor on the scout ship. With the help of Diana Prince, aka Wonder Woman, Batman and Superman join forces to take down Luthor's creation, Doomsday. Superman ultimately kills Doomsday, but succumbs to his own injuries and seemingly dies.

After confronting Luthor in prison, Batman learns that a more powerful threat is coming to Earth. Bruce Wayne later attended a funeral for Clark Kent in Smallville, where Wayne reveals to Prince that he plans to form a team of metahumans to help protect the world in Superman's absence. After they leave, the dirt around Clark's coffin begins to levitate.

Born into the wealthy Wayne family, Bruce Wayne had an idyllic childhood. But after his parents were gunned down in front of him, Bruce dedicated his life to battling the criminal element that took their lives. He trained extensively for years, training his mental and physical abilities to their peak. Around his first meeting with Superman, Batman can be described as a man who bears the scars of a seasoned crime fighter, but retains the charm that the world sees in billionaire Bruce Wayne.

In the 20 years of crime-fighting, Bruce Wayne became a psychologically damaged and almost sociopathic individual. And while Batman had a moral code to never kill, he changed his rules after the world was introduced to Superman in the destructive battle with General Zod in Metropolis. Having saw most of the battle himself, Bruce witnessed the destruction of the Wayne Financial Building, which resulted in his friend Jack's death and Wallace Keefe being crippled. After years of trial and tribulation, Bruce went to a very dark place that was rooted in trauma. As his butler Alfred Pennyworth explained it, rage and the feeling of powerlessness can turn a good man like him into a cruel one. This was the case as Batman showed less concern for the criminals he fought, and started using brute force or simply branding them. Bruce also showed determination to go to war against Superman, who he believed was a potential threat (partly because of an apocalyptic dream and Lex Luthor's manipulations), despite Alfred's multiple attempts to dissuade him. Batman ultimately realized that Superman was not his enemy and, after the latter's supposed death by Doomsday, he sought redemption and the means in making the world better. 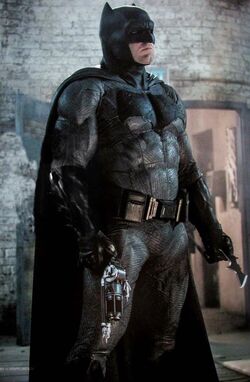 Batman has no inherent superhuman powers, relying on his knowledge, detective skills, and athletic prowess. He trained extensively to achieve mental and physical perfection, in addition to mastering martial arts, detective techniques, and criminal psychology. Dressing as a bat to prey on criminals' fears, Batman fights crimes with the aid of specialized gadgets and vehicles, operating out of his secret Batcave.

Director Zack Snyder's first choice for Bruce Wayne was Josh Brolin, who turned down the idea of playing Batman in a crossover about fighting Superman. Brolin went on to portray Thanos in the Marvel Cinematic Universe and Cable in Deadpool 2. Richard Cetrone and Albert Valladares were Ben Affleck's fight doubles. The stunt team and coordinators' contributions have had a more positive critical reception compared to all the other aspects of this incarnation.

While Ben Affleck's performance in Batman v Superman was well-received by both critics and fans, this version of Batman was greatly criticized for his willingness to kill enemies and use of weapons, including guns. This seemed particularly egregious due to the then-still recent Dark Knight trilogy, where Batman had stuck to such ethical codes unless absolutely necessary. The film's predecessor, Man of Steel, had also received similar criticism, especially in regards to Superman apparently endangering lives during the film's fight scenes. This criticism is also leveled at the Burton films' Batman, particularly in the last third of his first film. However, that version was willing to also kill members of his rogues gallery, whilst the "Snyderverse" versions are revealed to be alive in promotional material. Batman's appearances in Suicide Squad also shows him arresting Deadshot and even saving Harley Quinn, raising further criticisms such as whether Batman kills common thugs but leaves the more dangerous criminals alive.

In addition to star as Batman, Affleck has also been hired to write and direct a solo film for his version of the character titled The Batman. According to reports that surfaced in 2021, his treatment would have pitted Batman against Deathstroke, who sought revenge for the death of his son at the Dark Knight's hands. The assassin would have attempted to destroy both the lives of Bruce Wayne and Batman. The film would also explore themes of insanity and delve into Batman's mental health. The post-credits scene seen in the director's cut of Justice League was to set up this film. However, Affleck dropped out of production due to concerns about his wellbeing, handing duties over to Matt Reeves. The project then was repurposed into a completely separate The Batman film, starring Robert Pattinson as another incarnation of the character.

In interview with GQ Magazine, Snyder revealed his plans for the Justice League film series, including Batman. According to him, Justice League 2 would have featured the League coming into conflict with the Injustice League, who were under the control of Darkseid. When the League go to Apokolips to fight the groups, Batman would have remained on Earth to protect Lois Lane from his forces. However, due to information obtained from Lex Luthor, Darkseid would have attacked and killed her: this event causing Superman to fall under the influence of the Anti-Life Equation and create the "Knightmare" timeline. Justice League 3 would have followed the Knightmare versions of Batman and the remaining League members as they attempted to rectify his mistake. Due to Flash being able to reach the right point in time to warn him, Batman would have been able to prepare for the attack and sacrificed himself to save Lane. Snyder also claimed his plans were to have Superman and Lois' would have had a child called "Bruce", who would become the next Batman.[1]

These plans were put on hold due to the critical and fan backlash towards Batman v Superman, leading to subsequent intervention for Justice League. They were then abandoned after the commercial failure of the theatrical cut of the film. After successfully getting the "Snyder Cut" for Justice League released, some fans have attempted to restore Snyder's plans for future films.