Will Friedle
Kevin Conroy
Stockard Channing
Cree Summer
Lauren Tom
Batman Beyond, (Also known as Batman of the Future in some regions), is an American animated television series created by The WB Television Network. Beyond is a futuristic continuation of the The New Batman Adventures, which was cancelled in favor of a more youth oriented Batman.

Batman Beyond began airing on January 10, 1999 and ended its run on December 18, 2001 with 52 episodes. A direct-to-video movie, Batman Beyond: Return of the Joker, was released but plans for a second feature and another season were cancelled in favor of a Justice League animated series. There was a short-lived spin-off, The Zeta Project. It is worth noting that in The Zeta Project's first season episode "Shadows", there is a crossover with Batman Beyond; in this continuity, the story takes place between the episode "Countdown" and the series finale "Unmasked."

This series is the chronological end to what is known as the DC animated universe, though the actual end is the Justice League Unlimited episode, "Epilogue."

In the pilot episode, which is set approximately in the year 2019, an aging Batman is having increasing difficulty handling criminals he once subdued with ease. His allies, Alfred Pennyworth, Lucius Fox, James Gordon, Harvey Bullock, Renee Montoya and Leslie Thompkins have passed away of natural causes while his partners, Dick Grayson, Barbara Gordon, Tim Drake, and Selina Kyle are still alive and have grown up and left or had falling outs with Bruce after their retirement from their alter-egos. One night, a heart attack forces Batman to betray a lifelong principle by threatening a criminal with a gun (the same one that murdered his parents), despite already wearing a new, high-tech Batsuit. Subsequently, Bruce Wayne decides to retire the Batman persona, and crime fighting in general, permanently.

The story then fast-forwards twenty years. Gotham City is now a futuristic megalopolis equipped with staggering high rises and hovering/flying vehicles. Bruce Wayne is now a virtual recluse, spending his later years living in bitter isolation with no companion but his guard dog, Ace. It is implied by virtue of his continuing to fight crime long after he should have, and his retaining of the costumes worn by Robin, Nightwing, and Batgirl, that even before he had a heart attack, something horrible transpired that caused Bruce to sever his ties with the Justice League and forbid his disciples from ever again assuming their alter-egos. The events which caused all of this was finally revealed in Batman Beyond: Return of the Joker.

In 2039, Terry McGinnis (born on August 18, 2023) is an athletic sixteen year-old high school student, and reformed troublemaker with a deeply ingrained sense of personal justice. During the pilot episode, he saves a fellow passenger on a commuter rail from being hassled by one of the Jokerz, and later single-handedly takes on an entire gang of them to defend his girlfriend, ultimately resulting in a harrowing high-speed motorcycle chase through Neo-Gotham's expressways. The chase ultimately ends at the doorstep of Wayne Manor, where a fleeing Terry runs into the elderly Bruce Wayne. Bruce and Terry fend off the Jokerz side-by-side, but the exertion aggravates his heart condition. Terry helps Bruce back to the manor, and while staying there, he discovers the entrance to the Batcave, and later returns to "borrow" the Batsuit to avenge the death of his father. As crime and corruption are beginning once again to rear their ugly heads in Gotham, Bruce ultimately allows Terry to assume the mantle of Batman.

Terry continues the battle against crime tutored by Bruce, and aided by a new high-tech Batsuit that augments his abilities, fires Batarangs from the wrists, flies using jets fired from the feet, allows eavesdropping through a hypersensitive touch microphone, and provides camouflage abilities. He comes to have his own rogues gallery, such as the seductive shape-shifter Inque, the hypnotist Spellbinder, the bitter, deaf sound expert Shriek, the deadly assassin Curare, the insane terrorist Mad Stan, the African hunter Stalker, a reincarnation of the Royal Flush Gang, and The Jokerz, a gang idolizing the Joker. However, on occasion, Terry is also forced to face his mentor's old foes, such as the atrophying Mr. Freeze, Bane (elderly, wasted, and dying from his consumption of Venom, the substance that gave him his strength), the immortal Ra's al Ghul, and even a reborn Joker.

Terry's initial greatest foe is Derek Powers, a ruthless billionaire who took over Wayne Industries and was later accidentally mutated into a radioactive monstrosity known as Blight. Powers had Terry's father, Warren McGinnis, murdered after Warren discovered that Powers was in the process of developing a biological weapons program. The first season ended with a showdown between Batman and Blight aboard an abandoned nuclear submarine, where Powers was in hiding after his identity as Blight was revealed to the world by his ambitious son Paxton Powers, who planned to usurp his father as chairman of Wayne-Powers.

Maxine "Max" Gibson (born October 28, 2023) is a seventeen year-old computer genius who discovers Batman's secret identity, and helps Terry with everything from computer hacking, to babysitting, to coming up with excuses for Terry's girlfriend, Dana Tan. Max plays an integral part in Batman's war on crime, essentially as his Alfred.

Terry also finds one other ally, though a begrudging one: Barbara Gordon, the former Batgirl. Having followed in the footsteps of her father, James Gordon, Barbara is now Police Commissioner of Gotham City. In one episode, Barbara reveals to Terry that she and Bruce had once been romantically involved. However, she is unhappy with the idea of a new Batman, especially a teenager, as she is still haunted by the same event that caused Bruce to go into isolation. However, knowing from personal experience that she cannot deter Terry anymore than she could have been deterred from being Batgirl, she relents, possibly also out of respect for her mentor and former lover, the original Batman. Also, passing conversation between Barbara and Bruce suggested that at the time of Batgirl's retirement, the suit had bullet holes in it that had been repaired.

To help carry off the feel of a world 50 years in the future, Batman Beyond employed a group of slang terms either specifically invented or with altered usage.

Justice League Unlimited revisited the world of Batman Beyond twice in 2005. The first time featured Batman, Wonder Woman, and Green Lantern transported 50 years into the future to stop a time-traveling villain with the help of the future Justice League Unlimited, including Terry McGinnis as Batman. The second time occurred during the episode “Epilogue", where the true secret origin of the future Batman is learned in a story meant to be the de facto series finale for this Batman's story.

* Note: The audio commentaries for both the edited and uncut versions of Return of the Joker were provided by the same contributors, however both versions are slightly different from each other.

After an initial 6-issues limited series released in March 1999, Batman Beyond had its own comic book series, running through November 1999 until October 2001, for a total of 24 issues. They were set in the same world of the show and aimed at younger readers.

Originally, Batman Beyond #3 (the monthly series) was to focus on The Terrific Trio from the Batman Beyond episode "Heroes." The story would have 2-D Man and Magma trying to revive their former teammate, Freon. It was rejected due to their resemblance to the Fantastic Four.[4]

In 2010, Batman Beyond: Hush Beyond, was released as a 6 issue series set after the events in Batman Beyond: Return of the Joker. This series was aimed at an older audience that the previous two volumes and resolves the question of what happened to Dick Grayson in the Beyond universe and also focuses on Terry's relationship with Bruce and his role as Batman. Dick left the role of Nightwing and his connections to Bruce behind after a mission with the Joker left Dick severely injured, with long term repercussions of a missing eye and a bullet near his spine, due to a mistake by Bruce. The series continued in 2011 with 8 issues set after the events in Hush Beyond and introduces events in the 2012 continuing series of 10,000 Clowns.

Terry also appeared in Superman Adventures #64. The story has Terry/Batman traveling to the present and teaming up with Superman against a futuristic version of Brainiac.

In Superman/Batman #22 (written by Jeph Loeb), a Batman wearing the Beyond costume appears, making his first foray into the regular DC Comics continuity. The plot involves Bizarro being transported to an alternate version of Gotham City. It would appear from #23 that this Batman is someone named "Tim" (presumably Tim Drake). However, the writers admitted to the mistake of misnaming the character,[citation needed] and although the name was rumored to be changed to "Terry" in the trade paperback, it still reads as "Tim" (see first page of "Smoke and Mirrors" chapter in the trade paperback). Furthermore, the packaging for the action figure created by DC Direct based on this appearance in Superman/Batman also erroneously identifies Batman Beyond as Tim Drake instead of Terry McGinnis. Another oddity is the Batwing pictured is the version from Batman: The Animated Series, not Batman Beyond. Whether this is the regular DC universe or a parallel one is still to be seen. It seems possible that this may be an alternate reality as the same story has Batzarro transported to the world of Superman: Red Son, an Elseworlds communist version of Superman.

A Green Lantern implied to be from a universe within the multiverse similar to that of Batman Beyond (though not the same GL represented in the animated series) is a participant in the Countdown: Arena series leading towards Final Crisis.

One canon contribution of Batman Beyond to the DC Universe is establishing that Barbara Gordon eventually becomes Commissioner of Gotham Police following in her father's footsteps.

Batman Beyond had a spin-off called The Zeta Project, featuring the android Zeta from the Batman Beyond episode "Zeta." Batman would guest star in the episode "Shadows."

The supervillain Stalker was to have appeared in The Zeta Project episode "Taffy Time," but didn't make it. The second season episode "Ro's Gift" has an appearance made by the Brain Trust from the Batman Beyond episode "Mind Games." Terry McGinnis/Batman was originally slated to appear in this episode as well, but was cut since Bruce Timm and company were working on Justice League.[6]

The future Batsuit is available as an alternate costume for Bruce Wayne in Batman: Arkham City and Injustice: Gods Among Us. 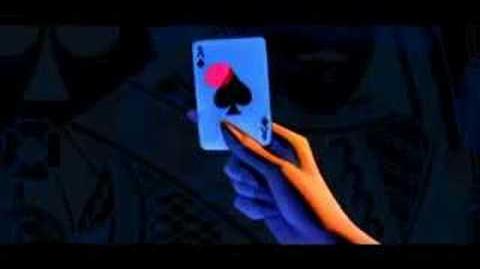 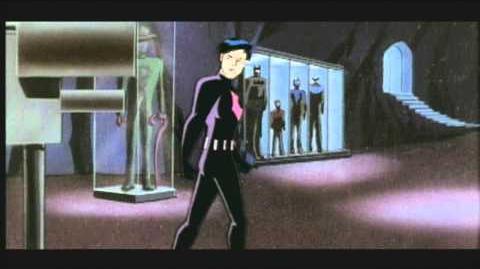 Batman Mech Exosuit and the Batman Beyond Batsuit

Batman Beyond Animated - Civilian Terry Vs The Batsuit

Batman Beyond Damaged Batsuit
Add a photo to this gallery

Retrieved from "https://batman.fandom.com/wiki/Batman_Beyond?oldid=216495"
Community content is available under CC-BY-SA unless otherwise noted.