Batman Beyond: Return of the Joker

Batman Beyond: Return of the Joker

"In the mid 21st century, Bruce Wayne, has retired from crime-fighting and the last known sighting of Batman occured over twenty years ago. But evil never rests in Gotham City. Now a menacing street gang known as the Jokerz terrorises innocent citizens.

But when the Jokerz burgularise several computer operating systems for high-tech components, Wayne suspects someone else is the mastermind behind their schemes.

McGinnis is barely on the case when Wayne is nearly killed by The Joker at a shareholder meeting at Wayne Enterprises.

How could The Joker, the seemingly immortal Clown Prince of Crime, still be alive and stronger than ever? The secret rests in what transpired the night Batman fought The Joker for the last time. Now it's up to you to avenge your mentor before The Joker's last laugh is on you."

As Terry McGinnis, the new Batman, the player could run, punch, kick, glide, use weapons and gadgets, crouch, walk and open doors. There were two modes to choose from, Story Mode or Time Attack.

There were three difficulty settings - Easy, Normal and Hard. The main objective is to get past the Joker's fiendish traps, deadly henchman and Joker members to fight the Clown Prince of Crime himself.

There are four different versions of the Batsuit, which could be used for certain sections of the game, these were as follows:

In this mode the player chose one of the four Batsuits before facing three deadly opponents to try and achieve the fastest time possible.

All four stages were partly based on the movie, but had several differences:

Batman investigates why the Jokerz are stealing from this area while defeating enemies and robots along the way, until facing Bonk.

Bruce Wayne is being held hostage by the Joker, so Terry has to get to the very top of the building to rescue him and face the vicious Woof.

Terry explores the ruins of the old broken down Arkham Asylum of the 20th century to find out information of the Joker's reappearance. Here he has to avoid several clown henchmen and face Ghoul.

A very short level of where Batman has to go through dangerous obstacles and avoid falling into deadly pits.

The Final Stage. Terry must face many of the Joker's Henchmen along with Chucko and Dee-Dee as he tries to find and stop the Clown Prince of Crime himself.

Most people found the PlayStation and N64 versions disappointing for the lack of stages, only having five. There was no way to save progress and no checkpoints which meant if the player died at any stage of the game they had to restart from the beginning of the stage.

The Gameboy version had more mixed reaction because the player could save their progress using a password. 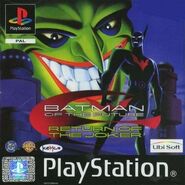 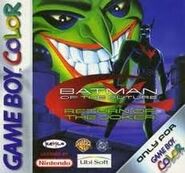 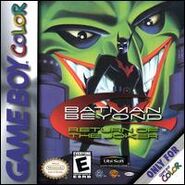 Game Boy USA Version
Add a photo to this gallery
Retrieved from "https://batman.fandom.com/wiki/Batman_Beyond:_Return_of_the_Joker_(Video_Game)?oldid=157355"
Community content is available under CC-BY-SA unless otherwise noted.