"If the Bat wants to play, we'll play!"
―Two-Face (after you select a mode in the game)[src]

Batman Forever is a beat 'em up video game based on the original motion picture. This game used a slogan: "The Real Game Begins."

"A chance remark at Wayne Enterprises leads to madness. Join Batman and Robin as they battle Two-Face and a strange new menace who calls himself The Riddler. With his saucy sidekicks Sugar and Spice, Two-Face has all the ingrediants necessary to make mayhem! You'll see the Dark Knight battle all kinds of monstrous maleviolence. You'll see a night at the circus turn into a free-for-all with Batman in the centre ring! The action takes you from Gotham City subways to the inner recesses of Wayne Manor as you fight one fierce foe after another to ensure that the legend of Batman lives on... forever!"

The player plays as either Batman or Robin. There is also a fighting game mode called "Training mode" where the player can play as Batman, Robin, or any of the enemies found throughout the game against either a computer-controlled opponent, against a second player, or cooperatively against two computer opponents.

The controls are largely based on move lists and key sequences. Some gadget moves involve moving away from the enemy right before pressing a punch or kick button, which creates problems since the game only keeps the players facing enemies if they're close enough to each other.

To use the grappling hook, the SNES version uses the unconventional combination of pressing the Up button slightly after the Select button.

In order to jump down off platforms, you have to slightly push the R button, before you push down on the Super NES version.

The gadget list is selected by the player each level, with three standard gadgets for each character and two gadgets selected from a list. There are also four hidden "blueprint" gadgets.

You will also find riddles along the way to help you in the game if you can solve them.

The Super NES and Genesis/Mega Drive versions of the game present very glaring differences. The two most prominent ones are the constant load screens (where the game will display "HOLD ON") on the Super NES version, and the much more Mortal Kombat-like controls on the Genesis version. The PC version is the same as the SNES and Genesis versions but has superior graphics and Batman & Robin wear different costumes, it also had loading delay.

The game stages differed from each console version but all were based on the storyline of the movie. 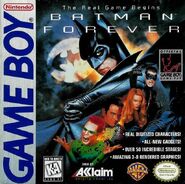 Game Boy
Add a photo to this gallery

There are two kinds of Co-op modes in Batman Forever. Players chose between Batman or Robin. In one mode, Batman and Robin work together and cannot harm each other. In another mode, however, Batman and Robin can attack each other, but still need to look out for enemies. The co-op mode was not available on Game Boy and Game Gear systems.

Most game players found it disappointing depending on what console they used because of the controls being too hard, lack of graphics and the soundtrack not being based on the movie. The fact that the ending was terrible after all the trouble going through the hardness of the game didn't help either. Also, the gameplay to most players felt very similar to Mortal Kombat. To most Batman fans, this was by far one of the most unpopular Batman based games ever.

Retrieved from "https://batman.fandom.com/wiki/Batman_Forever_(video_game)?oldid=210203"
Community content is available under CC-BY-SA unless otherwise noted.