Uniquely, the Batmobile (designed by Lucius Fox) had the ability to transform, on the fly, into "Battle Mode" which gave it the appearance of a battle tank, with a wider wheel base, and higher ground clearance. featuring various weapons and movement capabilities, including a Vulcan Minigun, 60mm Cannon, Missles,non-lethal riot suppressors, full 360 wheel spin and the ability to strafe with built in thrusters. Enemies who touched the Batmobile were knocked out by a charge of electricity. Other features included an EMP to stun hostile drones and knock missiles out of the air, a Drone Virus; a device that allowed drones to be hacked and turned against each other, and a Power Winch, to pull down walls, or to allow the Batmobile to act as a counter weight. In that mode, the Batmobile could not travel at its top speed. However, it gained the ability to move sideways and diagonally indefinitely, which gave it full maneuverability and control to firefights. The headlights all turned red in that mode.

The Batmobile's momentum could be transferred to Batman, by accelerating, and then ejecting, which allowed Batman to gain speed and height to his glide, and allowed for faster traversal, of the entire city, not just the streets. The Batmobile could be used in conjunction with the Batwing, and presumably allowed for quick transfer from one cockpit to another.

Batman, in a sense, was not the only person to use the Batmobile. At the end of the campaign, where Scarecrow drugs, the now unmasked, Batman, Joker uses his own variant of the car named the jokermobile. This skin for the weaponized Batmobile, named Jokermobile, can be found in the showcase but unfortunately, cannot be used in any AR challenge maps or in the main campaign, even after completing the game 100%.

Rocksteady's take on the Batmobile, appeared somewhat similar to Christopher Nolan's Tumbler and new DCRU batmobile at the time, due to its heavily armored exterior, easily capable to withstanding automatic fire from an assault rifle, and a grenade launcher blast, with no ill effect on its performance. Despite that, it was much sleeker than the Tumbler. The Batmobile featured a central single man cockpit, as opposed to the traditional, two seater coupé design that the Batmobile typically adhered to. However, the Batmobile featured room to transport two passengers, within a sealed compartment in the back. It could also strafe short distances, and avoid enemy attacks. It's also fast enough to be able to drive on walls and on ceilings. Each wheel had an independent suspension and turn, which gave the Batmobile a zero turning radius. The car could turn its wheels 90° and crab steer (drive sideways). 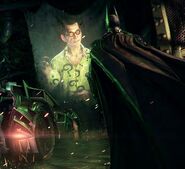 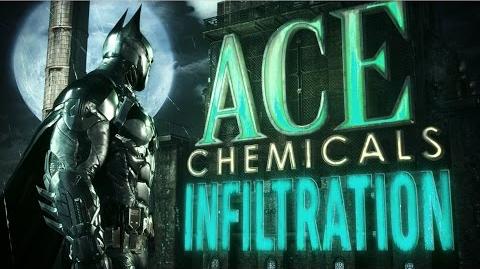 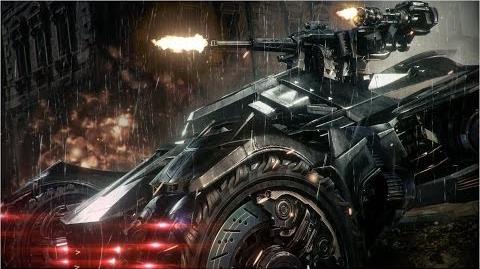