Batman
Batman: The Movie
Batman: Return of the Caped Crusaders
Batman vs. Two-Face

The Batmobile from the 1966–1968 live action television show and its film adaptation began life as a Ford concept car called the Lincoln Futura, built over a decade earlier in 1955. The body of the Futura was fabricated by Ghia of Italy, whose artisans hammered the car's panels over logs and tree stumps carved as forms to create the sleek manta ray-like car. In 1959, the Futura was featured sporting a fresh red paint job in the film It Started With A Kiss, starring Debbie Reynolds and Glenn Ford. In 1965, ABC-TV chose famed Hollywood customizer George Barris to design a "Batmobile" for their soon-to-go-into-production Batman show. Dean Jeffries worked on the design and initial fabrication for the Batmobile, using a 1959 Cadillac, but when the studio wanted the car faster than he could provide, he turned it back to George Barris. With only three weeks to finish, Barris decided that rather than build a car from scratch, it would be best to transform the Lincoln Futura (bought from Ford for $1.00) into the famous crime fighting vehicle of TV's caped crusader. Barris hired Bill Cushenberry to do the metal modifications to the car. When filming for the series began, several problems arose due to the age of the car: it overheated, the battery went dead, and the expensive Mickey Thompson tires kept blowing. By mid season, the engine and transmission were replaced with a Ford Galaxie. The most frequent visual influence of this car is that later Batmobiles usually have a rear rocket thruster that usually fires as the car makes a fast start.

The extra-large bat-trunk in the Batmobile holds various crime-fighting equipment and has plenty of space to fit eight people comfortably. The windshield is bulletproof. And of course, the Batmobile is not without its helpful gadgets:

This Batmobile original gadgets included the nose-mounted chain slicer, lasers, rockets, an on-board telephone, radar, dash monitor, on-board computer, and police beacon. If needed, the Batmobile is capable of a quick 180° "bat-turn" thanks to two rear-mounted 10' parachutes, and it is equipped with a smoke emitter and a nail spreader to discourage pursuit. Some changes were made during the run of the series, including different license plates, a change in steering wheel, and the addition of extra gadgets such as the rear-facing camera and battering ram.

Tim Burton in the Batmobile on the set of Batman Returns. 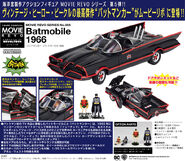