"You're just jealous, because I'm a genuine freak and you have to wear a mask!"
―The Penguin[src]

The second Batsuit was more armor-plated in appearance. It seemed somewhat more mass-produced than its predecessor, as Bruce Wayne had a walk-in vault to select and assemble from multiple suit-pieces that were present. 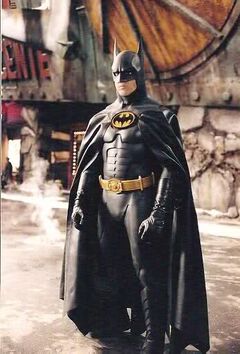 At some point after the 200th Anniversary Parade, the Batsuit was updated to a more angular armor plated version, with more industrialized seam lines that were shown rather than being hidden at joints or at the back like the previous sculpted muscle look, most notably down the center of the thighs. This new armor was shown to possess weak points, particularly in the pectoral seam or his lower sides, as demonstrated by Catwoman when she jabbed her claws into such a spot on two encounters.

However, the Batsuit still retained its defense against bullets, although, again, the impact of the bullets still knocked the wearer off their feet. It did not appear to leave bullet marks as easily the original torso after it took hits. A notable improvement allowed the cape to transform into a glider.

The same utility belt was still in use for the second Batsuit. The belt still had a small motor that was used for shifting equipment from the rear of the belt to the front. A handful of gadgets were typically stored on the back.

The "spring-action reel and line" was a multipurpose gadget that had integral functionally with the utility belt. The compact pieces slid from the back of the belt and were assembled by Batman. It had various attachments:

There was also a separate large horizontal zip-line (known as "The Gauntlet") that fired two lines that formed a path across a distance. Batman later took to using a small version of this item. The original device was so big that there was no way it could be stored on Batman's person.

A powerful new self-guided, computerized Batrang was used by Batman to dispatch several Red Triangle Henchmen. After it neutralized nearly all of its targets, it was snatched by the Ratty Poodle and used in the plot to frame Batman by the Penguin.

A key new of feature of this Batsuit was the cape's ability to transform into hang-glider wings.

Bob Ringwood created rough illustrations for the second costume, going back to their original concept of armor plating.

Retrieved from "https://batman.fandom.com/wiki/Batsuit_(Batman_Returns)?oldid=212256"
Community content is available under CC-BY-SA unless otherwise noted.