Batwing is a representative of Batman Incorporated from the city of Tinasha, within the Democratic Republic of Congo. Batwing, The Batman of Africa was created by writer Grant Morrison and first depicted by artist Yanick Paquette. He first appeared in the fifth issue of Batman, Incorporated. According to fellow Batman, Incorporated artist, Chris Burnham told iFanboy that he designed the character first, while Paquette was the first to draw him in interiors. In line with Morrison's use of obscure continuity throughout his Batman stories, the character seems to be based visually on a minor character which appeared in Batman #250 in a story called "The Batman Nobody Knows". In this story, a young African-American boy tells his friends how he imagines Batman to be, and gives him the name "Batwings".

When David Zavimbe was a young boy in Tinasha, a fictional city within the Democratic Republic of Congo, his parents died of HIV/AIDS very early in his life. Following the death of his parents, he was drafted as a boy soldier, like many children his age, into a war that ravaged his country. David was able to escape the life of being a soldier at such a young age, and soon became a police officer in Tinasha, where despite corruption running rampant, he remained dedicated to the law and justice. Elsewhere in the United States, Bruce Wayne announces Batman Incorporated, an initiative to put Batman like figures in countries all across the world.

Soon after that, Batman pays a visit to Tinasha, where he inducts David as the newest member of his team in his quest to stop the global terrorists, Leviathan. Shortly after finding the false Dr. Dedalus and coming into confrontation with Leviathan yet again, Batman travels to an unknown destination within the continent of Africa to recruit a new member to his team of Batmen, Batman Incorporated. Batman leads David through his first mission for Batman Incorporated, providing a technologically advanced bat-suit. David comes into contact with a Leviathan brain-washing cell, narrowly avoiding escape once his presence is compromised. During his escape, he demonstrated a knowledge of martial arts, also showing off special capabilities of his bat-suit including jet propulsion.

Batwing faces off against a new villain calling himself Massacre. As Massacre gets the upper hand in battle against Batwing we see a flashback of Batwing stopping Blood Tiger, a former captain of a warlord and now in control of a drug ring. With the help of Batman he manages to capture him.

As he further investigates he comes upon a gruesome crime scene with beheaded bodies. Later on as he researches it with the police he finds a room filled with murdered police officers and he gets stabbed in the back by Massacre as he looks shocked at the murdered officers.

Batwing has shown a knowledge of martial arts and is supplied by Batman with a variety of gadgets and tech to help him fight crime and corruption. His batsuit is armored and is capable of flight with the help of wings. Because he works as a police officer it is implied that he received basic police training. 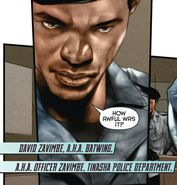 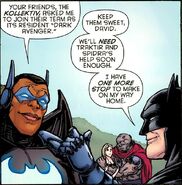 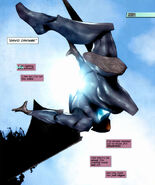 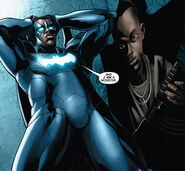 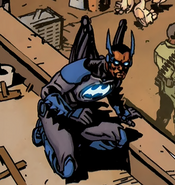 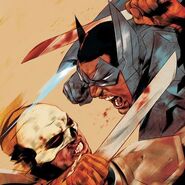 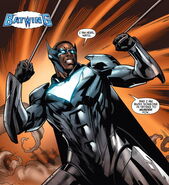 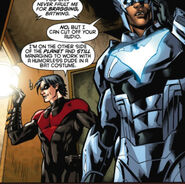 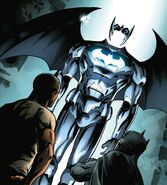