Yvonne Strahovski (voice)
Ruby Rose
Wallis Day
Tara Strong (voice)
Stephanie Beartriz (voice)
Katherine "Kate" Kane is the second Batwoman. Debuting in 52 #11, she is a member of the Kane family and, through her father, the cousin of Bruce Wayne. Batwoman has headlined her own comic series since 2011 and served as a vital member of the Batman Family.

Katherine Kane came into the world about two minutes after of a identical twin sister named Elizabeth, to her parents Jacob and Gabi Kane, the murder of her mother and sister was the trigger that made her seek justice and later turn into a Batwoman.

Renee Montoya's former lover and heiress to one of the (formerly) wealthiest families in Gotham City, owning that which Bruce Wayne's family did not. Renee refers to her as "Katherine the younger" and asks Kate to help find the connection between the Kanes and the address 520 Kane Street. While still upset from their breakup, Kate agrees to help Renee, but punches her after Renee mentions their prior relationship. Renee suggests they once loved each other, and Kate tells her to leave. Not long after that, Batwoman is shown to be observing Montoya from the rooftops as Renee converses with the Question (in his guise as "Charlie") in an alley.

Kate meets with Renée and Charlie in Gotham Park and confirms that the warehouse was being leased by Ridge-Ferrick until six weeks ago. Renee refuses to tell Kate what's going on saying that she doesn't owe Kate anything, which shocks Kate and prompts her to tail them as Batwoman. When Renee and the Question break into Ridge-Ferrick's Gotham offices, they are attacked by Whisper A'Daire's shapeshifting minions, and Batwoman arrives to rescue them. Making quick work of two monsters, Batwoman stops Renee from shooting the third, instead kicking the monster out a window. Batwoman informs them the police are coming, asks that she not be mentioned, and leaves.

After Renee learns that the Book of Crime, a sacred text of Intergang, contains a prophecy foretelling the brutal murder of the "twice named daughter of Kane," she and the Question return to Gotham. They contact Kate by flashing a Bat-Signal, and the three join forces to avert Intergang's plans. As Kate continues the case, she is joined by Nightwing, who has recently returned to Gotham and becomes infatuated with her. On Christmas Eve, he gives her an 'official' Batarang. She also celebrates Hanukkah with Renee, and the two kiss shortly before Christmas.

Intergang realizes that the image of Batwoman in the Crime Bible and the cited "twice-named daughter of Cain" were one and the same, and ransack Kate's apartment, she is kidnapped by Whisper A'Daire and her bodyguard Kyle Abbot with the intention to sacrifice her. Renee finds her, seemingly too late to save her, as during the fight, Kate pulls a knife out of her own chest to stab Bruno Mannheim and then collapses in Renee's arms. Kate survives her wounds after Renee stops the bleeding in time, however, and as she recuperates in her Penthouse, Renée, dressed as the Question, shines the batsignal into her apartment and asks "Are you ready?"

One year after the start of 52, the Penguin suggests Batman bring a date to the opening of his club, asking, "Why don't you bring that new Batwoman? I hear she's kind of hot."

Batwoman has most recently appeared in Countdown 39. She appears after Renee Montoya confronts Trickster and Pied Piper, having trailed them from Penguin's Iceberg Lounge nightclub.

Following the events of Final Crisis and Battle for the Cowl, in which Bruce Wayne has supposedly died and is replaced by Dick Grayson, Kate becomes the lead of Detective Comics from issue 854 onwards. She's seen investigating the arrival of a new leader of the Religion of Crime to Gotham. She briefly meets the new Batman to discuss her findings. Kate demonstrates greater knowledge of the Religion of Crime, and even corrects Batman by saying there's 13 and not 12 covens of the religion in Gotham. Grayson eventually concedes the case to her.

Aspects of her personal life are also revealed, including her relationship with her ex-colonel father; serving as Batwoman's ally, whom she addresses as "sir." A past traumatic incident is alluded to which she claims still haunts her. As she vaguely describes the experience, her face is shown superimposed on the page over a restrained girl with a bag over her head. She later tracks down the new leader of the Religion of Crime: an elaborately costumed woman named Alice. Over the course of the conflict that ensues, Batwoman observes that Alice only speaks in quotations from Lewis Carroll; believing herself to be Alice Liddell. Alice denies a connection to the Mad Hatter.

While attending a party thrown for the Gotham Police Department, Kate meets with detective Maggie Sawyer, and runs into her own cousin, Bette Kane (better known as the Teen Titans member Flamebird). Kate is apparently unaware of her cousin's vigilante activities, and inadvertently hurts her feelings when she cuts her off in the middle of a conversation to answer her cell phone. While dancing with Maggie, Kate discovers that Alice has kidnapped her father and plans to destroy Gotham by spreading a deadly airborne chemical from a hijacked airplane, thus succeeding where Mannheim failed. Batwoman boards the plane and defeats Alice's subordinates, eventually stopping the plot and rescuing her father in the process. However, Alice is accidentally thrown from the plane, only to be caught by Batwoman. Alice then shocks her by saying that Batwoman has "Our father's eyes," apparently revealing that she is in fact Kate's sister Beth (who was believed to have been killed years ago). With Batwoman stunned by the revelation, Alice stabs her in the wrist with a knife. Batwoman is forced to release her grip, sending Alice to her apparent demise in the river below.

In the aftermath of this discovery, Kate locks herself in her crime lab and tries to come to terms with what just happened, while the police struggle in vain to find any sign of Alice's corpse. These scenes are depicted amongst numerous flashback sequences that comprise most of the issue. Throughout them, back story is provided from her childhood that depicts Kate, her twin sister Beth, and their mother being kidnapped. While Kate's father is able to rescue her, it appears as though both her sister and mother have been killed by the time he arrives.

In her civilian identity as a socialite, she is acquainted with Bruce Wayne and is friends with a doctor named Mallory, who treats the Question's cancer and later Kate's stab wound. Kate is also Jewish, and celebrated Hanukkah with Renee. Kate has been referred to as "Katherine the Younger," implying a mother of the same name. It is unknown if this is the original Batwoman, Kathy Kane, as Kate also has a stepmother named Catherine. Her father, Col. Kane, is a military man who is aware of her double life and has provided her with training and equipment. Kate has been confirmed as a cousin of Bette Kane (Flamebird). It has also been implied that the villain Alice, leader of the Religion of Crime, is possibly Kate's sister.

When the Justice League of America splits up following Bruce Wayne's seeming death and a disastrous confrontation with the Shadow Cabinet, Green Lantern Hal Jordan leads a group of superheroes to Gotham in order to track down the supervillain known as Prometheus. Kate is shown stalking the heroes from the rooftops after they encounter Clayface III.

Batwoman later contacts both Leagues at the JLA Watchtower, informing them she encountered and engaged supervillain Delores Winters, who mysteriously collapsed and died right as she was about to be taken into custody. The heroes request that Kate bring the body up to them, but she declines, telling them that she is much too busy due to a rash of criminal uprisings going on in Gotham. The hero Firestorm is then sent to retrieve the corpse from Kate and bring it to the team, who discover that Dolores was forced into fighting by means of a mind control device.

In a text piece included in Justice League: Cry for Justice #6, writer James Robinson revealed that Batwoman was initially intended to be part of his new Justice League line-up, but this plan fell apart after Cry For Justice was shortened into a mini-series rather than an on-going title. This explains why Batwoman is present on the cover of the first issue, and why she was initially said to be a member of the team when the book was first announced.

Later, Batwoman is kidnapped by cultists and taken to London in order for her to once again be sacrificed. She is sealed within a coffin and taken underground to the last remaining Lazarus Pit in order for the ritual to begin. She is saved by the timely intervention of Dick Grayson and the British superheroes, Knight and Squire. After learning that Grayson plans on placing Bruce Wayne's corpse into the pit in order to revive him, Kate strongly protests, but he simply ignores her. True to Kate's warnings, Bruce (in reality an insane clone created by Darkseid) emerges from the Pit and attacks the heroes. As the battle takes place, the cultists who kidnapped Kate detonate explosives surrounding the Pit, causing a massive cave-in. Grayson discovers Kate, buried alive and with extensive injury to her spine and legs, and tries to help her. Kate is ultimately healed after being placed inside the Pit, and ultimately returns to Gotham with the others. Before leaving to return to her home, Grayson attempts to flirt with Kate by telling her that he has a thing for red-haired crimefighters (a reference to his previous love interests, Barbara Gordon and Starfire).

As Batwoman, Kate lacks any superpowers, and instead relies on her martial artistry and Batman-inspired equipment when fighting crime.

Skilled Martial Artist: In the ten years since her breakup with Renée Montoya, she has learned to fight and is able to defeat three monsters, as well as spy on Renee and the Question with relative ease.

Heiress: Being the heiress of a family whose fortune is comparable to the Waynes, Kate possesses the finances to produce an arsenal of equipment, similar to Batman. This includes a baton-like device which can extend from the center in length and has Bat-shaped attachments at each end.

Athletic level: Kathy Kane possesses the strength level of a woman her age, size and weight who engages in intensive regular exercise. 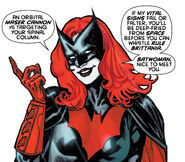 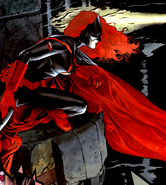 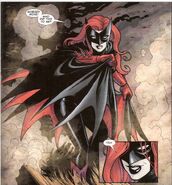 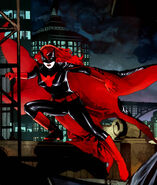 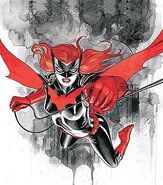 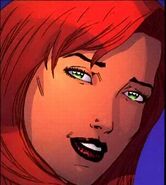 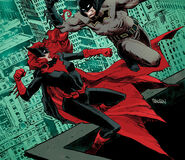 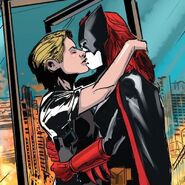 Batwoman made her live action debut in the Arrowverse crossover Elsewords, played by Ruby Rose. The character also received her own spinoff series with her. After Rose left after the first season, Wallis Day took over the role as Kane midway through the second season.

In the Golden Age and Silver Age, there was also a Kathy Kane who also became Batwoman. Unlike those histories, this Kathy Kane is not the elder aunt to the first Bat-girl, Betty Kane, who has become now known as Flamebird.

Unlike the Silver Age Kathy Kane, who was written as being romantically attracted to Batman, the new version of Kane is written as a "lipstick lesbian." Her homosexuality was announced at the same time as the character was revealed in the spring of 2006. Stories appeared on television news outlets such as CNN, general news magazines such as "USA Today", and gay culture magazines such as Out. Renée Montoya, Kane's former lover, hinted during 52 that her inhibitions were the reason behind their break-up.

In 2007, DC Direct released a Batwoman action figure as part of their 52 series line.