Alyson Stoner (voice)
Mary Elizabeth "Bette" Kane was the original Bat-Girl in publication and later was reintroduced under the names of Flamebird and Hawkfire.

Batwoman and Bat-Girl were created to be romantic interests for Batman and Robin, respectively, as well as wannabe crime-fighting associates. Bat-Girl wore a red-and-green costume to "flatter" Robin. Bat-Girl appeared seven times between 1961 and 1964, but then disappeared in 1964 (along with Batwoman, Ace the Bat-Hound, and Bat-Mite) when new Batman editor Julius Schwartz decided she and other characters were too silly. It has been suggested by scholars that the characters of Batwoman (in 1956) and Bat-Girl (in 1961) were introduced in part to refute allegations of homosexuality in Batman comics; specifically, the enduring claim that Batman and Robin were homosexuals.

Given the time period in which Bat-Girl and Batwoman were introduced, it is safe to conclude that these versions were part of Earth-Two continuity (indeed, an Earth-Two Batwoman was confirmed in The Brave and the Bold #182). When Batwoman and Bat-Girl were later revived in the 1970s, these versions were considered to be part of Earth-One continuity. Bat-Girl became a member of the Teen Titans West. However, she only appeared four times in this era.

In the Post-Crisis DC Universe, the character known as Batwoman was erased from existence (although her alter ego, Kathy Kane, is still murdered as Batwoman was); Batwoman's niece, Betty Kane, disappeared as well. Unlike her aunt, Betty's removal from history would not last long.

For a brief moment in the 1970s, Betty had joined the west coast version of the Teen Titans under her Bat-Girl moniker. Though 'Bat-Girl' did not exist, her team did; therefore, a new version of the character was necessary. In Secret Origins Annual #3 (1989), the official post-crisis history of Titans West was revealed. Instead of Betty Kane's Bat-Girl, fans were introduced to a similar character: Mary Elizabeth "Bette" Kane, aka Flamebird.

Bette was now a very driven and somewhat spoiled Los Angeles debutante who achieved professional-level proficiency at tennis at an early age. After witnessing the dashing young Robin on the news, Bette vowed that she would gain his attention and favor by becoming a masked adventurer herself. Training to Olympic-levels in gymnastics and some martial arts, she created the identity of Flamebird (and a costume that resembled her Pre-Crisis Bat-Girl identity) and joined Titans West in hopes of catching Robin's eye. While flattered, the driven young hero was not sure how to deal with her obsession and avoided her, much to her dismay.

Betty (now "Bette") Kane becomes Flamebird, and teams up with her idol Dick Grayson. After briefly giving up her heroic persona, Bette found that neither winning tennis tournaments nor achieving perfect grades in school matched the rooftop thrills of the hero biz. She attempted several times to reunite the Titans West team, most notably after a journey into the afterlife with Hawk and Dove II, but was unsuccessful. Dove II (always perceptive about such things) noted that Bette was essentially a very lonely person, basically desperate for company and contact with others. Bette again gave up her obsession with the Titans until malfunctioning former Titan Victor Stone collected her, along with all former Titans everywhere, in an attempt to protect his soul from the Justice League. Hoping this would lead to a formal invitation to rejoin the team, Bette was crushed to learn they did not need (or want) her assistance.

A short time later, Gar "Beast Boy" Logan found himself alone in Los Angeles after the team neglected to ask him back. Landing himself in a bit of trouble by an impostor framing him for various crimes, Gar asked former teammate Bette for help. Having been recently chastised for her dedication (or lack thereof) to crime-fighting by Robin (now in his adult Nightwing identity), Flamebird seized the opportunity to better herself and her reputation, becoming more level-headed and boosting her crime-fighting arsenal. However, the design of her outfit as an adult has similarities to that of Dick Graysons's current Nightwing outfit, with a red tunic and gold V running across the chest.

After Bette helped Gar clear his name, his cousin Matt attempted one last recruitment drive for Titans West (dubbing the ill-fated team Titans L.A.). None of the recruits took the event seriously except for insane and uninvited former Titan Duela Dent, who crashed the party and was subdued by Bette. Content to remain a heroine on her own, Bette was unheard from until she was captured by a Brainiac-worshipping cult leader in Oregon and eventually rescued by Oracle's covert team of female operatives in Birds of Prey. She fought Doctor Light alongside the majority of heroes who had once been members of the Teen Titans.

Flamebird appeared again in Infinite Crisis #4 to fight Superboy-Prime. In this storyline, it was indicated that Flamebird had originally been the Earth-Two counterpart to Bat-Girl, and that after the Crisis on Infinite Earths, Flamebird had replaced Bat-Girl on the sole remaining Earth. In issue 4 of Infinite Crisis, Flamebird, along with most of the Justice Society, disappeared when Earth-Two was reborn.

In the Villains United special, Flamebird (and the other heroes who vanished to Earth-Two) had made it back to "New Earth" at some point after Infinite Crisis #6. She was among the many heroes gathered to fight off the invasion of Metropolis by the Society. Teen Titans #38 reveals that Flamebird briefly served on the Titans during the year-long gap.

In Detective Comics #856, Bette moves to Gotham City to enroll in Gotham University. She encounters her cousin, the current Batwoman at a party thrown for the Gotham City Police Department, and attempts to chat her up, only to be blown off. According to Kate's father, Bette looks up to her and likes spending time with her. In Detective Comics #862, Bette is seen hunched over on her bed, staring at her Flamebird costume and asking Kate how to "let go of the past." Bette is kidnapped by a crazed serial killer known as the Cutter, and awakens bound and gagged in his workshop. The Cutter plans on removing Bette's ears as part of a plan to create a perfect woman through the use of stolen body parts. Batwoman rescues Bette from the killer, and accidently reveals her identity. At the end of the story, Bette is seen in her Flamebird outfit, telling Kate that she wants to become her new partner.

In part two of Neil Gaiman's "Whatever Happened to the Caped Crusader?" Bette is seen in her Silver Age Bat-Girl costume describing an apparent death of Batman. He was holding a bomb that would destroy Gotham if he released its switch, or if the timer ran down. Batman then throws himself into the Gotham river with the bomb to prevent the explosion from causing any damage.

Kate has finally agreed to take Bette on as her apprentice, and has began to give her proper training. Kate still dissaproves and burns Bette's Flamebird costume, only to relent when Bette still goes out to fight crime. Bette has a new high tech costume that seems to have actual pyrotechnic accents, Bette has been recently trying to help Kate reconcile with her uncle, Kate's father.

In the alternate future storyline Titans Tomorrow, it was revealed that after her death at the hands of Duela Dent, Robin used the Lazarus pit to resurrect Flamebird, who assumed the alias of Batwoman and became his partner. But when he and the other Teen Titans (Superboy, Wonder Girl, Beast Boy, Raven, and Aquagirl) began to take over the Western United States, Batwoman formed a Titans East with the Titans who opposed their rule (Cyborg, Terra, Bumblebee, and Captain Marvel Jr.) and helped the Titans' past incarnations defeat the dark adult counterparts. After Infinite Crisis, the Titans Tomorrow timeline was altered by the deaths of Superboy and Bart Allen, with Duela Dent also being killed during Countdown. As such, in the Titans Tomorrow... Today! storyline, Bette remains Flamebird in the future, with Cassandra Cain being Batwoman.

Flamebird is an exceptional athlete, trained for strength and endurance. She has also trained in several forms of martial arts, with kick-boxing as her specialty.

Like Robin, Flamebird has a utility belt containing the following: grappling hook with line, gas grenades, gas mask, flares, flashlight, radio/transmitter, handcuffs, bird-shaped throwing blades (Bird-A-Rangs), and an emergency medical kit. She increased her arsenal by equipping her mask with lenses capable of emitting powerful bursts of blinding light, and created bird-like bolas that can electrocute anyone tangled in them.

The future Batwoman presumably had all these abilities and paraphernalia; in addition, her cape was shown to attach to her costume's gloves and boots and serve as a short-range parachute/glider, much like Batman's cape from Batman Begins. 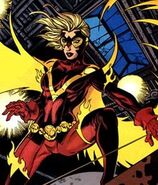 Bette's costume during the interim when Kate burned her Flamebird suit.

Bette is an olympic level athlete. 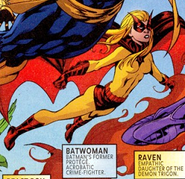 In the Titans Tomorrow Alternate Reality, Bette succeeded her aunt Kathy as Batwoman. 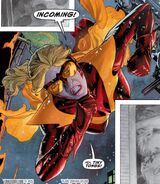 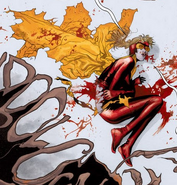 Bette injured in the line of duty.

Bette makes a few small cameos in Young Justice . first in the episode "Home Front" where she is assigned as a liaison for Artemis, at her new school, Gotham Academy, which is also attended by Dick Grayson and Barbara Gordon. She has another cameo with Barbara and Alfred in the episode "Failsafe" listening to Dick Grayson's speech about freedom. She is later seen in issue #20 of the tie-in comic, coming out of Dick's bedroom presumably after sleeping with him, the night before his nineteenth birthday. She apparently did not recognize him from their school days, and did not know his name. She is later seen in flashback scenes, where she attends Dick's fourteenth birthday party with Artemis.