Bill was a security officer on Arkham Island.

a security guard at Arkham Island, one of the many present during the Joker's takeover of the asylum. Little is known of his past or career, except that he was an acquaintance of Eddie Burlow and survived a brutal attack by serial killer and Arkham inmate Victor Zsasz.

After Victor Zsasz's personal therapist Sarah Cassidy left Arkham to get away from her murderous patient, she was replaced by Dr. Gretchen Whistler. Zsasz had a fixation on Cassidy and had already marked her as his next victim. His obsession led to unsatisfactory sessions with Dr. Whistler. Due to heightened concerns over Zsasz's deteriorating mental state, Arkham administrator Quincy Sharp insisted that Whistler could not be left alone with him. Bill and two other guards were present for their therapy sessions.

Zsasz remained increasingly unresponsive during Whistler's interviews. Following one particularly unproductive exchange, Bill attempted to return Zsasz to his cell, but the latter revealed he had a knife and began stabbing him. Zsasz was placed in solitary confinement for a week following the attack. At some undisclosed point, Bill return to his duties at Arkham. The extent of his injuries from his encounter with Zsasz remains unknown.

Bill was present as part of Arkham Asylum's swollen security detail when the Joker was recaptured and returned to the institution by Batman. Like most of the other security personnel, he was assigned an extra shift in the asylum Intensive Treatment Center due to the Joker's return and Killer Croc's simultaneous transfer.

Bill is first mentioned by Eddie Burlow, who attempts to contact him on his radio to report the Joker's escape and a mass breakout engineered at the Intensive Treatment Center by Harley Quinn. The number of guards in the building was greatly reduced after the Joker sent out a fake radio message on all channels ordering them to report en masse to Arkham East; presumably, Bill was among these - he subsequently took up another post in the Arkham Mansion. This allowed the rampaging inmates to take control of Intensive Treatment, overpower the remaining staff, and get their hands on the weapons stored there.

Unknown to Batman, the Joker had allowed himself to be returned to Arkham so he could steal the research of the asylum's head of research, Penelope Young. Dr. Young was modifying the steroid drug Venom drained from the villain Bane to create a stronger formula known as Titan. Young's trials, carried out under the pretense of isolating a miracle cure for psychosis, were secretly financed by the Joker through a front corporation. However, when she learned he was involved, she stopped the trials, compelling the supervillain to seize control of Arkham, locate the formula, and perfect it himself. As the asylum entered a state of armed siege, Young was the primary target of the Joker's thugs. She was initially captured and held hostage in the Arkham Medical Facility before being rescued by Batman. Armed with the knowledge that the Joker would no doubt go after the Titan formula, Young later went to her office in the Arkham Mansion escorted by senior guard Aaron Cash to retrieve her research notes.

Shortly afterwards, the Joker's gang stormed the mansion, intent on recapturing Young. Cash initially told Young to hide in her office, but aware that this was the first place the Joker would search for her, she took her notes and fled to the library in the mansion's south wing with an army of thugs on her heels. Young fled to the library's lowermost level and floor into the room where Bill was at his post with an unidentified asylum orderly. She managed to hide her notes as the escaped inmates broke in after her. Bill attempted to fight back, but the inmates were too numerous and he was lacking in backup or a weapon. Dr. Young was taken prisoner, while Bill was beaten unconscious. He and the orderly were left tied to a mysterious purple present which they assumed was a bomb or a canister filled with Joker Toxin. They were left in the library, as the Joker seemed to have viewed them as irrelevant. Six inmates remained to guard them and search for Young's missing notes.

Once he realized the Joker's real motives, Batman hurried to the mansion, equally determined to locate Young's research. After defeating the inmates in the library, he was informed by the Joker that all he had to do "was stroll downstairs and save [some] helpless hostages". The latter then activated an electrified barrier which prevented Batman from reaching the captives, mocking him. He then introduced his latest game: "Oh! How frustrating. Thought it was going to be easy, didn't you? Has tonight taught you nothing? In two minutes the room will fill with Happy Gas [Joker Toxin]. The audience will be in fits of ecstasy. And then die!!" Throughout the countdown, the Joker continued taunting Batman as he struggled to find another way to reach both hostages in time. Bill and the orderly kicked furiously and struggled against their bonds, to no avail.

Batman was finally able to break into the library's lower floor by destroying a chandelier, which crashed through the glass floor of the second level and into the room. He then entered through the opening, prepared to disarm the bomb; however, the large purple present only contained a ridiculously large boxing glove on a spring and dozens of joker playing cards. As the package sprang open, it released Bill and the orderly from their bonds. They informed Batman of Dr. Young's capture, which was the last thing Bill could recall: "I'm sorry. When I came to, we were all tied up. Doc Young was gone!" As the Joker boasted he was using Zsasz to interrogate Young, Bill also mentioned that he'd heard a voice on his radio requesting somebody meet at the warden's office, alerting Batman to Zsasz's whereabouts. Batman stopped Zsasz though Young was killed by a booby trap. The Dark Knight left the mansion to rescue the warden, who was being held in the island's cell block, while Bill remained with the orderly in the library. Batman has the option of returning later and informing them of Young's death; he also advises them to stay where they are.

He and the unidentified orderly both survived the chaos and returned to their normal duties following the Joker's defeat.

The following is the dialogue for audio recordings of Zsasz's therapy sessions for which Bill was present: 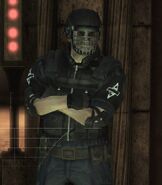 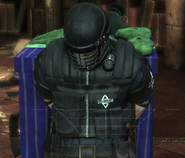 Add a photo to this gallery
Retrieved from "https://batman.fandom.com/wiki/Bill_(Guard)?oldid=214568"
Community content is available under CC-BY-SA unless otherwise noted.