The Batman
Black Mask is a recurring villain in the show The Batman.

Black Mask first appears in the show as a powerful and mysterious crime boss. He controls a gang, which will capture Batman after sending their boss in jail. While Batgirl and Robin wonder where Bruce is, Black Mask's gang assault the police station to free their boss. It's up to the duo to stop them, which they eventually do

He is later another criminal who is captured by Rumor along with other Gotham's criminals. Once free he tries to kill Batman but gets frozen by Mr Freese by mistake.

In season 5, he is hired to capture Lois Lane to attract Superman by Lex Luthor, along with Bane, Mr. Freeze and Clayface II. In another episode, he makes an alliance with a criminal called Shadow Thief to steal an entire building. Batman, Robin and Hawkman eventually stop them and put them in Arkham once for all.

He has some differences from the comics and other TV series. While his origins remain unrevealed, his mask cannot be removed, so it is impossible to know if he's Roman Sionis, Black Mask's real identity. He always have an important member of his gang, called Number One. Two of them have been killed. He also appears in The Batman Strikes!, in 2 issues. 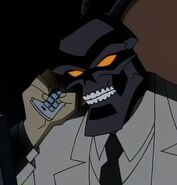