Batman Wiki
Register
Don't have an account?
Sign In
Advertisement
in: Batman Beyond Villains, Villains, Elseworlds Characters,
and 7 more

"And behold I shall be a blight upon the land and everything I touch shall wither and die."
―Derek Powers[src]

Derek Powers AKA Blight is a major enemy of Terry McGinnis' Batman in the distant future of Batman Beyond. He was the evil CEO of Powers Tech who got exposed to a mutagen of his own design by Batman which transformed him into a monstrous meta-human.

Derek Powers is a corrupt businessman who managed to gain control over Wayne Enterprises (now called Wayne-Powers following it's merger with Powers Tech) due to an elderly Bruce Wayne's poor health and arch-rival of new Batman, Terry McGinnis. When Powers develops a lethal mutagenic nerve gas and intends to sell it as a weapon, one of his employees, Warren McGinnis, discovers evidence of the gas, and Powers has him murdered, causing the vengeful son Terry McGinnis to become Batman, who stops Powers' plans and exposes him to the gas; Powers is subjected to extreme radiation exposure to save his life, but as a side effect, his entire body becomes radioactive, rendering him translucent. He is able to hide his state and contain his radiation with a special cosmetic skin that, over time, flakes off. The cosmetic skin begins to last less as his temper becomes more and more uncontrolled and his radiation levels keep rising. He first introduces himself as Blight when he attacks Mr. Freeze. A scientist working for Powers had the idea that by using Powers baseline DNA, she could create a new body for him unaffected by his condition, then transfer him into the new body. To test this procedure, Mr. Freeze was used as, like Powers, his DNA had been corrupted by a condition. At first the procedure seemed like a success, until his condition started to resurface. Powers believed a biopsy of his organs may show why the procedure failed, and orders the scientist behind the procedure (who had been feigning romantic feelings for Freeze) to kill Freeze. He escapes and later returns to Wayne-Powers in a suit he had "kept in cold storage" and freezes Powers and the scientist. Powers survives the attack by melting off his skin and the ice. He attacks Batman and Freeze, and when asked by Batman who he is, refers to himself as Blight, because he is blight on the land because of his powers. Freeze jettisons him from the battle.

His condition worsening and unable to keep up with appearances anymore, Powers decides to withdraw from public life, and summons his estranged son, Paxton, to run his business while he finds a cure for his condition. However, Paxton betrays his father, and exposes him to the world as Blight. Powers hides himself in a nuclear submarine, where Paxton uses a device to usurp Powers' radiation, nearly killing him, but Batman intervenes. Powers then goes berserk with massive radiation bursts that sinks the submarine with him inside. An exchange between Batman and Paxton hints that Powers may have survived.

Blight also makes several appearances in the comic book series based on Batman Beyond.

In Batman Adventures #15, a character named Warren Powers originally appeared as head of Powers Technology. As a sort of prequel to the Batman Beyond episode, "Meltdown", Warren would have been shown acquiring the head of Mr. Freeze and locking it away in his vault, believing it holds the secrets of immortality. It has been confirmed that Warren is the father of Derek.

As his name suggests, Powers has become a living nuclear hazard. Giving off dangerous amounts of radiation even passively that makes it lethal to even be near him let alone touch without some form of protection. Furthermore he can manipulate this radiation into blasts of power, first as only beams but as his powers grew he was able to emit wide range waves of energy. The radiation energy projectiles apparently causes extreme burns and dizziness. Extreme amount of exposure can lead to radiation poisoning. Blight is also capable of transferring heat into other materials, as seen when he irradiated Batman's Batrope and turned it into a glowing ray of light. As in most extreme situations, Blight is known to cause large radioactive explosions around himself.

Powers was also hot in the literal sense, as he would burn anything he was touching. That ability also renders him immune to all kind of melee attacks since the radioactive heat is even capable of melting a high technology Batsuit.

Powers moments after being exposed to nerve gas

Blight in his containment suit. 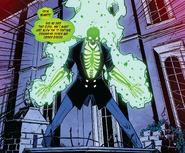