Most Notably Two-Face
Bob Kane (1915-1998) was an American cartoonist and one of the creators of Batman. Since his demise his contributions or lack thereof have been controversial. By all accounts, he is the sole creator of Two-Face / Harvey Kent.

Breaking in to comics

He entered the comics field in 1936, freelancing original material to editor Jerry Iger's comic book Wow, What A Magazine!, including his first pencil & ink work on the serial Hiram Hick. The following year, Kane began working at Iger's subsequent studio, Eisner & Iger, one of the first comic book "packagers" that produced comics on demand for publishers entering the new medium during its late-1930s and 1940s Golden Age. Among his work there was the funny animal feature "Peter Pupp" (which belied its look with overtones of "mystery and menace"), published in the U.K. comic magazine Wags and later reprinted in Fiction House's Jumbo comics. Kane also produced work through Eisner & Iger for two of the companies that would later merge to form DC Comics, including the humor features "Ginger Snap" in More Fun Comics, "Oscar the Gumshoe" for Detective Comics, and "Professor Doolittle" for Adventure Comics. For that last title he went on to do his first adventure strip, "Rusty and his Pals".

Creation of the Bat-Man

In early 1939, DC's success with the seminal superhero Superman in Action Comics prompted editors to scramble for more such heroes. In response, Bob Kane conceived "the Bat-Man". Kane's biggest visual influence for the character was the 1926 silent movie The Bat. In the film, a burglar wore a scalloped batwing cape and mask with two large ears and climbed out of houses with a rope. The character left threatening notes with a bat-insignia and used an early version of the Batsignal, projecting the beam of light on walls.

Bill Finger joined Bob Kane's nascent studio in 1938. An aspiring writer and part-time shoe salesperson, he had met Kane at a party, and Kane later offered him a job ghost writing the strips Rusty and Clip Carson. He recalled that Kane “had an idea for a character called 'Batman', and he'd like me to see the drawings. I went over to Kane's, and he had drawn a character who looked very much like Superman with kind of ... reddish tights, I believe, with boots ... no gloves, no gauntlets ... with a small domino mask, swinging on a rope. He had two stiff wings that were sticking out, looking like bat wings. And under it was a big sign ...BATMAN.”

Finger said he offered such suggestions as giving the character a cowl and scalloped cape instead of wings; adding gloves; leaving the mask's eyeholes blank to connote mystery; and removing the bright red sections of the original costume, suggesting instead a gray-and-black color scheme. Finger additionally said his suggestions were influenced by Lee Falk's The Phantom, a syndicated newspaper comic strip character with which Kane was familiar as well. Finger, who said he also devised the character's civilian name, Bruce Wayne, wrote the first Batman story, while Kane provided art. Kane, who had already submitted the proposal for Batman at DC and held a contract, is the only person given official company credit for Batman's creation. Comics historian Ron Goulart, in Comic Book Encyclopedia, refers to Batman as the "creation of artist Bob Kane and writer Bill Finger".

According to Kane, “Bill Finger was a contributing force on Batman right from the beginning. He wrote most of the great stories and was influential in setting the style and genre other writers would emulate ... I made Batman a superhero-vigilante when I first created him. Bill turned him into a scientific detective.”

The character debuted in Detective Comics #27 (May 1939) and proved a breakout hit. Within a year, Kane hired art assistants Jerry Robinson (initially as an inker) and George Roussos. Shortly afterward, when DC wanted more Batman stories than Kane's studio could deliver, the company assigned Dick Sprang and other in-house pencilers as "ghost artists", drawing uncredited under Kane's supervision. Future Justice League writer Gardner Fox wrote some early scripts, including the two-part story "The Monk" that introduced some of The Batman's first "Bat-" equipment.

In 1943, Kane left the Batman comic books to focus on penciling the daily Batman newspaper comic strip.[4] DC Comics artists ghosting the comic-book stories now included Jack Burnley and Win Mortimer, with Robinson moving up as penciler and Fred Ray contributing some covers. After the strip finished in 1946, Kane returned to the comic books but, unknown to DC, had hired his own personal ghosts: Lew S. Schwartz from 1946-1953 and Sheldon Moldoff from 1953-1967.

Bill Finger recalled that, “Robin was an outgrowth of a conversation I had with Bob. As I said, Batman was a combination of [Douglas] Fairbanks and Sherlock Holmes. Holmes had his Watson. The thing that bothered me was that Batman didn't have anyone to talk to, and it got a little tiresome always having him thinking. I found that as I went along Batman needed a Watson to talk to. That's how Robin came to be. Bob called me over and said he was going to put a boy in the strip to identify with Batman. I thought it was a great idea.”

Kane, who had previously created a sidekick for Peter Pupp, proposed adding a boy named Mercury who would have worn a "super-costume". Robinson suggested a normal human, along with the name "Robin", after Robin Hood books he had read during boyhood, and noting in a 2005 interview he had been inspired by one book's N. C. Wyeth illustrations. “The impetus came from Bill's wanting to extend the parameters of the story potential and of the drama. He saw that adding a sidekick would enhance the drama. Also, it enlarged the readership identification. The younger kids could then identify with Robin, which they couldn't with Batman, and the older ones with Batman. It extended the appeal on a lot of levels.”

The new character, orphaned circus performer named Dick Grayson, came to live with Bruce Wayne as his young ward in Detective Comics #38 (April 1940) and would inspire many similar sidekicks throughout the Golden Age of comic books.

Batman's arch-foe the Joker was introduced near that same time, in Batman #1 (Spring 1940). Credit for that character's creation is disputed. Robinson has said he created the character. Kane's position is that “Bill Finger and I created the Joker. Bill was the writer. Jerry Robinson came to me with a playing card of the Joker. That's the way I sum it up. [The Joker] looks like Conrad Veidt — you know, the actor in The Man Who Laughs, [the 1928 movie based on the novel] by Victor Hugo. ... Bill Finger had a book with a photograph of Conrad Veidt and showed it to me and said, 'Here's the Joker'. Jerry Robinson had absolutely nothing to do with it. But he'll always say he created it till he dies. He brought in a playing card, which we used for a couple of issues for him [the Joker] to use as his playing card".”

Robinson, whose original Joker playing card was on public display in the exhibition "Masters of American Comics" at the Jewish Museum in New York City, New York, from Sept. 16, 2006 to Jan. 28, 2007, and the William Breman Jewish Heritage Museum in Atlanta, Georgia from Oct. 24, 2004 to Aug. 28, 2005, has countered that: “Bill Finger knew of Conrad Veidt because Bill had been to a lot of the foreign films. Veidt ... had this clown makeup with the frozen smile on his face (classic). When Bill saw the first drawing of the Joker, he said, 'That reminds me of Conrad Veidt in The Man Who Laughs.' He said he would bring in some shots of that movie to show me. That's how that came about. I think in Bill's mind, he fleshed out the concept of the character.”

Early on when giving interviews, Kane would point toward Douglas Fairbanks' movie portrayal of the swashbuckler Zorro due the similar cliches it shares from the Scarlet Pimpernel literary template. The inspiration for the cave hideout had actually come from The Phantom movie serials, which heavily influenced the Lewis Wilson Columbia serial. It also became necessary to create cover stories that lead the public away from the The Shadow pulps and the work of Walter Gibson and Theodore Tinsley. Eventually Kane contrived a story about taking inspiration from Leonardo da Vinci's diagram of the ornithopter, creating a forgery drawing and passing it off as his earliest Batman sketch. This has been debunked by historians through obvious timeline discrepancies, the drawing itself was carbon dated for finality.

As Kane's comic-book work tapered off in the 1960s, he parlayed his Batman status into minor celebrity. He enjoyed a post-comics career in TV animation, creating the characters Courageous Cat and Cool McCool, and as a painter showed his work in art galleries, although even some of these paintings were produced by ghost artists. In 1989, Kane published the autobiography Batman and Me, with a second volume Batman and Me, The Saga Continues, in 1996.

He was set to make a cameo appearance in the 1989 movie Batman as the newspaper artist who prepares the drawing of the "Bat-man" for Alexander Knox, but scheduling conflicts prevented this. Kane's trademark square signature can still be seen clearly on the drawing. In the novelization of the movie, the character is identified as "Bob the cartoonist."

Kane died on November 3, 1998, from natural causes, leaving behind his wife, Elizabeth Sanders (Kane), an actress who appeared in three Batman films, a daughter, Deborah Majeski, and a grandson. Kane is buried at Forest Lawn - Hollywood Hills Cemetery in Los Angeles, California.

Note: Whilst he did co-create Mr. Freeze aka Mr Zero, he did not create his alter ego Dr. Victor Fries.

with Adam West and Frank Gorshin

Kane with Michael Keaton on the set of Batman

Kane with Keaton on the Batman Returns set 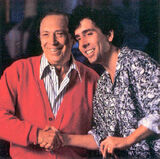 Kane with Tim Burton on the Batman Returns set

Kane at the premiere of Batman Retuns

Kane with Val Kilmer on the set of Batman Forever. 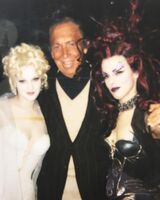 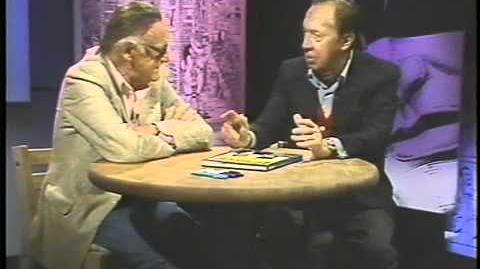 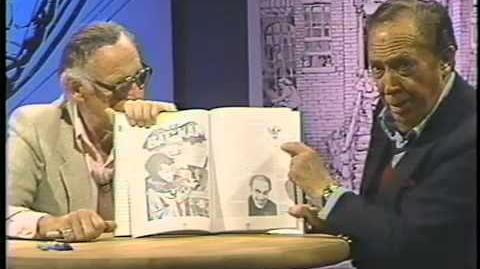 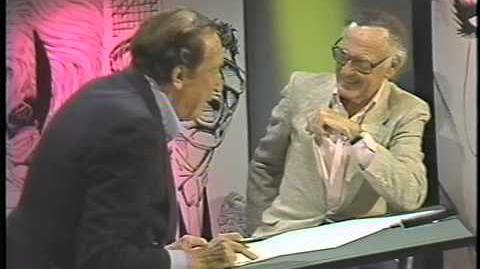 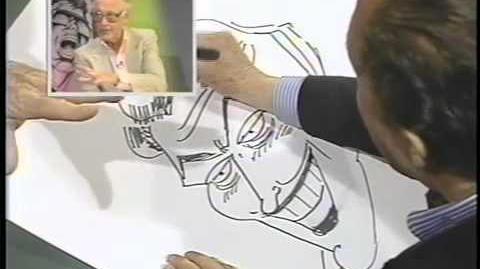