"Very funny. You should've had more gore under the fangs though, right? He he he... what a dick."
―Alexander Knox[src]

Bob Kane was a newspaper cartoonist who worked for the Gotham Globe. He showed Alexander Knox a drawing of a vampire bat with a man's body. A caption was included that read "Have you seen this man?". 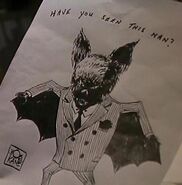 Bob's cartoon of a "Bat-Man".
Add a photo to this gallery
Retrieved from "https://batman.fandom.com/wiki/Bob_Kane_(Denis_Lill)?oldid=206374"
Community content is available under CC-BY-SA unless otherwise noted.