"Bob, remember, you are my number one guy."
―The Joker, imitating Carl Grissom[src]

Bob the Goon was the Joker's close and trusted friend and first lieutenant among the Joker Goons, until he was shot by Joker. Bob had shoulder-length blond hair, chin stubble, and a scar on his left cheek. Like the Joker's other followers, Bob was regularly seen wearing a dark purple leather jacket adorned with Joker themed patches and sunglasses. The maximum number of joker card patches on Bob's right shoulder indicated his top rank in the gang.

Bob's personality was darkly jovial, as he was fond of laughing at his boss's morbid yet witty comments.

During Jack Napier's career in the mob, his most loyal enforcer and friend was Bob, who defended and protected Jack wherever he went, according to Jack. Bob was always busy trying to accommodate Napier, even in little things such as straightening the mirror or polishing the door handle on Jack's Car.

In one incident, Lt. Eckhardt pulled his gun on Jack, and Bob immediately went to his friend's aid, and stood close to him while he aimed his own gun at Eckhardt.

Bob accompanied Jack to Axis Chemicals. Bob nervously weaved back and forth as the Torchman finally cut through the safe, which was found empty. The group then realized that it was a setup and exited the room carefully. Bob then entered a firefight with the GCPD soon after. Bob threatened Batman to let Jack go and pressed his pistol to the side of Commissioner Gordon's head. Bob then made his way toward the exit and called for Jack to follow. After he saw Batman seemingly drop his friend into toxic waste, Bob made a hasty retreat from the facility as the GCPD continued to arrive.

Even after the incident that disfigured Napier and shattered his sanity, Bob still remained a steadfast Aide-de-Camp to the newly-dubbed "Joker". Bob was always dutifully present at the Joker's side, no matter what the circumstances: Bob led the Joker's new personal army of goons and continued to perform many chores for Joker. After he witnessed Joker kill Boss Rotelli with a high-voltage joybuzzer, the other Gotham City Crimelords were dismissed. Joker then appointed Bob to investigate Alexander Knox to find out everything that he was trying to dig up on Batman. Before he was left to that task, Bob was then reminded by Joker of him being his "number one guy" in a very similar manner to how Carl Grissom had told Napier himself just prior to the failed Axis Chemicals Heist.

Bob scouted City Hall in his usual attire while Joker and the rest of his goons posed as street mimes and planned an unsuspected mob hit on Vinnie Ricorso. Bob took photos as from behind cover while the mime goons distracted the onlookers.

After the massacre at City Hall, Joker decided to move their operations from Grissom's Penthouse to Axis Chemicals. After he draped elegant fabrics around the pipe works, Joker created an office and a photo collage room. Bob often watched Action News Reports with Joker there. In the collage room, hundreds of photos that were taken by the pair were scattered on the floor and table and where Bob presented photos and information that he collected on his excursions downtown. When Bob brought back his report on Knox, he told Joker of his partner, Vicki Vale, to whom the Joker became romantically obsessed. After he saw her photo, Joker tasked Bob with bringing him the phone book.

When the Joker arranged to meet Vicki at the Flugelheim Museum, Bob enjoyed himself while he vandalized the priceless paintings with a large knife, although Joker stopped him from carving up Francis Bacon's Figure with Meat. Bob later carried the Joker's cane and escorted Alicia Hunt from the Joker Van (as Alicia was unable to walk by herself).

Shortly thereafter, Batman crashed through the overhead skylight, rescuing Vale after firing a zipline to the main entrance. While the rest of the gang immediately gave chase, Bob and Lawrence stood beside Joker as he pondered where Batman got such devices. A smoke bomb had been dropped at the doors, confusing the gang for a couple of minutes. Bob emerged through the smoke with Joker's cane still in hand.

Bob and the rest of the gang jumped into their Joker Goon Cars and pursued the Batman's vehicle. Eventually, Batman and Vale jumped out and continued to flee the gang on foot. After they cornered Batman in an alley, the gang emerged from their vehicles, both the Tall Joker Goon and the Fedora Joker Goon goon each fired a shot into Batman's chest after the Overweight Joker Goon struck Batman's back with a pipe. The group then realized that there was no blood and observed that Batman appeared to wear body armor. Bob, when the courage returned in his voice, then ordered Batman unmasked. Vale took a photo of the group next to the unmasked Batman, which then prompted Bob to order her shot. Batman stopped playing dead at that point and the other henchmen were quickly taken down. Bob stood back during the melee and witnessed a Swordsman Joker Goon flip over a fence and fight Batman, but didn't last much longer. Bob himself was then challenged by Batman, but then dropped his knife and fled the scene.

Bob accompanied Joker and Lawrence to Vale's apartment the following day and carried a large gift box. Bob silenced Vale's scream after Joker apparently shot Bruce in the chest and killed him with a small derringer.

Bob helped distribute cash to the crowd from a garbage bag while Joker danced and posed to the song "Trust." Bob met his end after Batman ruined the Joker's scheme to poison the public at Gotham City's 200th Anniversary Parade with Smylex. The Joker, looking for somebody to take his anger out on, asked Bob for his gun. Bob immediately obeyed and was then shot and killed. "I'm gonna need a minute or two alone, boys", Joker then said in a moment of mock reflection. Bob's revolver was then handed to the Fedora Joker Goon, who enthusiastically carried out the order. 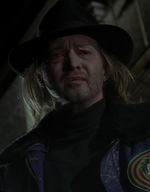 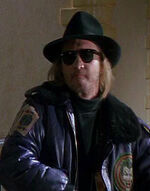 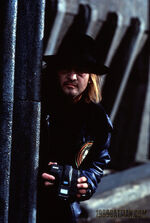 Retrieved from "https://batman.fandom.com/wiki/Bob_the_Goon?oldid=220605"
Community content is available under CC-BY-SA unless otherwise noted.