The Penguin
Burgess Meredith portrayed the Penguin in William Dozier's ABC television series, as well as the 1966 spinoff film. Meredith's portrayal of the Penguin tied with Cesar Romero's Joker as the most frequent appearance of a villain on the show, and was in fact so popular that the writers always had an episode script featuring the Penguin ready whenever Meredith was available. Meredith also released a 45 single as the Penguin like Frank Gorshin's Riddler.

Characters portrayed by Burgess Meredith in the Batman Universe

His trademark "quacking" sound had been created to prevent the non-smoking Meredith from ruining takes by coughing whenever the frequently-smoking Penguin smoked.

Outside of Batman, made numerous appearances as different characters in four episodes of the original Twilight Zone. Perhaps most notable of these was the main character in the episode "Time Enough at Last". Playing a timid banker, ridiculed by his wife and employer for constantly wanting to read, he unwittingly becomes the sole survivor of a nuclear holocaust. Initially despondent at being alone, his despair turns to joy upon discovering the ruins of the public library, with a lifetime's worth of books to read, and all the time in the world to read them. Tragically, this is cut short when his glasses fall off and break, leaving him unable to read.

In the 1970s, Meredith was nominated for a Best Supporting Actor Oscar two years in a row, in 1975 for The Day of the Locust, and in 1976, for one of his best-known roles, that of Rocky Balboa's trainer in Rocky. Meredith would reprise the latter role in second, third, and fifth films of the series.

One of his final roles was that of Jack Lemmon's character's cantankerous elderly father in the 1993 comedy Grumpy Old Men. His return in the 1995 sequel Grumpier Old Men would be his last film role. 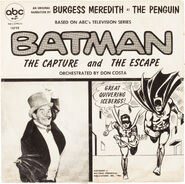 Batman: The Capture And The Escape single