Selina Kyle
Holly Robinson
Catwoman has razor sharp claws on her gloves. The claws are her earliest and most essential weapon, before even taking up the bullwhip.

The claws can also be used to scale buildings and cut glass cases during heists.

In her first costume made in the apparent she shared with Holly Robinson, claws were on Selina's gloves. The media was discrediting Batman for her early endeavors. To establish herself on the scene she began using her claws to "mark" her enemies starting with her pimp, Stan. She also left permanent scarring on Carmine Falcone's cheek.

Later as her wealth grew she constructed stronger retraceable claws on her gloves and boots to scale buildings.

In combat her claws have been shown to be strong enough to damage Cyber Cat's power armor.

Originally Selina scratched people with her actual fingernails in The Batman vs. the Cat-Woman written by Bill Finger in Batman #3 (September 1940). By the The Princess of Plunder story in Batman #10 (April 1942) she was wearing clawed gloves. They have since become a staple of Catwoman's character, appearing in nearly every major Batman television and movie adaptation to date. In the revamped origin in Batman: Year One she has only claws starting out, not yet taken up use of a bullwhip.

Usage in outside media adaptations

Julie Newmar never really used her claws offensively in television show, only to threaten to intimidate. Instead the Catwoman was shown to rely on male minions to fist fight Batman and Robin for her.

The claws in Batman Returns are shown to be made from found objects in Selina's sewing nook. They are employed in physical confrontations throughout the film, in one scene they penetrate at weak spot in Batman's armor. At the end of the film she sticks the claws into a cable on the Penguin's generator to kill Max Shreck with her stun gun, seemingly using her own body to channel a powerful electrical current.

Halle Berry's claws are shown to be diamond encrusted in the 2004 Catwoman movie. The claws are key in Batman: Arkham City, during Catwoman's combos and finishers.

Catwoman's clawed gloves appeared in the prequel series Gotham, in which Camren Bicondova's young Selina Kyle began using them in the fourth season. During the season 5 episode Penguin, Our Hero, she used her claws to fight the Mutant Leader, inflicting a long scar on his left cheek. In the series finale The Beginning..., which takes place ten years in the future, Lili Simmons' adult Catwoman used her claws to cut a hole into a glass case at the Gotham Museum of Antiquities. 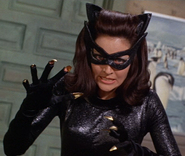 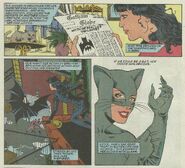 An explanation of the inspiration in Catwoman #0

Retrieved from "https://batman.fandom.com/wiki/Catwoman%27s_Claws?oldid=228908"
Community content is available under CC-BY-SA unless otherwise noted.