The daughter of Danton Black, the Firestorm villain Multiplex, the new Catwoman has the ability to create up to 9 versions of herself, something quite useful when she is executing her heists

The girl who would become Catwoman inherited her father's duplication powers. However, where her father could create limitless copies of himself, she can only create up to nine. Using her physical skills and donning a high-tech costume, she took up the mantle of legendary Gotham criminal, Catwoman. Thus, the legendary rivalry between Batman and Catwoman was reborn.

Though originally at odds with the new Dark Knight, the new Catwoman developed a soft spot for the new Dark Knight. Though a thief, she had her own code of conduct, morals and ethics, and after being guilted by Bruce Wayne, aided the Tomorrow Knight against a resurfaced Hush, who ended up being a failed clone of Dick Grayson.

Self-Duplication: Catwoman has the ability to create up to nine physical copies of herself. She can cause these clones to appear and disappear at will, giving the impression she can be in more than one place at the same time.

Catwoman, like her predecessors of the name, is a gifted athlete and Olympic-level gymnest and acrobat. She uses these skills to great effect as a high-rise cat burglar.

Like the new Batman, Catwoman wears a high-tech exo-suit that enhances her physical skills to superhuman levels. 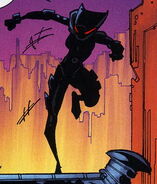 Catwoman breaking into a highrise 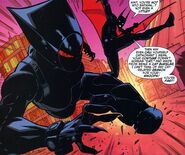 Catwoman unmasks and reveals her backstory

Catwoman coming to Batman's aid
Add a photo to this gallery
Retrieved from "https://batman.fandom.com/wiki/Catwoman_(Batman_Beyond)?oldid=220343"
Community content is available under CC-BY-SA unless otherwise noted.